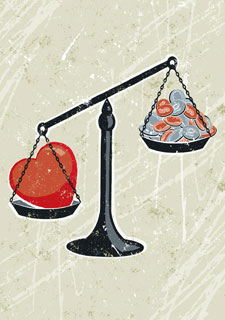 “What’s St. George’s mission statement?” a member of our finance committee asked me.

My answer was straightforward, though I think it took him back: “We don’t have one.”

This committee member, you see, was drafting an endowment policy. Based on best practices from around the church, this policy has emerged from a conversation we’ve been having at St. George’s, Valley Lee: how can we most effectively put the financial resources of our parish into mission and ministry, first and foremost? What he was looking for, from me, was a nice introductory section to a thick financial document, something about the particularities of St. George’s Episcopal Church.

I’m afraid I must’ve flunked ‘Rector School’ because I haven’t forced the leadership of this parish to write a comprehensive mission statement. Truth be told, I’ve found a few mission statements in past records. And depending on whom you ask you might get a more definitive statement than I gave. I just don’t think mission statements motivate much, and I know the energy spent in creating them is in no way equal to the returns from having one.

My terse response, however, led to a bigger – and better – conversation.

“What do you mean?” one asked.

“The church doesn’t have a mission that’s distinct from God’s mission,” I responded, “and that’s spelled out in the Prayer Book [*I didn’t point out that even the 1979 phrasing still talks about the mission of the church, not the mission of God]: ‘to restore all people to unity with God and each other in Christ,’” I edited.

In this, we were talking about the abundance of God and the breadth, the radical inclusivity of God’s Kingdom. And that awareness, in itself, turned this from a conversation about a financial document with a theological introduction to discerning a theologically sound, mission centered, financially feasible framework. In that difference lies a world of difference.

It’s one thing to talk ‘mission’ and ‘ministry’ – and even practice it with formation activities and pastoral care and worship and preaching and service. It’s another thing entirely to embed mission in the harder, less visible connection to the work of finance committees or, dare I say, buildings and grounds committees. And yet when that happens, when God’s mission in the world is no longer an add-on to our corporate life but, instead, the only reason why we are constituted as members of Christ’s Body – a corporation all its own – that’s when real change begins to set in.