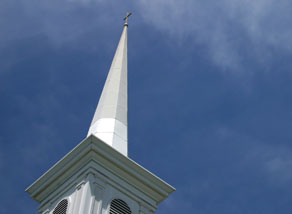 When thinking about your congregation's debt, it’s important to ask a few key initial questions:

In recent years, debt retirement capital campaigns have grown in popularity. Sue Fornabai, ECF Capital Campaign consultant, tells a beautiful story of a parish’s campaign that was not only successful but it inspired its parishioners in the process.

“About 10 years ago in Florida hurricanes tore through neighborhoods. When you drove past many churches ---the roofs were covered with blue tarps valiantly trying to protect what was spared.

“In fact, the Junior League took on an unusual approach for their Annual Christmas Tree Fundraising Event. They had small villages clustered under the trees with the houses, stores and churches wrapped in blue tarps!

“I was asked to assist a church that had suffered significant damage including the loss of the steeple. Insurance covered some of the loss, but a debt was taken to complete the repair.
“For many, the steeple was a symbol. It stood as a marker that the parish remained constant despite the storm.

“We had a very successful fundraising capital campaign. While the debt was taken early on to pay for repair costs, the income from the campaign went to pay back the debt as quickly as possible.

“During the campaign, we were fortunate enough to time the repair of the campaign with our asking of gifts. I was there the day the steeple arrived on a VERY LONG flatbed truck. Then there was a pause.... it seems no one had checked on zoning for height restrictions!! Well, with many prayers and good conversation between the rector and the city… God prevailed and the steeple was raised!”

In answering the first three questions, consider what the impact on your mission would be if debt were to be paid off. When thinking about debt retirement campaigns, it’s important to focus on mission and ministry, not on the debt itself.

Has your parish been impacted by debt? What have been key strategies in planning for/achieving its retirement?