Revolution brews in the baptismal font

“You are troublemakers,” charged Tom Ray, retired bishop from the Diocese of Northern Michigan, which has been on the forefront of the Total Ministry movement in the Episcopal Church for the past twenty-five years. “This is serious stuff.”

Ray was speaking to a roomful of lay people from a dozen churches in one of the dioceses south of the Mackinac Bridge, which divides his Upper Peninsula diocese from the three other Michigan dioceses.

Since Ray’s consecration in 1982, Northern Michigan has become the principal theater for developing, teaching, and living the model of Mutual Baptismal Ministry (aka Total Ministry). And since his retirement ten years ago, Ray has become a road warrior and advocate for this creative model of ministry. His Episcopal successor Jim Kelsey, who had served as the Coordinator for Ministry Development in the diocese before his election, kept the home fires burning until his death in 2007. Kelsey and the Ministry Support Team advanced the understanding and application of Mutual Ministry throughout the church, hosting a twice-a-year “visitors weekends”— for people to actually experience the process firsthand.

The Mutual Baptismal Ministry model — wherein members form teams to take up different pieces of ministry, including sacramental roles — has emerged as an empowering option for small rural and urban churches that can no longer afford full-time, seminary-trained ordained priests. Although financial challenges often serve as a catalyst for exploring Mutual Ministry, the model is not based on scarcity of resources, Ray insists. Rather, the theology that undergirds the model helps congregations recognize and nurture the plentiful gifts of leadership that already reside within a church community.

While some view Mutual Baptismal Ministry as a radical departure from the normative one-parish/one-priest model of parish life, Ray sees it as just the opposite — that the emphasis on ordained leadership has obscured the primacy of baptism in ministry development. This model restores it.

“In Total Ministry, the whole congregation is working together,” says Jo Gantzer, ministry developer for ten congregations in the Diocese of Michigan. “We facilitate the congregations seeing themselves in a new way or finding ministries that they did not realize are already embedded in them.”

Ray also points to a consumer mentality about church life that leaves the ministry to church professionals and further sequesters the laity in the secular world — a breach that threatens the foundation of Episcopal Church principles of faith and practice.

“Our sacramental theology does not separate experience into sacred and secular,” he says. “We do not separate spiritual and material, church and world, Sunday and the rest of the week. Rather they are inseparable.”

Broadening a vision of ministry

The Church, Ray asserts, has lost its vision of ministry as something that can and should happen in every aspect of life, creating instead roles through which laypeople can contribute to church life without threatening the structures that have emerged to protect the institution. Ray appeals for broadening the vision of laypeople and their ministry.

Small congregation are often told, “You’re not viable.’ But what’s viable?” asks Ray. “Many poor congregations without money enough for a priest, are unable to break bread. They must await the arrival of some outsider to supply for them from somewhere else, so they are constantly reminded of their inadequacy and incompleteness as a community.”

The Mutual Baptismal Ministry/Total Ministry model breaks out of that pattern, says Ray, helping the entire Episcopal Church reclaim an essential truth of the Christian faith: that Christians are welcomed into the full life of the church and imbued with the call to ministry as a result of their baptism, not their education or ordination.

“If we can bring all that to help solemnize and energize our lives so that we can live thoughtfully, sacramentally, diaconally, priestly, and apostolically — at home and at work and in the neighborhood — all of a sudden, our Christianity is not something we do on Sunday, but it touches us everywhere at all times and in all places.”

Herb Gunn is editor of The Record, the award- winning newspaper of the Diocese of Michigan and former president of the Episcopal Communicators. 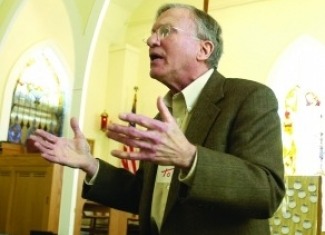