St. Elisabeth's Episcopal Church in Glencoe, Illinois has a tradition of gathering to make Advent wreaths. The Advent Wreath prayers and reflections (available to download further below) were written by my mother (Jean Lea) and me (Anne Lea Tuohy) over the years. "Prayers for Lighting Candles on the Advent Wreath" are the ones presently in use at St. Elisabeth's; unfortunately, I don't remember who created this. These resources were originally developed for church school children and their families and were soon shared throughout the congregation. I first became acquainted with Advent wreaths as a child in the 50's and learned that making and lighting one was a tradition of the Von Trapp family of Sound of Music fame! In their family they used red candles. I later learned that probably white or unbleached candles would have been used originally. Episcopalians, along with Roman Catholics and Lutherans, added the purple and pink to match liturgical colors in our tradition; then blue was later introduced as an Advent liturgical option. Somewhere along the way, the whole thing became commercialized and kits appeared on the market. Some were being offered for sale at our diocesan convention. A fun personal note is that I demonstrated the making and lighting of an Advent wreath on local television when I was around eleven - a big deal in those days! Once we started putting the greens in moist oasis florist foam, it became possible to keep them green for weeks, even beyond Christmas. See the step by step guide in the document below for the process St. Elisabeth's uses to build Advent wreaths. In our house, we change the purple to red for the 12 days of Christmas. By Epiphany, the greens are ready for garden mulch! 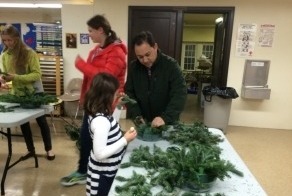