The Goal of One Hundred Percent Giving

Jesus’ standard of giving fits with his overall view of Moses’ law: “You have heard it said,” Jesus says six times in the Sermon on the Mount, “But, I say to you…” It also fits with the practice of the apostolic church, in which no one claimed individual ownership of anything, but sold what they had and gave it to the apostles who distributed the proceeds to all as any had need. For Jesus and for the apostles, discipleship demanded a full measure of devotion – pressed down, shaken together, running over.

On this side of God’s Kingdom, there are obvious practical problems with 100% giving. But the goal of full devotion still applies. We should feel the cost of our discipleship and we should always be striving to do more. If we don’t notice the sacrifices that we are making for our faith, then we aren’t sacrificing enough.

Jesus said, “I came not to judge the world, but to save the world.” The church needs to stop speaking to people as if they were where we wish they were and start meeting them where they actually are.

An effective stewardship program must not limit itself to a single message, because our churches are not limited to a single kind of giver.

There is no one-size-fits-all solution to effective stewardship messaging. The church needs to use an all-of-the-above approach.

Diversifying our stewardship message is critical to the future of the church because the days of people supporting institutions and giving out of obligation are passing quickly.

Youngish adults are proving to be far more outcome-oriented givers than the more institutionalist generations that preceded them, and most of the churches that I know are struggling to activate their generosity. We rationalize this problem by saying that young adults are early in their careers, that they need to be saving for retirement, and that they may have small children at home. While any combination of these things may be true, a recent article from the Forbes Nonprofit Council says that the Millennials were the most generous generation of Americans in responding to the COVID-19 pandemic. A quick visit to GoFundMe.com (which has brought in more than $15 billion since 2010) will reveal even more evidence of Millennial generosity. Young adults are giving; they’re just not giving to the church in the same ways or to the same extent that their parents and grandparents did.

The Forbes Nonprofit Council goes on to suggest that the key elements of activating young adult generosity are relationship and transparency. As leaders in the church, we should hear them quoting Gabriel: “Do not be afraid; for I am bringing you good news!” Relationship is the church’s business and the Episcopal Church’s business practices are far more transparent and audit-worthy than those in many other churches. The Episcopal Church will have a bright future if we can figure out how to do three things:

My congregation recently finished a large capital campaign, and I feel much closer to my parishioners now than I did when we started. Visiting someone’s home for the sole purpose of talking about the role that the church plays in their life is a profound pastoral experience. Demonstrating a willingness to talk about money invites future conversations about other uncomfortable topics.

What pastoral conversations might we have with each kind of church giver?

In every area of our life and faith, the church should seek to meet us where we are and gently and lovingly invite us to deeper levels of devotion. Stewardship is no exception. But meeting people where they are does not mean that they need to stay there. Faith is a journey, and Jesus’ principle of full devotion invites all of us to continue striving towards greater levels of commitment and sacrifice. Until we reach 100% giving, we all have room to grow.

The Reverend Sandy Webb has served as rector of Church of the Holy Communion and trustee of St. Mary’s Episcopal School, both in Memphis, since 2013. He has experience with congregational and staff development, annual and capital fundraising, facility renewal, and maintaining healthy church/school relationships. Before ordination, Sandy served as a lay professional in the Executive Office of the General Convention of the Episcopal Church, where he was involved in the planning and execution of General Convention worship services for fifteen years. 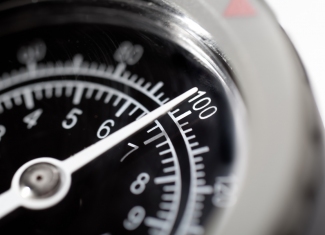