By the Numbers: Mission, Diversity Matter

When we speak of stewardship, we’re often using a theological word for a practical concept: taking care of business. We need to make sure the computers turn on, the congregation is dedicated and supportive, and that the operating budget is met.Through the prism of this concept, we see the Church as we would like it to be.

The flip side of this is the Church, in a larger sense, as it is. How many actual members are there? Is membership on the rise, or on the decline? What is the actual average age of an Episcopalian? How many of us are there, and…how many of us are actually showing up on Sunday?

According to the latest nationwide survey by the Office of Congregational Development at the Episcopal Church Center (current as of 2005), there are 2,205,376 domestic Episcopalians, of which 787,271 actually regularly attend Sunday morning service. The total number of Episcopal parishes and missions is 7155.

The average pledge as of the latest survey is $1,947, up 2.9 percent from the previous year. While it’s always nice to see a gain, the loss overall of a certain percentage of parishioners could account for the median rise in pledging. If, for example, parishes and missions that were financially struggling simply closed their doors, one could see a reduction in overall population, and a rise in the average pledge.

According to these numbers, membership in the Episcopal Church is on the decline, following a national trend of declining membership for most mainline denominations, while evangelical and conservative denominations are seeing growth.

The most recent report, by C. Kirk Hadaway, director of research of the Office of Congregational Development, addresses the decline by highlighting practices within the church that statistically inspire growth. He also compares the performance of the Episcopal Church to other mainline denominations, and addresses the question of whether fundamentalism universally inspires growth. The report includes factors such as location, worship practices, the congregational “identity,” congregational activities and leadership.

Within the report there are some conclusions that are easy enough to discern: strong leadership and active recruitment lead to growth, for example. But there are also several unusual conclusions.

Leadership and passion matter
One is the seemingly counterintuitive relationship between decline and strong conservatism in an Episcopal parish. Hadaway breaks this relationship down to a fine point, noting that the correlation is not particularly strong (48 percent of “strongly conservative” congregations show a decline versus 34 percent “strongly liberal” congregations) and that many dioceses that are known to be particularly conservative show growth on their own. Simply put, the theological basis on which a congregation is founded will not automatically increase growth or pledging as much as other factors, including leadership, recruitment and passion for ministry.

A sense of mission is key
So what can we glean, with an eye on stewardship, from these findings? We can see that while the Episcopal Church’s overall membership is trending downward, there are certain practices and understandings we can adopt for further growth.

A congregation should not see a move towards fundamentalism as necessary for its own growth: in fact, trends imply the opposite. More important than any particular theological bent is, in fact, a sense of mission for the parish.

“Growing congregations are clear about why they exist and what they should be doing,” says Hadaway. “In American religion generally, conservative churches tend to be clearer about their mission and purpose. But this is not the case in the Episcopal Church. Here there tends to be a greater sense of purpose and mission among more theologically liberal congregations.”

One fact in the life cycle of the Episcopal Church certainly needs attention: churches with older members trend towards decline, and, as is noted above, the average age of an Episcopalian trends above fifty. It behooves any stewardship effort to respond, promoting active participation in younger membership and involving families with young children. A surefire way of growing a parish or mission is to focus on capturing and keeping younger parishioners.

Diversity and youth are needed
And while the Episcopal Church’s membership is historically and dominantly white, growth is statistically high where diversity is encouraged and cultivated. Diversity can be just as powerful as youth in promoting growth in a parish.

For further information about trends in growth and to find more about how your own mission or congregation fits into the landscape of Episcopalian demographics, the Office of Congregational Development offers its reports for free on its website: www.episcopalchurch.org/research.htm

A lifelong Episcopalian, Matt Freeman is the Giving Service Associate for the Episcopal Church Foundation and a playwright and actor in New York City. 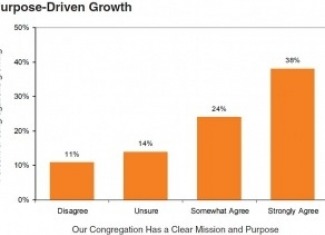 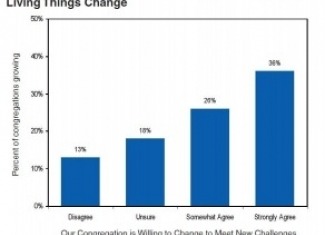