Cultivating a Culture of Discernment

The leadership and oversight of faith communities is critically important. Yet churches too often have vestry members functioning as operations managers, or advocates for a particular committee or project, rather than as spiritual leaders called to focus on the big picture.

The role of vestry members is rarely understood as that of encouraging and cultivating ongoing congregation-wide conversations about what God might be up to in the church and neighborhood. But when vestry members are recruited for their leadership gifts, and when their role is defined as the congregation’s spiritual leaders working as a discernment team with their clergy, the results tell the story.

As Patrick Kiefert points out in his book, We Are Here Now: A New Missional Era, the old ways of doing things no longer work. Strategic five and ten year plans no longer make sense because we have no idea what our community or world will look like in five or ten years. What is needed is continual, faithful listening to God’s leading and our changing world. In such a climate, the most fruitful way a vestry and congregation can operate is like a sailboat — rather than a corporate board — alert and nimble enough to move quickly so they can catch the changing winds of what Kiefert calls the “Holy Gust” or Ghost.

Vestry and clergy as a discernment team

At St. Matthew’s Episcopal Church in St. Paul, Minnesota, we’ve been on a journey of re-envisioning the role of the vestry over the last five years. And while our vestry still fulfills its canonical responsibilities for overseeing the budget and buildings, the canons’ distinction between authority over spiritual matters (rector) and temporal matters (vestry) seems less and less helpful.

In order to be faithful to God’s leading, we have invited vestry members to understand their role as that of a spiritual discernment team.

To this end, our vestry began a regular practice of prayer, and at least twenty minutes of “dwelling in scripture” at the beginning of each meeting. This involves listening to a biblical text and sharing where our imaginations are “caught” or “captured” by a particular passage. When we listen attentively to scripture in community, the Holy Spirit shows up. It does not require a biblical expert; over time the biblical stories become our stories.

While some vestry members initially looked at their feet in awkward silence, within a few months everyone was on time to vestry meetings so as not miss out on what others had to say. When we began to relate the biblical texts to budget discussions, we knew that we were in a new place.

Our understanding and practice of communal discernment of what God is up to has evolved from an occasional activity to our primary calling and focus. In order to enable our vestry to focus on the larger, more complex adaptive challenges our faith community faces, we raised up a management team composed of people in our church with expertise in business and human resources. They are able to take many operational items off the vestry’s plate so the vestry can focus on big-picture issues. We also tried to bump as many property matters as possible to a property team. While the vestry is ultimately responsible for allocating funds for maintenance of the buildings, we knew that we did not need to waste precious time deciding things like what color the parish hall should be, but rather to keep ourselves focused on a “big issue” at each meeting.

Our deepest desires and gifts

Keeping the vestry on track with prayer, dwelling in the word, and engaging in group discernment about major issues and challenges is bearing fruit. St. Matthew’s recently emerged from an eight-month congregation-wide wondering process led by our vestry, aimed at discovering where God was leading us in mission. The question members of our community were asked was, “When the people of St. Matthew’s bring together their deepest desires and greatest gifts, what is the future God is calling forth among us?”

To explore this question we had groups not only dwell in scripture together, but also engage in playful activities. Artists painted pictures of the future they believed God was bringing forth; our youth group and staff took pictures of what they thought God was up to; parents of young children shared their favorite children’s story that revealed something about God; our hospitality team planned a menu embodying the future God is bringing forth; and people constructed visions of our church’s future with Legos.

Through these exercises and theological reflection on what emerged, the gifts and passions of our community and an emerging future are becoming clear. We also had fun and were energized along the way. Our next step will be to learn how to keep the conversation going and to take our “wondering” conversations out into the community to learn from our neighbors.

The reality of a vestry as spiritual leaders, working with their clergy as a discernment team, has made all the difference.

The Rev. Blair Pogue, rector of St. Matthew’s Episcopal Church in St. Paul, Minnesota, developed an interest in group discernment and equipping vestry members to be the spiritual leaders of their congregations while serving as Associate Rector for Adult Christian Formation at Church of the Holy Comforter in Vienna, Virginia. She is currently a Doctor of Ministry candidate in Congregational Mission and Leadership at Luther Seminary in St. Paul.

Learn more of the dynamics of St. Matthew’s discernment process by seeing the vestry's presentation at their annual meeting. See the link to the PDF document below. 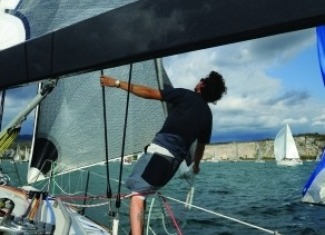