Toward a Cultural Center in Jerusalem

It has taken about seven years for the dream of a school in the Galilean town of Shefa’amr to blossom into the recently dedicated Episcopal Cultural Center—but that’s just one part of “this wonderful story,” according to the Rev. Fuad Dagher, rector of St. Paul’s Episcopal Church in Shefa’amr.

For Dagher, the story is also about the wonders God accomplishes “when people of good will, no matter the distance and geographic place, stand together, side by side and hand in hand,” he said.

“This is one of God’s wonders and miracles in our lives and we are blessed by what has been done,” he added.

The center, dedicated June 11, 2011, is adjacent to the church and includes educational and meeting space, an art gallery and workshop space, and has become a unifying force for the entire community of Palestinian Arabs who are citizens of Israel, and are Christians, Muslims and Druze, Dagher said during a July 15 telephone interview from Ramallah, where he was helping to train diocesan youth as summer camp leaders.

“This wonderful story goes back to a partnership relationship with the people in the Diocese of Los Angeles through Bishop Jon Bruno and Mary Bruno, through Fr. Denis O’Pray when he was rector of the Church of Our Saviour in San Gabriel, and through Sue and Sandy Smock.

“With the help and support of your diocese, we managed to buy a piece of land adjacent to the church, starting a project for ministry and service to the whole community of Shefa’amr,” he said.

This companion relationship grew out of a 2004 Lenten program, “Journey to Jerusalem: Then & Now,” inspired by O’Pray, which led to a parish-to-parish relationship between the San Gabriel and Shefa’amr congregations.

Diocesan Bishop Jon Bruno got involved, which helped lead to a companion diocese relationship between the dioceses of Los Angeles and Jerusalem.

And that led to a creative partnership between the dioceses and congregations. Over time, the partnership has prompted more than 500 Episcopalians from the diocese to make pilgrimages to the Holy Land, including some 80 clergy, according to Sandy Smock, a member of the Bishop’s Commission on the Middle East.

In 2004, during the time of the Church of Our Savior’s first pilgrimage visit, the property next door to St. Paul’s [in Shefa’amr] became available when the owners died.

“After an extended period of prayer and thoughtful exploration, an agreement was reached to purchase this property in a three-way partnership between the Diocese of Jerusalem, the Diocese of Los Angeles, and the Church of Our Saviour. The purpose of this purchase was to enable St. Paul’s to grow and expand its much-needed service and leadership to the community,” recalled Sue Smock.

Bringing the Project to Fruition

Bishop Jon Bruno, who attended the Shefa’amr dedication along with his spouse, Mary Bruno, credited Dagher with bringing the project to fruition. The Los Angeles diocese and Church of Our Saviour each contributed $70,000 toward the initial $150,000 land purchase, he said.

In Israel, Dagher built relationships between all the Christian faiths, the Muslims, and the Druze and raised $120,000 from the local community to renovate the property into a magnificent cultural center.

“Fuad heard God speak and has acted in such a valiant way to make abundance of life, not only for his Episcopal community but for the entire community. He’s become a hero to the people because he believes in them and believed in the power of God to transform the situation,” said Bruno.

There are some 200 Episcopalians in Shefa’amr, located about eight miles from the Mediterranean Sea at the entrance to Galilee. About 60 percent of the city’s 35,000 people are Muslim; 26 percent Christian and 14 percent Druze, a Muslim sect, all of whom live in peace together.

“Culturally, this wasn’t anything anyone had ever done before,” said Sandy Smock. “Fuad’s steadfastness made it happen. He stayed with it. They’d had a school at the church a long time ago and then it was torn down and a parish hall was built. He (Fuad) just decided he’d start with a school and over time it evolved into a new idea, and here we are.”

The dedication included a “spirit-filled” Pentecost worship service at which O’Pray preached. Afterwards, a local Boy and Girl Scout drum corps led a procession from the church around the town, ending at the gates of the new Episcopal Cultural Center.

Bishop Suheil Dawani of the Diocese of Jerusalem led the ceremony, joined by Sheik Josef of the Druze community, Dagher, and Bruno. Local civic leaders spoke, and a concert choir and orchestra of young people provided music.

“It was incredible for me to see all our friends there on the spot, enjoying wonderful music and praying for the community of Shefa’amr,” Dagher said. “We’ve already started doing programs and concerts at the center. One of the things the building will be used for includes art galleries, music and handcrafts workshops, and there’s a wonderful space in front of the building that we will use for concerts and sacred music and other kinds of performances.”

Dagher has already formed a committee made up of church and community members to create additional programs and offerings, including a possible preschool program.

The center has become a unifying symbol for everyone, he added. “Already we’ve been receiving calls from people from the town hall and municipality who want to bring guests and visitors to show them the space and how it was renovated.” “I feel very proud to know it has become an important spot for the city of Shefa’amr.”

“We continue to send pilgrimage after pilgrimage, more than any other diocese,” Smock said. “My hope is that other bishops will take Jon Bruno’s lead and incorporate this as part of their outreach. The Diocese of Jerusalem has a special place within Christianity and the Anglican Communion.”

Dagher agreed, sharing that while the Episcopal Cultural Center project is one way to “strengthen our presence and our ministry and Christian call of mission in the Holy Land,” through it strangers became like family. So much so that he and wife Hanai invited the Smocks to be godparents to their daughter, Reggina, now five years old — “a great privilege,” Sandy Smock said.

“We said this is the way we could thank them for all they’ve done, to have them be part of our family,” Dagher said.

“It’s a modest gesture to tell them that we love you and through them we express our many thanks to so many people, those who have come on pilgrimage. We still want to ask you to come, and visit and see and experience and meet the local Christians, the living stones.”

He added, “For us in the land of the holy one, we need to strengthen our presence, because our presence, whether we like it or not, is threatened and our numbers are dwindling, and this is very serious. I was convinced and am still convinced we need to build up relationships, church-to-church relationships in order to help both sides, your people and our people, to know about each other and learn about each other in a mutual kind of awareness.”

The Rev. Pat McCaughan is the convening chairperson of the Diocese of Los Angeles’ program group on communication and public affairs and senior correspondent for The Episcopal News. 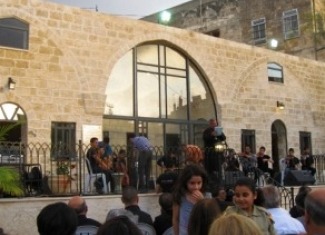