Parable of the Lifesaving Station

On a dangerous seacoast where shipwrecks often occur, there was once a crude little life¬saving station. The building was just a hut, and there was only one boat, but the few devoted members kept a constant watch over the sea, and with no thought for themselves went out day and night tirelessly searching for those who were lost. Some of those who were saved and various others in the surrounding area wanted to become associated with the station and gave of their time, money, and eﬀort to support its work. New boats were bought and new crews trained. The little lifesaving station grew.

Some of the members of the lifesaving station were unhappy that the building was so crude and poorly equipped. They felt that a more comfortable place should be provided as the ﬁrst refuge of those saved from the sea. They replaced the emergency cots with beds and put better furniture in the enlarged building.

Now the lifesaving station became a popular gathering place for its members, and they decorated it beautifully because they used it as a sort of club. Fewer members were now interested in going to sea on life-saving missions, so they hired lifeboat crews to do this work. The lifesaving motif still prevailed in the club’s decorations, and there was a liturgical lifeboat in the room where the club’s initiations were held. About this time a large ship wrecked oﬀ the coast, and the hired crews brought in boatloads of cold, wet, and half-drowned people. They were dirty and sick. The beautiful new club was in chaos. So the property committee immediately had a shower house built outside the club where victims of shipwrecks could be cleaned up before coming inside.

At the next meeting, there was a split among the club membership. Most of the members wanted to stop the club’s lifesaving activities as being unpleasant and a hindrance to the normal social life of the club. Some members insisted upon life¬saving as their primary purpose and pointed out that they were still called a life¬saving station. But they were ﬁnally voted down and told that if they wanted to save the lives of all the various kinds of people who were shipwrecked in those waters, they could begin their own lifesaving station. So they did.

As the years went by, the new station experienced the same changes that had occurred in the old. It evolved into a club, and yet another lifesaving station was founded. History continued to repeat itself, and if you visit that seacoast today, you will ﬁnd a number of exclusive clubs along that shore. Shipwrecks are frequent in those waters, but most of the people drown.

This parable is a remarkably adept appraisal of the tendency of faith communities to turn insular and artiﬁcial. The reasons I ﬁnd it so appealing (as the Episcopal Church Center’s Oﬃcer for Church Planting and Ministry Redevelopment) follow: It was written by one of our own*, a past president of the House of Deputies to General Convention; it uses “parable” format to explore what is, as well as what might be; it skillfully critiques the tendency of religious communities to move toward a “Club” mentality, and it asks us to evaluate the “real time” contribution of faith communities by the actual diﬀerence they make in the lives of their surrounding community.

In the parable, there is a moment when what was a lifesaving station turns into a Club. From there forward, the primary reason for joining that club was the beneﬁt of membership. Previously, the primary motivation was that of serving the souls who normally would have been lost to shipwreck on that rocky seacoast. The impact of that shift is that, eventually, those rescued (now by independent contractors) were no longer welcomed into the clubhouse. They ﬁrst had to be cleaned up and made respectable! Leaders across three denominations and two faiths (lay and ordained) tell me that this part of the parable sounds like a description of their home church.

The Rev. Thomas Brackett is The Episcopal Church Center’s Oﬃcer for Church Planting and Ministry Redevelopment.

*Dr. Theodore O. Wedel, a former Canon of the Washington National Cathedral in Washington, DC, wrote this parable. Ordained as an Episcopal priest in 1931, he served for a time as president of the Episcopal Church's House of Deputies. He penned this parable in 1953. 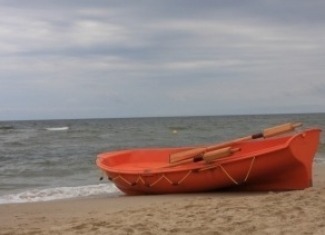