Our Roots
By the time of the American Revolution, the Anglican Church within the new United States of America had already developed characteristics that distinguished it from its parent, the Church of England.

Anglicans in the former British colony organized themselves into a new kind of church, modeled uniquely after their new government, with the first church Constitution the world had ever known, and with its own Prayer Book. Despite the political and ecclesiastical break with England, the founders of the Episcopal Church retained the historic orders of bishops, priests, and deacons, yet also determined that the church would be governed democratically through councils of both clergy and laity. From the beginning, laity played a central role in the governance of the church, founding congregations, calling clergy, and providing for the spiritual and social welfare of their communities. As was the case in the government of the new nation, a great deal of authority was vested at the local level.

When the American church finally obtained bishops – creatively running an “episcopal” church for over 200 years without them – these bishops, as did other clergy of the era, had to establish their authority by preaching, teaching, and administering and raising funds, without the government backing as they experienced in Britain. Much of the struggle in shaping the identity of the early Episcopal Church involved developing structures and a mission for a church that was to be a democratic institution, yet grounded in ancient traditions, and radically responsive to its new context.

Our Values
The governance of the Episcopal Church today shares many of the same values as our eighteenth-century ancestors. We are a church that values representative government and democratic participation by all the orders of the church. We value spiritual freedom and shared authority. We trust that people in churches can govern local affairs. We respect diversity, and at the same time strive to build unity across our differences. We believe in the importance of the legislative process, and through the General Convention, we gather every three years to govern our church as one of the largest legislatures in the world. The Episcopal Church invests a great deal of confidence in its people’s ability to govern. In a real sense, to be Episcopalian is to participate in the governance of the church. At the same time, it takes practice to effectively participate in the structures of the Episcopal Church. That is why it is so important that we preach and teach our unique heritage as a means to furthering democratic participation in the governance of the church.

The liturgical renewal movements of the 1950s and 1960s that emphasized the importance of baptism and the priesthood of all believers, further emphasized the idea that all the baptized have a role in the ministry and governance of the church. The 1979 Book of Common Prayer with its renewed emphasis on baptismal living communicates a vision of the ministry of the church as carried out by the whole people of God, and thus, has deep implications for how we govern if we are to be faithful Christians. In the Episcopal Church we believe that authority for ministry comes with our baptism. The recovery of baptismal living through the Prayer Book builds the life of the church around two interrelated focal points; the life of the community through worship, mutual care, and learning; and, mission through reconciliation, servant hood, and proclamation. Ministry is showing forth Christ to the world in all of these ways; governance involves our participation in the structures and processes that support ministry. If we are to be faithful to our mission in the world, then the church cannot be a static, self-involved institution. Rather, the baptized are called to participate in a church that is always changing, that is mission-centered, and that concerns itself with the larger world and all of creation.

Looking towards our Future
Many stressed nonprofit organizations today, including churches, are now asking questions about the degree of governance the church requires; how do we balance the need for order by an equally strong need for creativity and risk-taking? Key to baptismal living in church governance is the acknowledgement that church structures have, at times, stifled the generosity of the Spirit with a need for control. This acknowledgement is in no way a criticism of the many who exercise profound ministries faithfully every day. But is does speak to the realities of many small congregations and dioceses where diminishing numbers face expanding workloads and feelings of frustration as they perpetuate models of governance that are outmoded and out of balance with the priorities of ministry and mission in a particular place.

The late Jim Kelsey, former bishop of the Diocese of Northern Michigan, believed that the heart of baptismal living is the shift from consumer-based to participatory ecclesiology and realigning church structures from providing ministry for members of congregations as clients, to models where governance is shared and there is mutual respect between laity and clergy. Many congregations and dioceses in the Episcopal Church do not have the ability to sustain multiple staff positions or complicated committee structures now or in the foreseeable future. Rather, effective church governance today depends on leaner models of church and ministry which better utilize the available gifts and skills of all. The earliest Christian communities were governed by structures that were fluid and adaptive, and that enabled them to grow and to respond creatively in the midst of enormous challenges. So, too, our structures of governance need to be re-evaluated and reshaped to allow our churches and dioceses to thrive. As people of faith, we know that the reign of God will not ultimately be built on how many committees we have, but on the way we shape our communities and the quality of life therein – new life, not just reordered life.

Baptismal living, as a recovery of ancient forms of church governance, is an opportunity for congregations and dioceses, as well as the church as a whole, to incarnate the life and freedom of the gospel. Answers to these concerns are embedded in our understanding of Episcopal polity and our Anglican heritage, both of which inform our distinctiveness within the Christian tradition, and offer pathways in how to govern our communities, and to work toward the healing and wholeness that the world craves.

Sheryl A. Kujawa-Holbrook is a priest of the Episcopal Diocese of Los Angeles, an educator, historian of religion, and practical theologian. She is currently professor of practical theology and religious education at Claremont School of Theology, and professor of Anglican Studies at Bloy House, the Episcopal Theological School at Claremont. In addition to her work as a teacher, workshop, conference and retreat leader, she is the author of a dozen books and numerous articles, reviews and curricula. 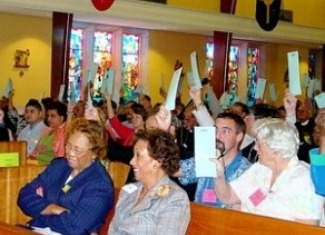