Small churches have always had an important place in the Episcopal Church. They create and sustain faith communities in rural villages and inner cities. They are intimate and many have existed for generations.

By the end of the 20[1] century, the economy took a downward turn. Mills, long since closed, never reopened. Large corporations moved out of the country for cheaper labor, and the high-tech bubble burst. New England—and Western Massachusetts in particular—were hit hard.

Recognizing that something needed to change, the Diocese of Western Massachusetts convened the Berkshire Summit, inviting congregations to participate in a visioning exercise. Attendees were asked to imagine there was no Episcopal Church in their community. And, if given x amount of resources (time, talent, and treasure), how might you go about planting an Episcopal Church?

Following the Summit, some participating churches created pathways to renewal; some discerned the call to dissolve and intentionally “ended well.” What follows is the story of how two Berkshire County congregations – one who started the process voluntarily and another for which it took a wall falling down – found each other and became Grace.

In July 2008, a stone wall collapsed at St. James’ Church in Great Barrington. Access to the building was forbidden; like the Israelites fleeing Egypt, the congregation needed to find a new home. Immediately.

The laity rose to the challenge. The senior warden, an executive at the local hospital, arranged for use of their conference room for worship as well as for vestry and committee meetings. Others began to look for a larger space for Sunday worship, quickly settling on Crissey Farm, a local reception hall. Volunteers came forward to set up and break down the worship space each Sunday morning.

The executive committee and vestry quickly began to deal with the aftermath of the collapse. “With no handbook to follow, the planning and engineering skills of the lay leadership team were invaluable as we charted a course for the future, learning to trust that God would walk with us,” said Francie Hills, rector of St. James, Great Barrington.

“The process was daunting,” continued Francie. “There were meetings with engineers, insurance appraisers, architects, and various inspectors. Decisions needed to be made about next steps. We looked to our diocese for support and guidance. What were our options? Were they realistic?”

The vestry drew on the skills learned through the Diocese’s Partnership for a Missional Church initiative. Modeled after Luther Seminary’s Vibrant Congregations Project Partnership for a Missional Church invites groups of congregations to discover God’s specific call for them to move beyond doing mission to being missional in attitude, vision, and action. With its focus on listening to scripture as well as the people in the congregation and the community, congregations develop greater capacity for spiritual discernment of where they are, who they are, what God is doing in their midst, how God is sending them, and to whom God is sending them.

Three committees were set up to explore three scenarios:

“Our committees followed a careful process, gathering input from both parishioners and experts,” shared Hills. “Reports were made and shared with the congregation. Almost a year after the wall fell, the congregation was ready to make a decision about the way forward.”

The night before the vote, Francie received a call identifying a potential buyer for the property.

The vote was taken, with the congregation almost evenly split between all three options. The vestry made the decision to sell.

As the vestry negotiated the practical aspects related to the wall falling in, the congregation continued to listen for what God was calling them to do. As Advent 2008 approached, a parishioner affiliated with a local farm center invited the children to the farm to make Advent wreaths to deliver to people who were homebound. As the children worked on their wreaths, one of them observed “Wouldn’t it be great if we had a garden to feed hungry people?” After a conversation with the farm’s owners, 1/3 of an acre was set aside and Gideon’s Garden was born.

Five years later, the garden has grown to 3+ acres, with children from the across the area tending it. Teenagers who started farming as children serve as supervisors, people unaffiliated with the church drop by to help tend the crops. A bench offers a place for quiet contemplation and students and staff from a local school for troubled youth came and worked in the garden, taking what they learned to set up a garden of their own.

On Sundays, the shared stories from the garden – mixed in with the warden’s reports on the building situation – helped the congregation stay focused on their mission and ministry.

For the past 10 or more years, the people of St. George’s, Lee pondered their long-term future. The area was not growing, and the large majority of town residents were Roman Catholic. In 2006, they called the Donna J. Trebilcox as their rector to help them either thrive or close with dignity.

After many parish meetings which helped solidify their sense of being as church people – or, put another way, what they as individuals could bring to the life of a parish - they discerned a third alternative: identify vital ministries, such as the Lee Pantry, that they wished to pursue and look for other Episcopal congregations with similar vision that they might join with.

By the late fall of 2010 St. George’s had a buyer for their building and their priest accepted another call. They had also discerned that St. James was a congregation with a similar vision and reached out to their leadership. Francie shared, “They asked if they could come and ‘hang out’ with us at St. James.”

In Advent 2010, the two homeless congregations began worshiping together at Crissey Farm, with parishioners from St. George’s quickly invited to participate in the Rota, altar guild, and hosting coffee hour. Both congregations continued the community ministries that were so important to both.

In January 2011, Frances A. Hills, St. James’ rector, also became the vicar of St. George’s. Soon after, both congregations discerned that they were of kindred spirit and wanted to be together in mission and ministry. In 2012 they legally consolidated, and on January 1, 2013, began operating as a new parish: Grace Church, An Episcopal Community in the Southern Berkshires.

“We did not want a combined name when the churches consolidated,” explained Francie, now rector of the new parish. “We chose a new name that reflected our having been surrounded by grace on every side through this entire process.”

In that metamorphosis, members of Grace church go out into the community as one parish with their life-giving missions, including Lee Pantry, People’s Pantry, and Gideon’s Garden.

Frances Hill is the rector of Grace Church, an Episcopal Community in the Southern Berkshires. Deborah Johansen Harris is the communications director and missioner for the Diocese of Western Massachusetts. 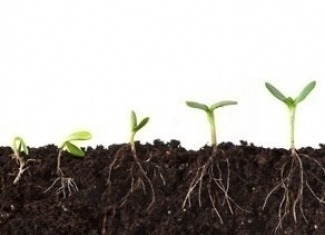