God Had a Hand in This

Leslie Lazenby was devastated. After she had made all the plans for a community garden in Madisonville, Texas, her hopes were crushed when her grant application was denied in February 2012.

“I had a fit with the Lord because we had been building up to the point where I knew that this was going to come together, and then I didn’t have the money to do it,” said Lazenby, a program assistant for Texas AgriLife Extension.

The following day, February 2, the Rev. Debbie Daigle, vicar of Holy Innocents Episcopal Church in Madisonville, walked into Lazenby’s office with her own vision for a community garden. Daigle had the funds but hadn’t been able to raise the support for her dream of a community garden that would nurture body and soul in the small East Texas town. Even though the church was across the street from Lazenby’s office, the two had never met, and they knew this wasn’t just a coincidence.

“We both cried and knew it was God,” Lazenby said. “Debbie came in with a benefactor and money, and we have been rolling ever since.”

Together, Daigle and Lazenby gathered support for a community garden on the site of a burned-down elementary school. In just over one year’s time, the community garden has blossomed into something much bigger than fresh vegetables. Through an ecumenical network of city churches, the community is using the garden and adjacent office space to host events for children that include tutoring, nutrition classes, animal education, and anything else community volunteers have the gifts to offer.

The surrounding neighborhood features a variety of income levels, but just north stands a series of old mobile homes and trailers, some held together by duct tape. These are home to many of the students served by the outreach ministry of Daigle and her partners. According to Daigle, more than half of the students who attend gardening days and tutoring have a parent or relative in prison. Huntsville, the unofficial state prison capital, is just 30 miles south, on Interstate 45.

In March, Restoration Community Gardens held their spring planting, inviting all members of the community to help sow seeds for the next season. Despite the cold and wind, kids and adults arrived to take part in the festivities, which included a petting zoo, arts and crafts, cakewalk, hot dog lunch and, of course, playing in the dirt. People of all religions, races, social status and ages braved the biting wind to reach out with one another and work together.

“It isn’t just about a garden,” Daigle said. “This is about changing the complexion of a community. You can’t just look at what you produce out of the ground, but what’s the ‘fruit’ of this?”

Daigle believes that something about pulling food out of the ground has a profound impact on the students. They are endlessly surprised to find treasures beneath the surface.

“They said, ‘Oh my gosh! Look what’s in the ground.’ Then they dug up all the potatoes and gave them all away,” Daigle explained. “They got to keep a few, but we went door-to-door giving potatoes away. That’s really what the Gospel is about.”

Luke Blount is a staff writer and communications specialist in the Diocese of Texas. This article was originally published in the June 2013 issue of DioLog, the magazine of the Episcopal Diocese of Texas. It is reprinted with permission. 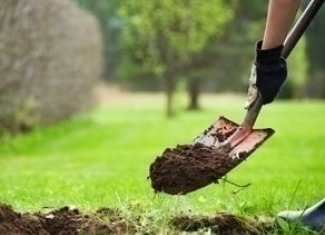