Heading Out Into Mission

Out is where mission happens at Southside Abbey. A mission of the Episcopal Diocese of East Tennessee, we sprung from a felt need articulated by a small group in Chattanooga, who knew we wanted to live into our faith in a different way. Central to our mission is our belief that as Christians we don’t go to save people, but rather we go to be saved. As Saint Paul writes in his Second Letter to the Corinthians, “For you know the generous act of our Lord Jesus Christ, that though he was rich, yet for your sakes he became poor, so that by his poverty you might become rich” (II Cor. 8:9).

Early conversations made clear the need to encounter people where they are and do the work of listening, which involves not talking and not trying to solve anything. This is tough for people and takes practice. Most of the time it cannot happen at the place where a worshiping community regularly worships, but must happen in the communities we are called to serve. For Southside Abbey, we found ourselves called to Chattanooga’s Southside neighborhood. And, as this video shows, we not only found a place to worship in a community art gallery, we began to gather around a common table, sharing a meal as well as the body and blood of Christ.

From the beginning, we knew there were certain principles that would guide this work:

Letting the Holy Spirit Guide Us
Think about all that takes place throughout the church year. Ordinary Time becomes the watchfulness of Advent. Incarnation is realized in Epiphany. Lenten fasts are broken by Easter joy. The Great Fifty Days culminate in the gift of the Holy Spirit at Pentecost, until once again, time becomes ordinary.

At Southside Abbey, the rhythm of the liturgical year guides our work. How many parishes participate in Jesus' command to wash one another's feet at Maundy Thursday? Southside Abbey decided to play with this command a little bit, following a conversation with our neighborhood school. The Family Partnership Specialist at the school suggested that Southside Abbey might begin a shoe closet for some of the kids at the school. When we were able to look forward at the liturgical year and frame this in light of Maundy Thursday and Jesus' command to care for feet, it really took off in a way that it might not have had we simply embarked on an ordinary shoe drive.

This process begins with having holy conversations and listening for what the Holy Spirit is already doing in the community and then getting on board. Bo Armstrong, a friar in the Brotherhood of Saint Gregory, leads the charge in this respect. He often uses words like, “nimble,” or, “integrated,” to describe Southside Abbey's missional direction. We are able to listen, hear, and respond quickly.

Reimaging the Church
Whenever the Church begins a new project – after banishing the initial “we can't” attitude – primary questions surround the issue of content, for the most part leaving questions of structure relatively unspoken. Southside Abbey decided – at the behest of empowered layperson and young person, Lisa Leopold – to flip the dynamic of content and structure on its head.

After determining that we really couldn’t improve on the biblical message of Jesus or the sacred meal he left us, we decided to leave content pretty much alone and address structure first.

Rather than drafting a budget that pays for the ministries of building, overhead, administration, insurance, and personnel first and spends whatever is left on mission, mission became our budget.

Bob Leopold's compensation is paid (for the next 22 months) by the Diocese of East Tennessee. Everything else is mission. When our governing council meets, we meet over a missional project (for example, our last meeting we stuffed fifty Southside Abbey tote-bags full of nonperishables to share with those who ask for food). It is never “just” a meeting. The question we constantly ask is, “How is what we are spending money on doing the work of Jesus?” If a project doesn't pass that litmus test, it doesn't happen. So rather than raise money and then decide the mission work that we want to do with whatever funds remain, we decide what mission work we feel called to do and then we set about figuring out how the Holy Spirit will help us pay for it.

Mission as Reflection of Goals
In that we worship in public places (with a meal) and do mission work tied to the seasons of the Church Year (again often around food), Southside Abbey attempts to view worship as mission and mission as worship, in a way that parishioner Ben Thomas calls, “seamless.” “Guerrilla Liturgy” and “relying on the hospitality of our neighbors” are both mission. In this sense, we are not here to “help.” This is not a one-way exchange. We get something out of this. We do mission to ourselves be transformed into the likeness of Christ Jesus, not the other way around.

The primary impact of Southside Abbey is in the lifting up of hope where hope has been obscured. This is done by helping people recognize that their voice matters, but also in showing Church people that what we do matters and is real: This is a two-way street.

We talk a lot about joy on tap. When we do something like our birthday party or an Oktoberfest with the ELCA Lutherans at the Country Hearth, we get to experience that joy in the lives of others and in our experiences, and we are changed by it: our prayer is that others are too. The Jubilee Year is a way that will respond to the felt needs of the community, rather than our perceived needs. Essentially, in the Southside Jubilee Fund, Southside Abbey is raising a bunch of capital to fund community projects that are brought to us by the community feeling those needs. It should not be such a radical idea – that a worshiping community would raise money to give it away – but that is how people are reacting, in all the best ways.

Relationships
Relationships are tougher to share in a way that is not exploitative. What can be said is that relationships always bear some kind of fruit, no matter how garbled the transmission.

As a community gathering, the Holy Spirit reigns and this amazing organic webbing of relationships begin to take place. People with innate passions for the least of these enter into relationships with refugees and asylum seekers that challenge their spirituality and way of life.

A struggling single mom meets a struggling married mom and they exchange stories and offer support for another through their differences and similarities. Southside Abbey has become this place where people experience the love of Jesus by simply giving it away. “It is through this unintentional, yet Spirit-driven, method that leaders have naturally risen up through the building of relationships with people who resonate most with them, their desires, and their gifts,” says Anna Thomas. “Reciprocity of relationship is key to Southside Abbey’s model.”

Early on, Southside Abbey worked with a family of immigrants from Iraq (who have since moved). In the beginning going to their house and trying to communicate using only the forty or so words we had in common was difficult. What we thought was a request for diapers, turned out to be a request to paint their apartment. We eventually got it right, but not before we delivered a bunch of diapers. What must they have thought? Who are these people with the diapers? Can't they understand we need our room painted? The Holy Spirit worked through our attempts at that relationship. Now is the time for the Church to be trying things. So what if they don't work out like we had hoped? We know the story, right? Resurrection means that we actually can't lose.

Shared Leadership
Southside Abbey is about the decentralization of leadership. Anything a layperson can do, a layperson does. This means the clergy person must let go of a lot, particularly the illusion that he or she is in control. This is not the Bob Leopold show. If we are doing our job, this is the Holy Spirit show – which is always fresh, always new.

Central to our leadership are people well versed in the art of facilitation, a great strength. Anna Thomas shares, “Southside Abbey’s ability to lead through empowering every member to be God’s version of themselves is something I’d always hoped for but had never encountered.”

This is a different level of buy in to mission than is often seen: one that leads new places. The laity – with the Holy Spirit – dreamed up the new 700 Club, the Southside Jubilee Fund, an attempt to raise $700,000 to give away in our community in 2014, based upon the biblical principles of Jubilee.

Deepening of Faith
Southside Abbey has some real diversity – people who are homeless and immigrants, and also those well established in Chattanooga. When people of such a diverse collection gather around a table to be fed spiritually and physically, things happen – walls come down. Perhaps the biggest deepening of faith has occurred in our partnerships with those in more traditional parishes. Spencer Cantrell writes, “It's kind of awesome how we've seen a lot of vitalizing and re-vitalizing energy spring up within a lot of the existing churches. The partnerships with the [ELCA] Lutherans is the obvious example, as well as having people worship with us who are also part of other parish churches, which has strengthened relationships even between the Episcopal churches in the metro area . . . Turns out new models might help support the good work of the older ones, too.”


Bob Leopold is missioner for the Diocese of East Tennessee, where he serves Southside Abbey in the diverse Southside neighborhood of Chattanooga. Southside Abbey is a non-traditional model of worshiping community that engages in justice ministries and gathers for a meal and worship on Friday evenings beginning at 6:11pm in a not-for-profit art gallery. If you would like to chat with him about anything, please feel free to email him at bob@southsideabbey.org.

Bob would like to recognize Southside Abbey members Bo Armstrong, Spencer Cantrell, Nik Forti, Lisa Leopold, and Anna and Ben Thomas who all contributed to this article. 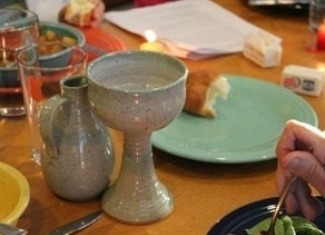