“How does a congregation live into its sacred role as a healer?"

That’s the question congregational leaders at St. Luke’s/ San Lucas Episcopal Church in Chelsea, Massachusetts use to guide their ministry. Recently honored by their city for all they do to “advance the cause of Chelsea and its people,” this small church, in a densely populated and economically challenged city, is realizing their mission of living the love of Christ in worship, fellowship, hospitality and service to the community.

From serving as host of the recent ecumenical service of healing in response to the shootings in Charleston, South Carolina to their long running commitment to addressing hunger in their community, the people of St. Luke’s practice a ministry of healing, modeled by both their patron saint, St. Luke, and Jesus.

Central to this ministry is the recognition of the importance of a strong lay and clergy leadership team. “It takes more than a charismatic priest with good ideas,” says St. Luke’s priest Edgar Gutierrez-Duarte. “You also need a good relationship with a strong vestry; working as a team, with constant conversation and a willingness to compromise.”

What are we called to do?

When he arrived at St. Luke’s in 2007, Gutierrez-Duarte found a small mission church that was broken, both financially and spiritually. They’d had 10 difficult years and their initial focus was on survival. He discovered that the church wasn’t particularly relevant to the wider community. Its outreach appeared limited to offering rent-free space to community groups – one of which ran a soup kitchen.

One of the first questions the vestry and Gutierrez-Duarte considered addressed what would become the congregation’s mission statement: How might St. Luke’s live in the love of Christ in worship, fellowship, hospitality, and service to the community?

“While offering great worship was important, we knew we needed to be more; we wanted to be relevant in the community, to contribute something,” said Gutierrez-Duarte. “I asked about needs. Chelsea has a large Latino/Hispanic population. We considered offering English as a Second Language (ESL) classes, and also talked about what else we might do, how we might be a positive agent for change. During our conversations, I learned that my predecessor had operated an informal food pantry, offering nonperishable food he kept in a small closet to people who were hungry.”

The vestry and congregation decided to take on hunger in their community. At first, the Saturday morning pantry served about 10 families. As the recession deepened, 10 turned to 20, which then grew to over a hundred families. The pantry moved from the closet to a small room. “The congregation was spending approximately $4,000 a year from their limited budget. I didn’t know much about food pantries and didn’t know I could get help from the Greater Boston Food Bank,” recalls Gutierrez-Duarte.

As the food pantry was growing, the vestry took a look at the soup kitchen operated by a community group in the St. Luke’s church hall and kitchen. Over the years there had been friction between the group and the congregation; perhaps it was time for the congregation to take this ministry on as an extension of both the food pantry and its commitment to the community.

At the same time, people who used the food pantry and soup kitchen were asking St. Luke’s how they might give back to the church. Perhaps St. Luke’s would consider starting a thrift shop, where they could donate used items for resale? The money could then be used for the food pantry.

Who can we call on for help?

As St. Luke’s was becoming a healthier worshipping community while also living into its commitment to share God’s gifts with the local community, the leadership team recognized they were running the risk of taking on too much. Gutierrez-Duarte and the vestry began to explore options. They learned about – and began working with – area organizations that offered free and lower cost food to area food pantries. They welcomed community members as volunteers in the food pantry and thrift shop. And, they decided to invite other Episcopal churches in their deanery to consider partnering with St. Luke’s by sending volunteers to help cook and serve free community meals on Saturday morning.

The leadership team knew that some of the suburban parishes in the Mystic Valley deanery might harbor some fear about coming to Chelsea. They took care in their presentation to name this concern as they shared stories related to the impact of their programs on the families who used the food pantry, thrift shop, and soup kitchen. They also shared stories of witness to God’s presence in these ministries. The result? Four congregations signed up – each taking one Saturday a month to cook and prepare the food provided by St. Luke’s. These churches also support St. Luke’s with donations to the thrift shop.

The vestry, exercising their fiduciary oversight of this growing ministry, hired a food pantry coordinator to manage the program while the senior warden took on the role of coordinator of the kitchen partnership. They also established a fund for these outreach ministries, distinct from the funds for worship and programs.

A thriving congregation and…

While St. Luke’s outreach and worship life were thriving, the buildings were failing. Roofs leaked. The basement was damp and moldy, and the hot water iffy. On Saturdays, the building was packed with over 250 people – plus volunteers – coming to St. Luke’s for the food pantry, community meal, and thrift shop. The vestry was faced with the challenge of making their limited and aging space more functional, cost-effective, and welcoming.

In 2011, they applied to the diocese for – and received – a Stokes loan to repair the church roof and to switch from oil to gas heat for the church compound. Once this work was complete, they asked for a second Stokes loan to address additional problems including removing the leaking oil tank left in our basement, repairs to the roofs of the other church buildings, and eliminating the mold problem in the basement.

Soon after receiving this request, then bishop Tom Shaw summoned Gutierrez-Duarte to a meeting. "That was a dark day," the vicar recalled. Given the state of the church buildings, the bishop recommended selling the aging buildings and moving to a different location in the city to better meet the needs of our congregation.

Gutierrez-Duarte made a case for not moving the church's operations, stating, “we might as well close, because moving would be so traumatic for the congregation and our program users that we would lose most of them, among other considerations.” Finding another location in the city with similar access to public transportation would be difficult and costly. The church’s food ministries had good support from other churches in the Mystic Valley Deanery. Then, the conversation took a surprising turn. "Tom, in his particular way, looked at me and said, 'Edgar, what would you do if you had a million dollars?' He asked for a proposal, and that's where things began."

A real estate advisory firm was brought in to take a look at St. Luke's buildings and programs. After considering several options, the firm recommended building a small two-story addition in a 500-square-foot gap between the church and its attached two-story school building. This would provide consolidated, modernized food storage for the food ministries, which would now be grouped together on the lower level, and more space upstairs for offices, classrooms, and bathrooms.

Reconfiguring the existing space would improve flow and create efficiencies. The plan would also upgrade roofing and necessary building systems, add handicapped accessibility to all levels of the buildings, and solve the water problem in the basement so it could be reclaimed as a dry and spacious home for the thrift shop.

"In his wisdom, Bishop Shaw in September of 2012 brought the Diocesan Council to St. Luke's for its meeting, on a Saturday, our busiest day!" Gutierrez-Duarte recalled. "They had to make their way through all this activity, so they really got the full picture of what we were trying to do, but also what we were up against with our buildings.“

The council approved the construction project proposal that day, and in March 2013 approved the $1.2-million budget, to be funded from proceeds from the sale of closed churches. Work began in April 2014.

"This is a church in a changing community," said Steve Pierce, the congregational coordinator on the diocesan staff who works with churches that are closing and on other property projects.

"From a diocesan perspective, one of the purposes of the closed church proceeds is to build up ministry and mission. This project represents a major investment by the Episcopal Church in the city of Chelsea. Chelsea is not the only place where such an investment could make an impact, but it was clearly a compelling one. Here we have this formerly Anglo church nestled in a city that is becoming more and more Hispanic and which has been through incredible economic challenges," Pierce said.

It was important to the church – and the community - to keep the food and thrift shop ministries open during construction. During the seven months of construction, only the thrift shop had to temporarily close. The food pantry continued to operate--with volunteers sorting and distributing 3,000 pounds of food a week from the pews of the church's sanctuary--as did the community meal program, though it has had to simplify its offerings to sandwiches and, during the summer, outdoor barbecues.

The renovated church is more inviting – both aesthetically and practically. There are handicap accessible entrances, opening the sanctuary and the rest of the building to people for whom stairs limit access. Everyone entering the church and its buildings enters space that is clean and beautiful.

Gutierrez-Duarte and the vestry are working with a team of diocesan congregational development staff members and consultants to work on a strategic plan that includes building up both leadership capacity and financial stability – challenges that face many congregations, perhaps more so for a small congregation serving lower income people.

“People in this congregation give a lot, given their financial resources,” said Gutierrez-Duarte. “Our partner churches are also generous.

"It is certainly our hope, and we are working with the team from the diocese, to take advantage of the curiosity that there is in the community about our project, and its attractiveness, to bring in new people and involve them. We have big plans."

In the Vestry Resource Guide, these questions are offered to help vestries think strategically: 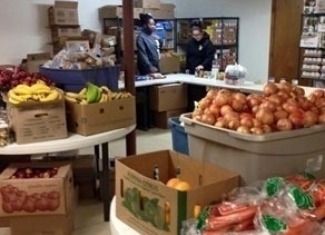