For the past four years I have been volunteering two days a month at the Worcester County House of Correction (WHOC) in West Boylston, Massachusetts, providing spiritual direction, liturgy, Bible study, and book studies to the men incarcerated there in a program called STOP (Substance Treatment Opportunities Program). All of these men are in recovery from substance abuse, incarcerated for crimes committed largely as a result of their addiction.

After a period of time, it became clear to me one of the major problems for these men was what comes next. After participating in STOP’s six to nine month intensive rehab program, there were few choices available regarding where they would live after release. If they went to an environment that was not healthy or safe, they were much more likely to relapse. These men need a transitional housing opportunity to help them move more easily and safely into society from the world of incarceration.

In September 2014, the WHOC Director of Substance Abuse Services and STOP program creator, Peter Kosciusko (who is also a parishioner in my parish) and I were lamenting the poor housing options available for the men in STOP. Suddenly I recognized how our parish might help with this dilemma. For the past eight years, I’ve served as rector at the Church of the Reconciliation in Webster, Massachusetts and never lived in the rectory. My husband and I own our own home, so the rectory provided additional office and meeting space. Our congregation is also blessed to have a two-story parish hall with two large rooms. If we moved the existing office/meeting space into the underused upper parish hall, we could convert the former rectory to a sober house (we could take six men). Four separate rooms could be created out of the large upstairs hall, leaving the large open room downstairs for gatherings.

While Peter and I felt called by God to take on this new ministry, it was unclear if doing so was possible. We are a small parish with an average Sunday attendance of 50, and though we have a fairly healthy amount of invested funds, our annual budget is extremely tight. We also had no idea how our parishioners would react to the idea of converting our rectory into a sober house, nor did we know what lay ahead in terms of getting town approval.

Initially, Peter and I shared this idea only with the vestry. They felt this type of ministry fit well with our mission and vision. For the past eight years, our focus has been outward into the community. Webster is a former mill town in Massachusetts’ Blackstone Valley, and its residents are primarily mid- to low-income. We have tried hard to minister to the needs of the people in town with very good success. We’ve earned a reputation as “the little church that helps people.”

The leadership team decided to start with feasibility study. Ed Farrell, a fellow Episcopalian with experience in process work, was hired to look into all of the aspects of using the former rectory as a sober house. Over a nine-month period he gathered information, meeting twice with the vestry to share findings. It became obvious that, although fundraising was the key obstacle, there was really nothing major blocking our way to starting this ministry.

On June 7, 2015, Ed facilitated a parish wide meeting and shared his findings. The vestry and I fielded questions and concerns. Many questions were asked. Four people expressed concerns related to fear of having previously incarcerated individuals in recovery living so close to the church and parish hall. Of interest was the fact that other parishioners attempted to quell those fears so that this role did not only fall to the vestry and me. We explained the vestry would vote in September whether to go ahead with the plans, and that parishioners should use the summer to continue to ask questions and receive information from the vestry and me. Over the summer, only one or two additional questions were raised. We also offered a Skype session with a lay leader from a Congregational Church outside of Boston with a similar ministry with formerly incarcerated women. Several parishioners attended the session; it had a positive effect overall.

On September 16, 2015, the vestry voted to go forward with the sober house ministry. The vote was ten in favor, none opposed, and one abstention. Reconciliation House was born!

Our first order of business was to hire an attorney to help us separately incorporate the sober house as a 501c3 (nonprofit, religious organization). The attorney prepared a “to do” list for us so we understood what we needed to accomplish in terms of the incorporation, tax exemption from the Federal and State governments, selection of a board of directors, certification as a charitable organization so that we could do fundraising, etc. From October to February we worked on all of these things. We were blessed to have the help of our State Representative Joseph McKenna, as well as the Sheriff of Worcester County, Lewis Evangelidis. They talked with town officials to help us to determine what was needed to be in compliance with Town ordinances. We also began to build our board of directors. God blessed us with nine competent and dedicated individuals from our community including the First Justice of the Dudley District Court, Timothy Bibaud; Robert Keith, COO of Webster First Federal Credit Union (now treasurer of the Board); several business owners; Peter Kosciusko, representing the WCHOC; Mark Rogers, our executive director (and senior warden of the parish); and me as president of the Board.

We were officially incorporated at the end of February. On March 10, 2016 we opened our first bank account with $1,200 representing early donations.

The Board’s initial responsibility was to plan our first fundraising event. On May 5, 2016 we held a $100-a-plate dinner at a restaurant in Webster; 105 people attended. Several notables spoke at the dinner, including two young men in recovery and recently released from the STOP program. Their testimony was riveting and emotional. At the end of the dinner, our executive director made the “second ask,” meaning, the request for additional funds. Pledge cards were on each table. Several individuals and corporate representatives turned in their cards that night, others mailed in their donations.

We also wrote two grant proposals. Our diocese, Western Massachusetts, had just created new ministry development initiatives: one-time start up grants. We asked for, and received a $10,000 grant. We also received a $14,300 grant from the Janet Malser Humanities Trust, a local trust that provides funding to projects in Webster and two other towns.

These efforts left us feeling much more comfortable about meeting the two budgets we’d created: one represented our start-up costs, and the other represented our ongoing budget once the house was up and running. Residents would pay $125 per week to live here, but that would not meet all of our expenses—particularly if we did not fill the House immediately. We knew that we would always need to do fundraising. And we felt we needed a financial cushion. I approached the Community Investment Committee of our Diocesan Board of Trustees (of which I am a member) to ask if Reconciliation House, Inc. (RHI) might be allowed to apply for a loan (the Trustees must invest a portion of Diocesan holdings via low interest loans to nonprofit organizations). Without any hesitation, RHI was granted a $65,000 unsecured loan for three years at four percent interest! Another gift from God!

Renovations, certification, and preparations for opening

Hiring a contractor to do the renovations needed in the rectory and parish hall was the next major agenda item for our board. It didn’t take long to find a qualified contractor, and renovations began June 1, 2016. We soon learned the town fire code required an alarm system that rings at the fire station; an expense we hadn’t budgeted for. The system is expensive--$9,000 for labor and materials. We felt the sting of the additional expense, but we were determined not to let it stop our progress. We will continue to raise funds to help offset this expense.

Earlier this year, the Massachusetts Department of Public Health (DPH) had issued a policy statement that sober houses may seek certification by the Commonwealth. Certification would mean that the sober house complied with very specific standards. DPH made it clear that noncertified sober houses would be ineligible to receive resident referrals from state departments. We knew we wanted to have DPH certification. Three other board members and I attended mandatory two-day certification training in June. Once the renovation is finished, and all of our policies and procedures have been written, we will be inspected and, hopefully, certified.

This month we are interviewing candidates for the live–in house manager position. The house manager is someone with long-term recovery skills who will live at the House and provide ongoing support and direction to the residents.

Our hope is to have the renovations complete and our certification inspection done by the end of August 2016. Residents will be allowed to move in immediately thereafter. While our capacity is six men for up to six to nine months, it is expected that we won’t have a full house until later in the fall.

A Grand Opening liturgy and celebration is planned for late September.

Over the past two years we have learned many things with regard to this project. These are the key items we wish to share with other clergy and vestries:

We will know soon enough the impact that Reconciliation House will have in the lives of the men who will live here. We continue to pray that God will lead and guide us in our effort to do God’s work in the world, in accordance with God’s will.

Janice Ford is rector at The Church of the Reconciliation in Webster, Massachusetts. For the past four years she has volunteered two days a month at the Worcester County House of Correction in West Boylston, Massachusetts to provide spiritual direction, liturgy, Bible study and book studies to the men incarcerated there in a program called STOP (Substance Treatment Opportunities Program).

When Janice Ford and Peter Kosciusko got excited about the possibility of bringing a sober house to Church of the Reconciliation, they first brought their idea to the vestry. The vestry evaluated this idea using the framework of their mission and vision statement that, in part, says:

“We are a faith community of all ages and all walks of life that comes together to spread the Gospel by word and example, and to provide support and encouragement to those inside and outside our walls. We are dedicated to mission and outreach in our town, our nation, and our world.”

The decision to take the first step of conducting a feasibility study was made easier for this vestry because of their deep commitment to their mission.

Does your congregation have mission and/or vision statements?

Are they used to guide your work as congregational leaders? Are they practiced/model by members?

When was the last time your mission and/or vision statements were reviewed? 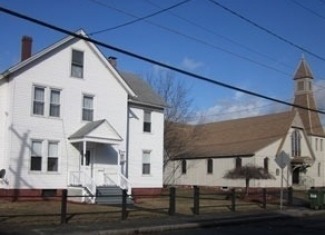