Editor’s note: What is good stewardship around educating our next generation of clergy? In this article, commissioned as part of ECF’s Lilly Endowment initiative, “From Economic Challenges to Transformational Opportunities,” Gary Shilling, economist and chair of the board of Episcopal Preaching Foundation, invites us to consider changes in the way our Church identifies, recruits, trains, and financially supports, the next generation of Episcopal clergy, the women and men who will guide seekers and followers into deeper relationship with Christ.

A successful team is invariably led by an excellent coach. So are Episcopal parishes.

Polls show that Americans are increasingly spiritual, but organized religion, especially mainline Protestant denominations, continues to atrophy. Strong clergy leadership is needed to direct the seriously spiritual into Church, to their benefit as well as to fulfill our mission. As Christ said in Matthew, “The harvest is plentiful, but the laborers are few. Ask the Lord of the harvest, therefore, to send out workers into His harvest.”

We desperately need to identify, recruit, train and financially support a new generation of topflight parish priests. To this end, I propose a six-step program.

1. Right-size Episcopal seminaries and rationalize their areas of concentration. At present, we have too many seminaries for the current and likely pool of qualified seminarians. A seminary is a graduate school, and is probably not economically viable with less than 100 full-time-equivalent students, considering the administrative, faculty, physical facilities and other costs. Also, to be a first-class graduate school, it must be strong enough to turn away well-qualified applicants.

Under the current business model, weak seminaries run their financial resources down to zero and then close their doors. That’s simply bad stewardship. Taking into account Episcopal seminarians at non-Episcopal seminaries, probably three or four Episcopal seminaries are needed. Some should be oriented toward full-time residential master of divinity and other degree programs while others concentrate on part-time, online and other formats.

Since going out of business is painful as is losing identity in a merger, it will take considerable effort to effect the needed consolidation. No doubt, the vigorous leadership of the Church, including the Presiding Bishop, will be necessary.

2. Once Episcopal seminaries are consolidated to a sustainable number, they need to be made financially viable. This will involve meaningful endowments and ongoing contributions that will come from foundations and financially able lay people. Seminary graduates may be loyal but, unlike many college alumni, they generally are not able to provide significant donations.

Adequate funding is necessary not only to finance seminary activities, but also to keep time and energy riveted on their basic missions and not distracted by financial survival.

3. Actively recruit topflight candidates as future parish priests. Consider the Wall Street model, which identifies outstanding prospects early in their college years and then cultivates them with summer internships, orientation programs, etc. Clergy and laity need to find prospects with the ability and interest in becoming outstanding priests, accompany them on visits to seminaries, coach them, etc.

The current model relies too heavily not on active recruiting, but on passive acceptance of interested prospects, and often results in less-than-ideal candidates. Also, adequate scholarships and other money must eliminate any financial constraints on seminary attendance. God may tap prospects on the shoulder, but they no doubt can feel that tap more easily if they don’t worry about finally repaying their student loans only when their children enter college and they incur new indebtedness.

4. Provide a first-class seminary education, whether residential or in mixed forms. In recent years, online courses, part-time programs and other forms have been explored, but sometimes out of financial necessity. Adequate money will allow concentration on modes that are geared to contemporary lifestyles, family responsibilities, etc.

5. Prepare ordination-track students, beyond academic studies, for parish work. Earlier, new graduates served as curates under experienced rectors before assuming overall parish responsibility. Now many become rectors or priests-in-charge directly, sometimes covering more than one congregation. So they need to be prepared to run parishes, which really are small businesses, before moving to the field.

6. Provide guidance and necessary financial support for preachers in their initial years of ministry. Topflight people will be more attracted to parish work if they know they will be supported early on.

For parishes that lack financial and other resources but can become viable with superior clergy leadership, the venture capital model is attractive. Mentoring by senior clergy from other parishes and salary seed money supplements would be provided for three-to-five years with the understanding that during that time, the priests will develop self-sustaining parishes.

Obviously, this six-step process requires considerable commitment and money from dedicated Episcopal lay people as well as Bishops and other senior clergy. I believe, however, that a well-defined program will attract the necessary leadership and funding.

A. Gary Shilling is an economic consultant and columnist for Forbes Magazine, Bloomberg Viewand other publications. He is a consummate Episcopal lay leader and an enthusiastic and generous supporter of The General Theological Seminary, where he was earlier treasurer and a member of the Board of Trustees. Thirty years ago he founded and still chairs the board of the Episcopal Preaching Foundation (EPF) which partners with Episcopal dioceses to plan, staff, and conduct preaching conferences for priests, deacons, and lay preachers at the diocesan and national levels. EPF also sponsors the annual Preaching Excellence Program (PEP) for 50-60 seminarians each year from Episcopal seminaries and other institutions preparing students for Episcopal ordination. They spend an all-expense-paid week honing their preaching skills and are led by four or five homiletics professors, an equal number of skilled parish preachers, a faculty dean, and well-known guest lecturers. 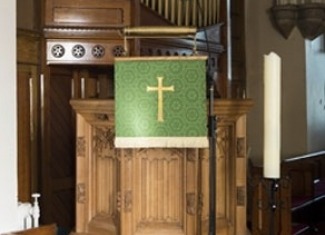