Who would disagree that authentic, honest talk about money is one of the very toughest things a vestry has to do?

It is especially hard because many people feel that they are not qualified to speak about money. Most of us reasonably assign the money roles to those who are experienced in measuring it.

Every time we construct a budget, we ask our community for something; even if those who are not involved don’t get to vote on it. How then, do we communicate in a way that allows people believe what we are saying? How do we explain that the hard choices we have made — to maintain one program at the expense of another, to defer badly needed repairs, to lay-off staff, or even to run a deficit — have been made after much debate and prayer and in good faith? Will the community support us?

The first thing we need to be sure of is that we have actually done all of those hard things we think we have done. In other words, to be believed we must believe it ourselves.

Some time ago, our vestry went through a discernment process exploring who we were and who we wanted to be. This followed a period when recession, clergy turnover, interim ministry, less than crystal clear accounting, deficits and staff layoffs led to real pain and distrust in the parish. To help heal, a vestry pledge had been made to balance the books every year come what may. There would be no surprises. That promise was kept. After six or seven years of stability, we sensed that trust had been restored. Now it was time to dream a little. Things felt good in the parish. We were ready for the next level.

Under the leadership of three very capable senior wardens over two years, dream we did: What does our parish look like if we glorify God in a way commensurate with our underlying resources? Moreover, what if we went beyond the basics and were able to raise whatever funds we needed? We took our time; there was real depth and enthusiasm as we costed our dreams.

By and by stewardship season arrived. The senior warden asked all vestry members to significantly increase their own pledges in order to lead the parish in this fresh beginning. Our vestry goal was an increase of 33% over a couple of years.

As I remember it, pledges from the vestry went up a paltry 2%.

The rector and I started asking each other questions. What was it we didn’t know about ourselves? Our tradition was to find our treasurer, stewardship, and finance committee chairs from among the bankers and investment managers in our community. They had, over the years, done a great job of ensuring that we stayed within our limits. But, we asked ourselves, what do our budget discussions feel like? Not particularly good. We know what is said, but what is the relational tone? Maybe the non-financial people running programs were intimidated?

Not trusting the budget

We developed a hunch that there wasn’t a collective understanding of the budget we already had. Not trusting the budget, the vestry was not equipped to field questions from the parish about it.

Rarely were there any serious financial questions at vestry meetings and when there were, the answers were always succinct and self-confident. Successive treasurers wanted to hustle through the routine; other members did not want to look stupid. The unreflective style of us financial types – yes, me too – closed the conversation. We were stuck without being aware that we were stuck.

We pushed and pried in private with some vestry members. What were their real attitudes toward “the numbers”? We learned that there was a widespread assumption of there being a lot of slack in the budget, but that it was going to some program other than their own.

Aware of the issue at hand, the rector and I then decided to restructure the usual vestry format. We scheduled a series of non-mandatory meetings over the summer to thoroughly shine light on the entire budget. A lot of work went into these; no question was too small, and frankly, no question was too dumb. Since it put the responsibility and the opportunity on each of us personally, every vestry member came to every meeting. We had a lot of fun. When we were finished, we had an absolutely solid foundational budget, and we proved what we had been saying all along. There was no slack at all in the budget, only now every vestry member knew that for certain. Our treasurer was vindicated. He now knew how to talk to the community and had their support.

Maybe best of all, we eliminated a lot of tangential conversation that was really about money, but we hadn’t come right out and say so. And the vestry’s own pledges went up — from 2% to 36%!

Authenticity flows from knowledge and belief. It creates genuine movement and unsticks the stuck. We should always question our assumptions to be sure to learn what we don’t know. And like all true knowledge, we come by it personally, firsthand. Don’t we owe that to ourselves and to the communities we lead?

An older version of this article was published in Vestry Papers in 2003, and can be found here. 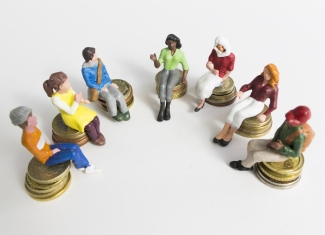