“They devoted themselves to the apostles’ teaching and fellowship, to the breaking of bread and the prayers. . . All who believed were together and had all things in common; they would sell their possessions and goods and distribute the proceeds to all, as any had need. . . they broke bread at home and ate their food with glad and generous hearts, praising God and having the goodwill of all the people. And day by day the Lord added to their number those who were being saved.” Acts 2:42-47 [1]

The Rule of Saint Benedict

The early Church did not act out of scarcity, but abundance – the abundance of the Lord’s presence, and of one another. The essence of the monastic movement was an attempt to recover the spirit of the early Church. Thus, when Benedict talks about stewardship in the Rule, what he’s looking to do is recreate what is described in those five verses of Acts 2. What we see there is a community that has worked out what its mutual relations are going to be. They have learned how they are going to be about the business of caring and being cared for.

We know little about Benedict himself, apart from his traditional dates of birth and death, 480-543, and that there is a section in THE DIALOGUES of Pope St. Gregory the Great devoted to Benedict’s life and miracles. Benedict’s most important contribution, his Rule, was composed sometime in the mid-sixth century, and is a relatively brief document, consisting of a prologue and 73 short chapters describing the nature, content, and duties of monastic life. It has served as the guidepost for western monasticism, and, indeed, as a foundation for the development of modern western civilization, which was influenced by Benedictine monasticism and its offshoots. The Rule, almost 75% scripture quotations, offers much to those who take the time to dialogue with it. Additionally, the Church of England, the spiritual ancestor of the Episcopal Church, was largely formed by Benedictine monasticism, particularly liturgically and spiritually. So, taking some time to consider stewardship from this point of view might bear fruit.

At the core of Benedict’s understanding of stewardship is the care of persons. Whether it be the abbot (the head of the community) or the cellarer (the one in charge of the goods and services), the first order of business is how people are treated. This is an important lesson for us as we think about stewardship today. So often we think of it in terms of “time, talent, treasure,”, which isall well and good, but what we really think about is – money. If we think first of the gift of the people in our care, remembering our accountability before God for them [2] (see the RB chapters on the abbot 2 and the cellarer 31) it can make a difference in how we go about planning, and accomplishing the real stewardship we have. Benedict makes special mention of the sick, children, guests, the aged and the poor on several occasions, as do the scriptures, and this should remind us just how much these people make Christ present to us. As we go about our stewardship each year, how are we serving those Jesus called “the least” of his family, toward whom he holds special care? Stewardship, Benedict-style, goes beyond the budget, and into the heart of how we approach all aspects of life together.

Listening from the heart

Further, perhaps we should extend that mutual care along to mutual obedience, another term dear to Benedict’s heart. When he uses ‘obedience’ he’s talking about listening to one another deeply, like we listen to God, with “the ear of the heart.” It opens us to the community around us, which enables us to make a difference because we’ve really begun to listen to one another. Thus, Benedict’s mutual obedience opens us to the “good zeal” leading us to love God and our neighbor in the way Paul talks about in Romans 12, and Benedict describes in chapter 72. Aquinata Bockmann, OSB, offers this insight in her Perspectives on the Rule of St. Benedict:

Pursuing what suits me (or what I consider useful), seeking fulfillment of my inauthentic needs, leads into a vicious circle. With each fulfillment, desires increase and new ones keep arising. Benedict points in the opposite direction. It is in extending ourselves toward others that we also achieve true self-actualization, a happy life (Prologue 15). When we strive only for ourselves, we go astray; when we aim at the true benefit of the others, we attain happiness for ourselves. Here Benedict shows a concrete way of making the other, and ultimately Christ, the center of our own life. “Father John the Dwarf said: ‘A house is not built by beginning at the top and working down. You must begin with the foundations in order to reach the top.’ They said to him, ‘What does this saying mean?’ He said, ‘The foundation is our neighbor whom we must win, and that is the place to begin. For all the commandments of Christ depend on this one.” [3]

When we lay the foundation of care of persons, then we can move to the care of time, places, and things – the other aspect of stewardship, but which often takes most of our attention.

Benedict charges the cellarer to care for the utensils of the monastery as though they were “the vessels of the altar,” because nothing is negligible. Benedict takes very seriously God’s word at the end of each act of creation, “and it was good.” (Genesis 1:44ff). If God’s creation is good, and God has entered our world – taking flesh in Jesus Christ – then created reality takes on a whole new purpose, and so should our care of it. Time, places, and things all become the tools for the building up of the community; they are means to the end of life together.

Benedictine stewardship is about mutual care, about the right use of time, places, and things, and finding the holy in the ordinary…including money. Our stewardship should be about seeing abundance, not mourning scarcity.

The Very Rev’d Steven A. Peay, PhD is Research Professor of Homiletics at Nashotah House Theological Seminary in Nashotah, WI. History and historical perspectives have long fascinated Father Peay. His undergraduate study of Church History led him toward monastic life, which he entered at Saint Vincent Archabbey (Latrobe, PA) in 1977. Following his first profession of vows he studied for the priesthood and after final vows was ordained deacon in 1981 and priest in 1982. The studies he began in college and pursued in seminary continued following ordination. He returned to Saint Vincent to teach as Assistant Professor of Homiletics and Historical Theology. During his tenure at the seminary he was also engaged in parish work (including one year as a pastor), retreats for clergy, religious and laity, and served as the seminary’s academic dean for five years. Leaving monastic life in 1994, he then devoted himself to parish work for the next fifteen years in Congregational churches in Wisconsin (Madison and Wauwatosa), while continuing to research, write and teach in various venues. Peay came to Nashotah House as adjunct professor of Church History in 2008 and was elected to the faculty in 2010. His orders were received in August 2010 and he is now a priest of the Episcopal Diocese of Albany.

[1] Acts 2:42ff is recognized as the Scriptural basis for the Chicago-Lambeth Quadrilateral. 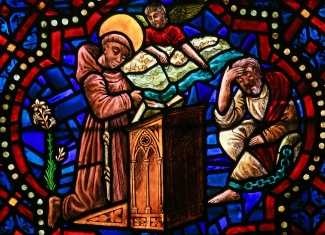