Often in ministry, I’m reminded of a scene from Roland Joffe’s 1986 film, The Mission. It comes early in the movie, contrasting Fr. Gabriel (played by Jeremy Irons), an 18th century Jesuit missionary, and Rodrigo Mendoza (Robert De Niro), whom we first meet as a slave trader. High atop the falls, the priest confronts the human trafficker:

Gabriel: So, you’re hunting above the falls now, Captain Mendoza. We’re building a mission here. We’re going to make Christians of these people.
Mendoza: If you have the time.

In spite of the beautiful scenery – the greatest few hours of pure cinematography I’ve ever seen – The Mission isn’t an easy film. Jesus’ good news, the film asserts, re-shapes human communities and gives them power. Jesus’ good news literally changes the world. At the same time, however, the world always asserts its own power. And power sets history. So, which power?

Building a mission in the 21st century

Far removed from 18th century geopolitics, I am an American priest serving a few remarkable communities of faith in a beautiful part of the country. The two Episcopal congregations I serve as rector benefit from core strengths and have many advantages, both internal and contextual. Life and ministry in this context is marked by opportunities.

Still, we know we’re not the same communities of faith that blossomed in the halcyon years of the Baby Boom. Most leaders in most Christian communities would say the same thing, but saying it doesn’t make it easier to deal with. Not a day goes by in ministry in which I don’t deal with it. Yesterday’s conversation was about lawn maintenance (turns out we don’t have as many volunteer gardeners as we once had). Tomorrow’s will be about another symptom. You pick.

That’s why it matters where you look. While the Episcopal Church’s numerical decline will surely continue, it’s beginning to abate and, more importantly, taking with it some of that institution-centered thinking. Nowadays, the questions my communities wonder about have less to do with sustainability – our talking points 8-10 years ago – and more to do with ministry, relationships, community, neighbors. As institutional capacity has diminished, an appetite for creativity has emerged. Experimentation is becoming a core value among dedicated leadership. Like Fr. Gabriel said, high atop the falls: “We are building a mission here.”

In part, that’s what makes stewardship season such a challenge. I don’t think it’s because we don’t like to do the work, even though a well-coordinated pledge campaign marked by hope and generosity is a lot of work. Nor do I think it’s that we have yet to find the perfect stewardship system. I’ve experimented plenty with pledge drives. For what it’s worth, I’ve come to believe that the customary approach is more than enough. Preach about generosity; have key leaders give talks on select Sundays; send solicitation and thank you letters; and ask for a targeted response – an increase in giving or a pledge card or both. That’s a great system. Use the amazing resources of The Episcopal Network for Stewardship. You don’t need to reinvent the wheel. There are so many more important things to pursue – ministries that change lives, missions shaped around human hopes, hurts and healings.

What makes stewardship season such a challenge is that it is, for many, a forced retreat into the old economy. The need to raise sufficient resources to fund the old business model is a distraction and an artificial choice. Choose, that is, between cultivating the new, fledgling mission work that’s emerging under your very feet or take care of what economist Richard Florida calls “the old Fordist order and the very way of life it had engendered.” Adding to that, this happens at the very time in the calendar year in which energy around re-connecting is high.

Consider these questions, then, as practical next steps – an invitation to uncover new ways that are already emerging in your Christian community.

The two congregations I serve did a remarkable thing. They allowed stewardship seasons in back-to-back years to tell them what’s no longer working. They learned that the old way of business no longer works. In the new preface to his 2012 revision of The Rise of the Creative Class, economist Richard Florida writes:

The old order has failed; attempts to bail it out, to breathe new life into it or to somehow prop it back up are doomed to history’s dustbin. A new global economic order is taking shape, but it is still conﬁned within the brittle carapace of the old, with all of the outmoded, wasteful, oil-dependent, sprawling, unsustainable ways of life that went along with it.

A new model for today

The two congregations I serve learned for themselves that it’s better to partner together because, in the end, there’s little that can be done to bail out the inherited 20th century business model. At the same time, they looked more deeply into the annual drill of pledge fundraising in an effort to understand present patterns and develop future invitations. They showed us that God has been laying a lot on the hearts of God’s people, but we’ve been so busy shoring up the institution that we haven’t taken the time to ask or invite them to talk about that. New ministries, new relationships, new invitations, new energy, new questions began to emerge, mostly because leadership stopped looking for old answers. Again, Richard Florida: “Still, that new order will not simply or automatically assert itself into existence. It will require new institutions, a new social compact, and a new way of life to bring it into being. We must turn our attention … to a shared and sustainable prosperity that lifts human well-being and happiness across the board.”

Gathering the energy to do another pledge drive might sound awfully daunting but, in fact, it is the precise moment to cultivate something new, to plant new networks of transformative ministry. No one has ever contended against the powers of evil by worshipping or hiding behind the statues of the old order. Instead, they “build missions here.”

Greg Syler is the rector of Ascension & St. George’s, two neighbor Episcopal congregations in St. Mary’s County, Maryland (Episcopal Diocese of Washington). While both churches remain separate and distinct parishes, they’ve uncovered profound economies of scale and cost savings and, most importantly, they share most ministries as well as core staff and leadership teams. Greg is married to Iman, who serves as the Episcopal Missioner for Discipleship & Faith Formation in southern Maryland. Together with their daughter, Carter, the Sylers enjoy cooking, reading, spending time with family and getting away for hikes in the North Carolina mountains. 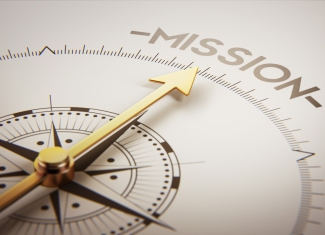