The Gift of Giving

For the past twenty-six years, I have been a member of Trinity Church in Los Angeles, California. Before that, in the 1980s, I was an accountant in the diocese of El Salvador for seven years. During that time, the Rev. Luis Serrano, other members of the Episcopal Church and I were incarcerated by the state authorities. They said that the Church was a terrorist entity because we had given preferential treatment to the poor. A group from the Episcopal Church Center, with the help of the Rev. Canon Robert Brooks, came to El Salvador and with their help we were released. Those were very tough times, and we continued to receive threats after our imprisonment. I left the Church and later, El Salvador.

After some time in New York, I went back to my country, but it was never the same. Shortly after returning to El Salvador, the threats resumed. I was also going through a divorce and I wasn’t well. My sister recommended that I go to my brother’s home in Los Angeles. When I arrived in California, I attended a church where a priest I knew worked. Because it was far from where I was living, he helped me find a closer church, and that is how I ended up at Trinity.

The Rev. Mac Thigpen, the rector of Trinity, didn’t speak Spanish, but he understood the importance of Latino/Hispanic ministry. He saw that I attended mass but didn’t take communion. Because I had grown up in the Roman Catholic Church, I was tormented by the sin of divorce. With the help of someone who spoke Spanish, Rev. Mac asked why I didn’t take communion. When I told him that it was because I was divorced, he explained that I was all right with God, and that I could take communion. That is how he opened the doors of the Church for me. Later, he asked if I wanted to be an acolyte, and that was the beginning of my service at Trinity.

At that time, Trinity’s English-speaking congregation was large. At the same time, many Latino/Hispanic children began coming to the church, and I had the idea of starting a daycare. I called it a ‘daycare,’ but it was actually a Sunday school where we taught the children about God. I had a calendar for rotating the teachers so no one would feel tired or stuck. When that first group of children grew older, we decided to offer first communion classes for them, as was customary in our Roman Catholic tradition. As the Latino group grew larger, the English-speaking group became smaller.

When the Rev. Anna Olson arrived in 2002 as priest in charge, the Latino/Hispanic congregation realized that Trinity was Episcopalian and not Roman Catholic. Many left, but some people returned later. Anna trained me to become the congregation’s senior warden.

During Father Mac’s time, members of the English-speaking congregation with more substantial resources had maintained the church’s finances. We didn’t hear much about stewardship. I was helping with Christian education and other ministries in the Church, and I wasn’t ready to make a pledge. When Anna arrived, we began hearing more about stewardship, and as senior warden, I learned about the church’s finances.

It is not easy to feel the desire to pledge, because putting money in the plate every Sunday is easier and a smaller commitment. I was out of work for a while and wasn’t able to save, but I survived by preparing and selling food. I saw that God didn’t take what I needed and always provided for me and my daughter. Since I was the senior warden, I asked myself: “Why not make a pledge to God?”

When I began pledging it was because I wanted to thank God. Even though I have had some hardship, I have never lacked a place to live, food or clothing. I pledge because I am so thankful for what God has done in my life.

When the Rev. Liz Munoz became Trinity’s rector in 2006, she trained me to lead baptism and confirmation classes and sent me for training in Godly Play. Under her leadership, I was elected treasurer because the congregation needed a person in that role who spoke Spanish. As treasurer, I could explain the financial reports, expenses, budgets and administration to the congregation. Financial reports and teaching about the church’s financial needs helps the congregation understand why their pledges are needed.

As a daughter of God, I am grateful and I passionate about continuing the work of Jesus. The talent and time that we dedicate to a church is very important, and we should not focus on the financial aspect alone in teaching about stewardship. If we do, we lose sight of the main vision, that the Church is Christ and his teachings, and we must try to follow his path.

I have learned that when talking with members of the congregation of all ages about stewardship, the most important thing is to be transparent about the finances of the church. Also important are quarterly reports that explain the church’s situation and the way money is handled in language that everyone can understand. It is important to educate the people about how their offerings and pledges are used. When they are aware of a situation, they want to help and they will donate.

Personal examples are important in promoting stewardship. I invite people to share stories that show their gratitude for the help they receive from God. I also read Bible passages that talk about giving. I remind the people that giving is a gift. Let us remember, too, not only to talk about stewardship during the stewardship campaign, but also throughout the year. Because I think everyone should have the opportunity to give, I invite the children in my daycare to give a coin, and that can begin their pledging.

My relationship with Jesus has grown a lot since I began pledging. The truth is, that when I was incarcerated and facing death I was greatly inspired to work with young people and children. God has invited me to give more, to be grateful and to commit to give still more. This commitment is with God. When I offer my pledge, I never think, “Oh, this money will be used for this or that.” Instead, I say, “Thank you Lord for all you give me and for giving me the gift of giving!”

Margarita Gomez Posada started her life in the Episcopal Church as an accountant in the diocese of El Salvador. She loves to learn and tries to attend and learn from as many church conferences as possible. Margarita is trained in Godly Play and hopes to take what she has learned to other churches around her diocese. 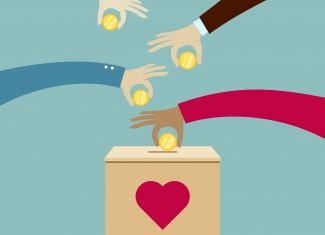