Twitter Facebook Link
Loren Mead
“I really had a bad experience my first time on the vestry,” Anne said to me. Of course that upset me. In my years as a pastor I really did all I could, especially with my senior warden, to make our work as a vestry effective and enjoyable. Indeed, I hoped vestry leaders would have some fun.
Anne was the first to say something like that to me and it made me come up short. Later, Chuck Olsen, author of Transforming Church Boards, let me in on a dark secret — apparently lots of people run into negative experiences.

Over the years since, I've used various methods to help retreats become both a time where work is done well, and participants experience a spiritually positive experience. Such a time needs to be a bridge when we ourselves do some growing and find ourselves fed as persons and as disciples.

Let me suggest a way you and your vestry can work at this issue. Here is a design you can use and develop yourselves, without a consultant, thus the name “bootstrap”:

Either in your first vestry meeting of the year or on your annual retreat, begin by splitting up into “classes." I call them freshmen, middlers, and seniors, since many vestry terms are for three years. You should end up with three groups of four, or five or six, depending on the size of each “class” and when people are scheduled to rotate off the vestry. In each step, have one person lead and another make notes to report out later.

STEP TWO
The leader should begin by asking each group to take fifteen minutes to summarize what their discussion has clarified for them about:
STEP THREE

STEP FOUR
With all the groups assembled, list “guidelines” to be used for making vestry work more effective and rewarding. If possible, write the list on newsprint for display at future meetings.

One option is to revise and repeat exercises like this in subsequent years — because each time gives vestry members a chance to review HOW they are doing their work and how they are feeling about it.

Nobody wants the new vestry members in your congregation to feel the way Anne did after her first term. Vestry retreats are good opportunities to name the challenges, offer feedback, and chart a new course.

The founder of the Alban Institute in Washington, DC, the Rev. Loren Mead is a well-known author, educator and consultant who works to strengthen religious institutions, especially local congregations.
This article is part of the November 2009 Vestry Papers issue on Vestry Retreats
Don't miss an issue! SUBSCRIBE
Twitter Facebook Link 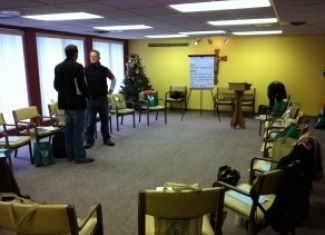