Dr. Alan Watton was ninety years old when he started coming to church, via a ride from our hospitality chairs (a husband and wife team). After the first service, he stopped on his way out and asked if I made home visits. Of course I did, and that was the beginning of a wonderful relationship in which I was honored to introduce him to Christ and the Episcopal church.

At the same time our congregation was wrestling with moving the communion table and kneelers — a sensitive issue — Alan’s health began to fail. In order to get to the communion rail at our church, you have to travel up a few stairs and then across the chancel to get to the altar rail. Alan had to use a walker and was on oxygen, yet every Sunday he insisted on being helped up to the rail. Sometimes it was such a struggle for him that he had to be assisted by a person under each arm. Sometimes he would get to the rail and declare, “I made it!” Alan never spoke a word about the issue, but his weekly efforts spoke more eloquently and convincingly than any sermon.

Alan’s gift to us was a living example of why we needed to become more hospitable and inclusive. We did complete the sanctuary renovations. Sadly, by the time they were done, Alan was too ill to come to church. Within a few weeks of returning to the sanctuary, he died.

I am sure he no longer struggles to receive communion. And sometimes when someone who is in a walker or wheelchair comes forward with the rest of us, I still glimpse Alan’s earnest face and outstretched hands.

The Rev. Judith Doran is assistant to the rector at St. Paul’s Episcopal Church in Dayton, Ohio. 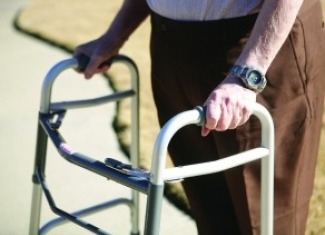