Part of One Body

As I write this, I am working on salvaging a retreat weekend. One of my seminary classmates and I have been planning the retreat for months, and now, a day before it was to happen, it is being canceled due to a situation completely out of our control. In the midst of my sadness and disappointment and through a series of emails and texts, we have worked out a plan B. The leaders and two stakeholders from the organization that was to participate in the retreat will gather anyway. I am feeling hopeful that something will come out of this – not what I had expected, perhaps, but perhaps something good, something from God. And I am reminded of the many times something like this happened when I was serving as warden of my home church.

When asked to be warden, I had already been a member of St. George’s in Newburgh for over ten years. I had been confirmed there, had watched our daughters serve as acolytes and had legally married my wife there. She and I had sung in the choir together for years, and both of us had previously served on vestry. Still, there was something different about this, something that grabbed me and undeniably changed me.

One friend warned me against accepting a warden nomination. “It will ruin your spirituality,” he said. “You will be trying to worship, and you’ll notice the cracking plaster and all the things needing repair. Plus, people will be coming to you at coffee hour with all the problems.” Yes, all this turned out to be true. Yet my friend’s prediction didn’t come to pass. In fact, I found the opposite to be the case – the work, even with its problems and frustrations, greatly awakened my spiritual life.

I was assigned to be the property warden, an area I basically knew nothing about. Other than killing the occasional bug or plunging a toilet, I am not a handy person at home. So in my first meetings, our buildings committee walked around so that I could see and learn about everything. We climbed up into the bell tower, and we stooped to walk through the labyrinthine dirt cellar, full of relics from past eras. And in that committee, I was opened to seeing for the first time a living example of the Body of Christ – everyone doing their part for this church with almost no property budget, quietly and without fanfare.

Now when I sat in worship, to be sure I was aware of the cracks and other flaws, but I could also look at the altar rail that one committee member had fixed, or the chair in the parish hall that another member had taken home and repaired. I could think with wonder on the many times that a repair or upgrade was identified and with little to no budget, people donated, volunteered, passed the hat and otherwise made amazing things happen.

Several months after my start as warden, we were preparing for an architect’s survey, the first step on a long and deliberate path that led to a capital campaign and plan for structural restoration of the 200-year-old building. When the architect told us that all those cellar artifacts needed to go before the survey could be accurately done, the Body sprung into action. Over a weekend, building committee members and their spouses and friends dragged one thing after another up to the curb and swept away piles of debris. A good friend of the church hauled it all away in his truck.

Later, as a seminarian, I would say to my fellow chaplain interns, “doing God’s plan is funner when you do it together!” It’s what I learned from that building committee.

Even in less joyful times, I felt a strong sense of purpose in my time on the vestry. There were the boiler and furnace problems, tromping around in the cellar after a rain to find the leaks in the church’s two behemoth heating systems, and the daunting problems discovered in the survey conducted by the architect and engineer. By facing these things together – the rector, wardens, vestry and congregation – we got through them. We learned and grew together.

I don’t think it’s any coincidence that during this time, I started feeling the pull to pray more and in different ways than ever before. In silence, journal writing, spiritual reading and more frequent worship. In the prayer go-around at the end of vestry, I began to find my voice. I went to a workshop the rector led on the Daily Office, and was moved to start a weekly Evening Prayer at our church. There was a little fire growing inside me, something kindled in part by that innocent little “yes” I said to being warden.

And it all worked together. The well of prayer I was growing helped with the challenges. There was the difficult year when our small church community had eleven funerals. A couple years later, there was the morning when I sat with the rector in his office as we absorbed the shocking news that our music director had suddenly died of a heart attack. We sat quietly, talking out a way to move forward. We got through it, grieved and reflected and made a plan B. And prayed. Together.

This is not one of those “how I joined vestry and we grew our church into a bazillion people and we did tons of good works in the community” stories. To be sure, we did do a lot of great stuff at St. George’s in the almost four years I served on vestry. Church involvement and spiritual commitment grew during that time. I participated in two very successful plays, which brought local youth, and a nearby monastery in as partners. The capital campaign was successfully completed. Evening Prayer continued for a few years and involved other lay worship leaders. Our little church continued to do incredible outreach, operating a large food pantry and two youth programs.

But this is not what is foremost on my mind as I sit writing this, reflecting on how I am now halfway through my time at seminary. It is another signpost in my path to ordination as a priest, a path that I now realize I was already on when I was waking up to Christ’s body there in the St. George’s building committee. What is striking me most today is that body, that community – and how without others I likely would never have awakened to the presence of God right in front of me. Without that body, the fire inside might never have been kindled. Without that community, I would not be here now.

Now I am not trying to say that serving on the vestry will put you on the path to the priesthood. There is always a risk, of course! But your call is likely to be something entirely different. What I am saying is that we often discover our deepest gifts and deepest selves in community, by learning and growing and working and playing and being frustrated and grieving together. We become our truest selves as a part of one Body.

This, I learned while serving as a property warden.

After twenty years as a psychiatrist and hospital administrator, Mary Barber is now in her second year at Episcopal Divinity School at Union Theological Seminary. She is a postulant for the priesthood in the Diocese of New York. She lives in Newburgh, NY, with her wife Alleyne, and they are the proud mothers of two lifelong Episcopalians. 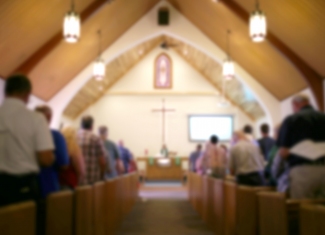