A Native Sense of Stewardship

Michael: For more than a hundred years, St. Elizabeth’s Episcopal Church has served the people of the Uintah and Ouray Ute Reservation in Whiterocks, Utah. After I had been the vicar for a year, it seemed like time for a fall stewardship campaign. Since there hadn’t been one the year before, I made some simple pledge cards and showed them to one of the elders.

“Indians don’t sign papers like that,” he said, so I put them away. What wasn’t clear to me was that those cards were not necessary in this congregation.

We all learn about stewardship before we’re old enough to use a word like that. We pick up messages from the adults around us about what’s abundant and what’s scarce. We observe the power and status that come from having money or what’s it’s like when we don’t have it. We internalize the values of our culture, and as a white priest called to serve a Native congregation, many of the assumptions I brought with me needed to be reconsidered.

Forrest: I have seen that for white people, a gift is when a wealthy person gives what’s left over. For Native people, every new day is a gift and whatever comes with it. In our culture wealth is measured by what’s given away. Generosity is our number one shared value. All of God’s creation is sacred, and all things are interrelated.

Lunch program grows, sustained by an outbreak of generosity

Michael: When the pandemic struck, St. Elizabeth’s popular Art Empowers program had to shut down. One day dozens of kids and teens were making art, playing games and eating dinner together, and the next they were all stuck at home. Because of our close connections with them, we wondered whether they were getting enough to eat. School lunches were still being provided, but there were no buses and the school is ten miles away. 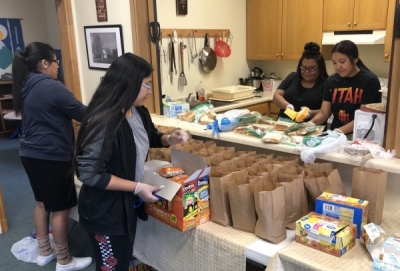 Our youth leader, Becca Gardner, went grocery shopping, picked up her three nieces and came to the parish hall to make sack lunches. They dropped them off with the families who live nearby, but 30 lunches weren’t enough. There were grandmothers and younger siblings in every house – 75 meals a day was more like it. Sometimes art supplies or paperback books were included for the cooped-up kids.
After five hundred lunches had been prepared, our Bishop’s Committee realized how costly the program was. “We can’t stop,” the lunch makers said, and so we didn’t. Word got out in the congregation, and half a dozen people put $100 bills in the offering plate. Checks came in from friends who read about the lunches in our newsletter. We didn’t appeal for donations, but by the end of the summer we’d made 2,000 lunches and all the expenses had been covered, an outbreak of generosity in our little church. (Photo credit: Lunch Makers - Rev Michael Carney)

Connected to the Creator throughout loss and displacement

Was that just a caring response to the pandemic or an expression of deeply-rooted values? Consider how the Utes dealt with the loss of their once-abundant land. For years without number they’d lived in the rugged and beautiful mountains stretching from Colorado Springs to Salt Lake City. Then waves of white settlers encroached upon them, treaties were broken and they were forced onto a reservation in the high sagebrush desert of northeast Utah.

Even after being displaced to a new land, the Utes remained deeply connected with the Creator, celebrating that relationship through daily prayer and seasonal ceremonies. They were not farmers, but among the free-flowing rivers at the foot of the Uintah Mountains they were able to hunt, fish and gather the food they needed. “Progress” wouldn’t leave them alone, however, and their communal land was broken up into allotments. “Excess” land was given to white homesteaders, and today less than one-third of the original reservation remains with the Ute Indian Tribe.

Forrest: Despite all that happened, I was taught that the earth, like the spirit within us, was a gift from God. My mother told me that abundance is the consequence of our gratitude, not the value of our possessions. “Appreciate what you have,” she said, “and you’ll have more of what you need.”

Her uncle Billy Chapoose Sr., Wapenas, was a beloved grandfather to me and a deeply spiritual man. He was a community leader, a prominent singer and fire keeper for the Sun Dance. Because he saw the land as a gift, Wapenas guarded his allotment and treated it with reverence. In a simple outbuilding he and his friends gathered with their drum, practicing songs (prayers) for the Bear Dance, Sun Dance, Pow Wow and other occasions. The land and the prayers and their relationship with the Creator were inseparable. In the midst of the assaults on our culture, that place remained an oasis of the sacred which I was grateful to inherit. (Photo credit: Uncle Billy Chapoose and friends-Leo Thorne, Leo Thorne Collection, Vernal, Utah)

Time has brought me a lot of personal growth and healing, and the land played a big part in that. Now that I’m retired, I get to share the gifts that have come to me. When people visit my horses or camp on the land, when foxes or sandhill cranes or elk pass by, when my friends join together in the sweat lodge, I feel Uncle Billy’s spirit with us. Fifty years after the end of his life, when my son and grandchildren are here, I know that the cycles of Creation are continuing.

Michael: So often clergy have come to Native communities carrying the values and assumptions of the dominant culture. Not only has harm been done, but opportunities for learning and growth have been lost. It was illuminating for me to discover that a “possession” as modest as Wapenas’ allotment is so deeply infused with prayer.

Being immersed in another culture and hearing the wisdom of its elders has opened up new possibilities for spiritual growth. It’s not all rosy – the problems the Utes deal with can be devastating. But Forrest and others have made it clear how much my people have to learn about stewardship. Listening to their stories and trusting more in the Creator than in our wealth are good places to begin. I’m thankful for those insights, and for the church that has brought us together.

Forrest S. Cuch is an enrolled member of the Ute Indian Tribe. He was born in 1951 and raised on the Uintah and Ouray Ute Indian Reservation in northeastern Utah. In 1973, he graduated from Westminster College with a Bachelor of Arts Degree in the Behavioral Sciences. During his 38-year career, Forrest has held many challenging directorships in both tribal and state governments. He is currently engaged in working with spiritual leaders throughout the Western Hemisphere to usher in the new shift in feminine consciousness known of as the New Earth and calling attention to Climate Change and harm to Mother Earth.

The Reverend Michael Carney is a white priest who’s served for the past four years at St. Elizabeth’s Episcopal Church on the Uintah and Ouray Ute Reservation in northeast Utah. He’s an active member of the Episcopal Indigenous Ministries community and coordinates the Mountains and Deserts ministry coalition. A husband, stepfather and grandfather, Michael enjoys hiking, gardening, reading and music. 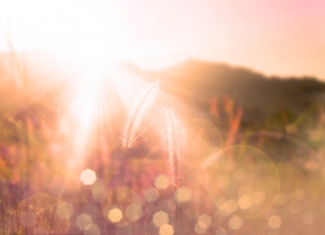