We’re living in a world that’s out of balance. Some people have plenty, but most have too little. Those with the greatest power and influence seem to have lost touch with the Creator and lost respect for Creation. Unless we can make fundamental changes, our future is bleak.

But where to begin? The destructive forces and nasty politics surrounding us can seem overwhelming, and it’s hard to know how to resist. We have been blessed by being among the leaders of a small but vibrant Episcopal church, making a difference on the Ute Reservation in northeast Utah. While our people face many challenges, their spiritual traditions contribute to a growing sense of resilience.

Each day is a gift

For a middle-class white person like me (Michael), raised in the dominant culture, there have been many “aha” moments in my six years here. Here’s something basic I’ve learned: every day is a gift from the Creator. The blessings of each day are not meant to give us whatever we want, but to meet our deepest needs. Our communities and Creation herself are not “out there” somewhere; we’re part of them and they’re part of us. When Native people speak of “all my relations,” they’re referring to the entire living earth, including their human relatives and neighbors.

If every day is a gift from the Creator, the natural response is gratitude. I (Forrest) was blessed as a young man by knowing Jensen Jack, a Sun Dance chief. He told me, “You go to church one day a week to thank God. Me, I pray and give thanks throughout the day. I wake up, and say thank you for the gift of this day. I drink water, eat food, give thanks again. Turgwayaq in Ute. When I see my friends and family, I give thanks again. I live my church every day, all through the day.”

Generosity springs from connection to the Creator and one another

After the Civil War, the Uintah band of Utes from which my family is descended was forcibly moved from their ancestral lands in the rich habitat south of present-day Salt Lake City, to the high desert area where we live today. That wrenching change must have been traumatic, but they stayed deeply connected with the Creator and always took care of one another. They shared everything from food, to caring for the young and old, to providing lodging and other needs. Possessions were held in common, and if anyone had food, then everyone ate. Sharing wasn’t just something they did; it was who they were, their way of life. Faithfulness and generosity were among their most important survival skills. This isn’t just among the Utes. Anthropologist Carlos Barrios has identified generosity as the number-one shared value of Native people throughout the western hemisphere.

While family was important in my (Michael’s) upbringing, the focus was on my parents, sisters and me. We had many friends in the community, but we “minded our own business” and they minded theirs. Our relatives had moved around for their jobs and were known mainly through yearly Christmas cards. My background didn’t seem lonely or disconnected until a West African friend told me, “a cousin to you is like a brother or sister to me.” His immigrant community has a strong sense of belonging to one another, and they’re very responsive to each other’s needs. Could our church congregations become more like that? So many of us experience a sense of isolation in our daily lives and need more human connection and support.

We have what we need

Not only that, but our country as a whole has become disconnected from the earth. The dominant culture’s misguided focus on controlling the environment and extracting “natural” resources puts us in opposition to the sanctity of Creation. Though our traditional ways have been severely disrupted, my (Forrest’s) people never forgot that we belong to ecological communities. After the shock of being displaced by settlers, our ancestors learned what they needed to survive, shared generously with one another and continued to pray throughout each day. My mother taught me that abundance is not a matter of possessions, but a consequence of gratitude. “If you’re thankful for what you have,” she often said, “you’ll get more.” We may not be given everything we want, but we have what we really need.

Jesus warned us about people who “store up treasures for themselves but are not rich toward God.” (Luke 12:21) We can begin by focusing more on our gratitude for the blessings we’ve received than on what we think we want. We can remember to value relationships more than possessions, which will lead to more generous sharing with one another. We can expand our sense of family from “nuclear” to “extended” to “all my relations,” including all of God’s Creation. A life-giving cycle is created as gratitude leads to generosity, promoting a sense of abundance that generates still more gratitude, making the cycle self-perpetuating. Thanks be to God!

Forrest S. Cuch is an enrolled member of the Ute Indian Tribe. Raised on the Uintah and Ouray Ute Indian Reservation in northeastern Utah, he graduated from Westminster College with a B.A. in the Behavioral Sciences in 1973, and has held many challenging directorships in both tribal and state governments. The Reverend Michael Carney has served for the past six years at St. Elizabeth’s Episcopal Church on the Uintah and Ouray Ute Reservation. He is an active member of the Episcopal Indigenous Ministries community and coordinator for the Mountains and Deserts ministry coalition.

Forrest and Michael share more of their ideas and stories in A Native Way of Giving, available in paperback or as an eBook here. They would also be glad to join your book study group or adult forum via Zoom, and can be contacted at stelizabethsut@gmail.com. 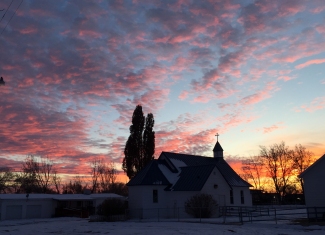