I remember my first pledge to a church’s annual giving campaign. I was about 24 years old; a seminary student, married to a schoolteacher. We had more bills than money then, but I was on my way to becoming a priest and though I didn’t know much, I knew that I should give. I had a basic biblical understanding that God expects faithful people to be generous, and I was familiar enough with churches to realize that they rely on committed members to give. Feeling so obligated, I swallowed hard and committed our household to fifty dollars per month.

It certainly felt like a sacrifice, but only because we hadn’t learned to live within our means then. That didn’t happen until some years later…two babies, a mortgage, plus twenty-five thousand in debt later. In more ways than one, we felt spread too thin. I came to realize that the financial stress was toxic to our family and sucked the joy out of our giving. I wanted to feel the gratitude and joy that I was preaching about, so we decided to make some changes, with the goals of being debt-free and giving according to the biblical standard of the tithe – ten percent of our income.

That decision was one of the best we ever made. It seemed impossible at the time, but we began to increase our giving as we started making big payments to get rid of the debt. Within about eighteen months, we were debt-free (except for the mortgage), we were saving and we were tithing. I expected that this would increase the overall health of our family, and it did. I did not fully expect the spiritual transformation that accompanied this change:
· I felt liberated, grateful, and empowered with the ability to take control of how we used our resources.
· Stewardship no longer felt like an obligation, but a joy.
· No more agonizing about how much we could afford to give each year – we simply calculate ten percent and give at least that much.
· Each year we celebrate, knowing that our tithe makes a difference in the world and we are doing our part.

Perhaps it shouldn’t have come as a surprise that adherence to such an ancient idea could be so life-giving now, but it did. Having experienced it, I am compelled to share it by encouraging others to find their way on God’s path of liberation through generous giving.

The Old and New Testaments have a lot to say about giving. Those ancient theologians describe faithful giving as a priority, an intentional commitment, a regular habit, something to be done with a spirit of generosity, an equalizer of the rich and poor, and a cheerful practice.[i] I have found that the singular practice of tithing ties them all together, and the old trail markers of scripture work as well for us now as they did thousands of years ago.

Make giving a priority (Deuteronomy 6:1-2) God asks that we give of our “first fruits” because God knows us well. When we fail to make giving a priority, we spend it first, wasting our opportunities to use our resources for a higher purpose. We no longer make our offering from the harvest, but we can practice the same idea with our paychecks. I set up automatic payments to go to the church monthly from my bank on the day after my paycheck is deposited.

Make an intentional commitment (2 Corinthians 9:6-7a) Paul discourages compulsory giving to make a gracious space for the individual spiritual journey. Even if we’re not tithing yet, the standard can serve as a guidepost to making a thoughtful and intentional gift. One suggestion is to choose a percentage of your income as a starting place or figure out the percentage of your income you’re giving now. Then calculate how much it would be to increase that by one percent of income. Take a thoughtful and intentional step toward tithing.

Make giving a regular habit (1 Corinthians 16:2) Like any spiritual discipline, giving is best when practiced regularly. In his first letter to the Corinthians, Paul encourages a weekly collection, because he knows that a little out of each week’s income is much easier than a lot out of a year’s income. Today, most people receive their paychecks by direct deposit on a bi-weekly or monthly schedule. Electronic payments can just as easily be scheduled to make a regular habit of giving.

Give generously (2 Corinthians 8:1-2) Generous giving is an attitude of the heart, and a response to God’s generosity toward us. In Christ, God gives us all – one hundred percent – and invites us to give all of ourselves in return. In the twenty-four hour news cycle of our contemporary world, we are constantly bombarded with messages of scarcity. For many, this heightens the anxiety around giving. Learning to give generously is a brave act, as we embrace the Good News of God’s abundance, and a balm to our souls, as we rest in God’s never-ending grace.

We all have something to give (Mark 12:41-44) When Jesus showed his disciples how the widow gave her last two coins, he taught us that God doesn’t consider the amount of the gift but sees how much the gift represents. I take this as encouragement that rich and poor alike can honor God with their giving. Your tithe may be a different dollar amount than mine, but God values them equally. All faithful gifts are honored.

Give cheerfully, “for God loves a cheerful giver” (2 Corinthians 9:7b) When giving is prioritized, intentional, regular, generous and honored, I find that our fears around giving are finally replaced by that spiritual blessing of cheerfulness. In our parish, we use a “Candy Tithe” to teach this lesson. After collecting their Halloween treats, children are encouraged to go home with their parents and count out their candy in tens. The first of every ten goes into a pile to give away, and nine go into another to keep. For children of a certain age, it’s a delightful exercise as they discover how big their pile is to keep, and their parents realize how small the donation pile is! When each child’s ten percent is collected, it is amazing to see how they multiply. It’s a sweet glimpse into the kingdom of heaven!

Like many, I used to be uncomfortable talking about money, worried that others would feel shame or resistance. Those feelings were reflections of my own reluctance about giving. Having learned to tithe, I now give thanks that I have resources from which to give, and I love knowing that my contributions are making a difference in the ministry of our Church. Cheerfully, I embrace that the ancient idea of tithing is part of God’s ongoing good intentions for us. This is a journey of grace, and I’m glad that we can help one another along the path.

The Rev. Mary Vano is rector of St. Margaret’s Episcopal Church in Little Rock, where she also serves as the Chair of the Commission on Ministry for the Diocese of Arkansas. Mary received a M.Div. from the Seminary of the Southwest in 2003, and previously worked on the staff of St. David’s in Austin, Texas. 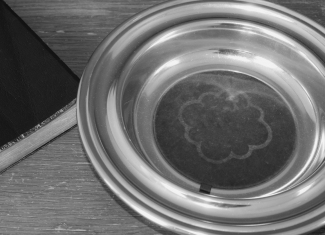