Do we really believe in resurrection? That is the question that the people of St. Alban’s Episcopal Church in Waco, Texas, asked themselves after closing St. Alban’s Memorial School, an Episcopal school that had served the children of Waco for 60 years.

St. Alban’s Memorial School was founded in 1946 to minister to and educate children from pre-school up through the sixth grade. At the time of its founding, St. Alban’s was the only Protestant parochial school in the Waco area. However, by 2006, after several years of declining enrollment and with increased options in the private school arena, the parish was faced with mounting deficits related to the operation of the school.

In December of 2006, the Vestry closed St. Alban’s Memorial School. All school faculty and staff were now unemployed. The local television stations covered the final school chapel service. The children were dismissed and the halls of the school building were empty, cold, and silent.

As the rector, I challenged the parish to listen to the needs of the community and to do something new and significant with the now empty school building. Prayer was the first step; I would walk down the cavernous halls of the building and literally ask: “O God, what are we going to do with this school building?”

Parish activities, such as vestry meetings, were moved into the old school building. At the annual parish meeting, every parishioner was asked to brainstorm how the empty building could be used to serve the community. During Lent, the parish held weekly “holy conversations,” inviting leaders of Waco’s ‘helping’ organizations to talk about the real (rather than perceived) needs among the people of our city. We listened to every idea; no idea was too small or large. A Community Outreach Council was formed for discernment. In the process, we figured out what we were good at as a church: worship, music, and the arts.

And then, the Holy Spirit began to speak. The director of the Central Texas String Academy, an Episcopalian from another parish in Waco, needed space to run her program. The string academy teaches children using the Suzuki method. St. Alban’s now had its first outreach partner. Violin and cello music filled the halls and full orchestras were provided on occasion during Sunday worship in the church.

Waco Children’s Theatre then asked if they could move their operations into the old building, using classrooms to teach children drama and dance. The children’s theatre kids even acted out the scripture at St. Alban’s Easter Vigil! Then Camp Fire USA moved in. Camp Fire’s offices and classrooms host after-school and summer programs for children.

The Vestry of St. Alban’s quickly realized that the old school building was now bustling with people from the community. Therefore, the building was renamed: the St. Alban’s Outreach Center.

A year later, Avance Waco partnered with our Outreach Center to serve as one of their educational facilities. With programs tailored primarily to Hispanic/Latino families Avance teaches preschool children and their parents educational and life skills to enable children to be successful in school. GED ad ESL classes are also offered.

Now, both Spanish and English voices fill the halls of St. Alban’s. The people of St. Alban’s are receiving “on-the-job-training” on how to become a multicultural community.

St. Alban’s Outreach Center now serves four times as many people in the community than we did when we operated a school. We have four outreach partners each paying rent to the parish. The parish has also grown by leaps and bounds; average Sunday attendance is up over 60% from 2005. We now have parishioners who do not remember us ever operating a school. A new day of resurrection has truly dawned.

Yet the road has not been easy. The leadership and I realized one day that we were calling the organizations in our buildings “tenants,” which was really not very welcoming. So we changed our vocabulary and call the people sharing our buildings “outreach partners.” I brought a jar into vestry meetings with the word “tenant” on it and big red X over that word. If any vestry member used the word “tenant” instead of “outreach partner,” a dollar was put in the jar! To foster further partnership, each outreach partner is assigned a parishioner to be a liaison, to strengthen ties between the parish and each outreach organization. Also, a joint bilingual Bible study and lunch last fall with the Avance staff and church staff did wonders in increasing understanding and cooperation.

At St. Alban’s Episcopal Church in Waco, Texas, our people have truly experienced resurrection, making us less fearful to try more new things for God. At St. Alban’s, we believe in Jesus, who sits on the throne and says: “Behold, I make all things new.”

The Rev. Jeff W. Fisher has been the rector of St. Alban’s Episcopal Church in Waco, Texas, since 2006. In the last five years, the parish has experienced unprecedented growth in membership, pledged income, and attendance. 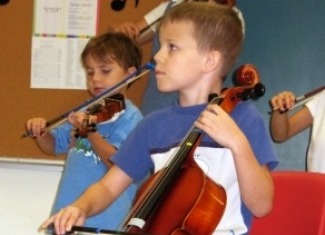