Lessons from an Annual Giving Campaign

Trinity Episcopal Cathedral in Cleveland is home to a diverse congregation of more than 850 people. Some of us are cradle Episcopalians familiar with an annual pledge; others are new to the Episcopal Church and have never pledged.

As with all churches, 2009 was challenging for Trinity. Our endowment was down. Many of our working members had lost their jobs and our retired members saw losses in their pensions and investments. Our city had lost significant population and foreclosures were too common. The unemployment rate was over 9 percent and climbing. The vestry had made painful choices to reduce staff and programs. For a large part of the year our dean, Tracey Lind, was the only clergyperson on staff.

While annual giving had increased every year for the last ten years, the prospects for the 2010 campaign looked bleak. In the past, our annual stewardship campaign had been limited to a written appeal and a sermon on Stewardship Sunday. In the economic climate of fall 2009, our minimalist approach was not going to work.

We were blessed to have Bailey Herrington, a retired Lutheran minister and member of the congregation, to head our campaign. Perhaps Bailey’s experience as a preacher informed his decision that a successful campaign had to be congregation-led and congregation-involved. Bailey made sure that the ministry of the laity was a central theme of the campaign, as indicated in the opening of the letter sent to all members at the outset of the campaign:

"Each Sunday in worship, the people of Trinity Cathedral affirm our faith by reciting five vows from the Baptismal Covenant of the Episcopal Church’s Book of Common Prayer:

✙ Will you continue in the apostle’s teaching and fellowship, in the breaking of bread, and in the prayers?
✙ Will you persevere in resisting evil, and, whenever you fall into sin, repent and return to the Lord?
✙ Will you proclaim by word and example the Good News of God in Christ?
✙ Will you seek and serve Christ in all persons, loving your neighbor as yourself?
✙ Will you strive for justice and peace among all people, and respect the dignity of every human being?

To each question, we respond: I will, with God’s help.

When we recite our baptismal vows, we are renewed in and reminded of God’s call in our lives and the life of Trinity Cathedral. We are all ministers of God’s word by virtue of our baptism, and we are all called by God to proclaim, in word and action, God’s justice, love and mercy for all creation."

Bailey also believed that we had to repeat our annual giving message often and that a single Stewardship Sunday message from the dean, no matter how persuasive, would not be enough. Understanding that “repetition is the mother of donation,” Bailey and the stewardship committee assembled members of the congregation from all walks of life — young, old, employed and unemployed — to speak at all services on successive Sundays before the actual Stewardship Sunday. They told personal stories of what Trinity and stewardship meant to each of them and each spoke in a different way to reach different members.

We also adopted a “Don’t Ask; Tell” philosophy. Everyone involved in the campaign was educated about our ministries and our message was focused on ministry, not money. We explained where pledge dollars went and how every member’s financial contribution supported the programs and ministries that are important to our congregation.

On Stewardship Sunday itself, a lay member of the congregation preached. (True humility prevents me from commenting on the brilliance of that sermon). Because many of our members come from faith traditions that do not share our practice of annual pledging, we sought to explain the importance of budget forecasting and the impact of pledges on programs and ministries.

As our cathedral sits in the middle of an urban university campus and draws from that community of students and faculty, we encouraged online pledging and payments and published podcasts of individual congregation members talking about the importance of our annual campaign. Lay involvement was also critical after the campaign. Every member who pledged received a personal letter of thanks signed by the dean, the head of the development committee and the chair of the stewardship campaign. People who increased their pledges significantly were personally contacted so we could express our thanks directly.

The 2010 campaign that started with grim prospects ended successfully with just over a six percent increase from 2009. Of our total 2010 pledges, seventeen percent were new pledges. Forty-one percent were increased pledges. Thirty-two percent were the same as 2009 and less than ten percent decreased.

Clearly we succeeded in educating members about the significance of the annual campaign and the importance of pledging. Too often when it comes to an annual campaign we ask our pastors to be “pesters.” We expect them to raise the money, collect it and account for it. If, in fact, we believe in a priesthood of the laity, then it is important that the laity not only share in the work of an annual campaign but also take leadership in that work.

At Trinity we believe that the priesthood of the laity involves all of our members in all phases of church life. Giving is part of that life.

David Posteraro is junior warden of Trinity Cathedral in Cleveland, Ohio, and a partner in the law firm of Kohrman Jackson & Krantz where he practices intellectual property and business law. 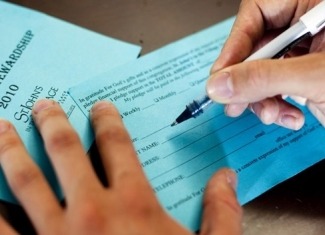