In the Episcopal faith, children are full members from birth. We create Sunday school programs for them, and choirs, vacation bible schools, and retreats. But even when they cross into the age of reason, we often fail to include our youth in one of the most central aspects of our faith, the governance of our church. Until they come knocking, that is.

But knock they did in late January, quite loudly in fact. Caroline Christie, age 17 and Gibson Oakley, age 16, came to Diocesan Convention and stood for election as lay deputies to General Convention in 2012, alongside seven other candidates who were often decades their elders. Grounded in their belief that they had both been called to serve the Diocese of Newark, the young people carried the day. The story of their election is a story of their faith and determination, and of a conscious effort by the Diocese of Newark to more fully involve young people in every part of the life of our church.

“The youth were stepping up and living their baptismal covenant of action,” says Erik G. Soldwedel, director of the diocese's young adult urban internship program, NEWARK ACTS. “And they were doing it with respect and every bit of integrity that they have.”

They also weren't doing it alone. This year at diocesan convention, all 10 districts in the Diocese of Newark were represented by youth deputies, and there were 10 youth pages. Among them were several young people who had never been to a convention before, diocesan or General. “Those who had been there before did a great job of shepherding the others along,” says Kaileen Alston, the diocese's Director of Youth and Young Adult Ministries. “It's important to have that for leadership development.”

Christie and Oakley had their share of leadership experience, through activities like the diocese's Youth Event Planning Team. Christie had been a page at the previous Diocesan Convention, and both had attended the last General Convention as spectators. But when Alston asked them last May to stand for election as deputies, they hesitated. “Oh god, I can't do this, I'll be way too busy,” Oakley recalls thinking. “Then, Caroline Christie said 'I'm considering this, but I don't want to do it alone'. We agreed to try together.”

General Convention, held every three years, is the principal governing body of the Episcopal Church. Each diocese elects eight deputies to the convention's House of Deputies, four each from the clergy and laity. At this year's Diocesan Convention, there were nine candidates in each category.

Alston saw Christie and Oakley as strong candidates from the beginning. “These two kids don't need resume material,” she says. “They were doing it because of their passion for the church and their desire to bring a new perspective to church governance, as well as their confidence that this is their church to run.”

To help them prepare their candidacies, Alston put them in touch with Louie Crew. The well-known activist had announced late last year that he was stepping out of active roles in church leadership to be a teacher to a new generation of church leaders.

The candidates and their mentor talked about the role and responsibilities of a deputy, and as the convention grew closer, they emailed Crew the speeches they intended to deliver. And they got a foretaste of how hard it might be to be both a church official and a high school student when this winter's snowstorms pushed Christie's mid-terms into the same slot as the convention's candidates forum.

“They didn't come expecting to be elected simply because they were young people,” says Crew. “They came with a passion for the church. Not the church of the future,” he adds. “This is about the church of the now. They are prepared to be that in an important way.”

In his presentation, Oakley delivered a succinct message that stressed how he could represent not just youth, but all Episcopalians through three key issues: domestic violence, volunteerism and the environment, and equal rights for the gay community. “Lesbian, gay, bisexual, and transgender people are discriminated against every day,” Oakley told the deputies. “Over eighty-five percent of LGBT students have experienced some form of harassment at school. Many of these teens feel that they have nowhere to turn and some, unfortunately, kill themselves. I believe that our own churches should be places where gay teens may turn in times of trouble.” He said that he would like to see the Episcopal Church not only bless same-sex civil unions, but also perform same-sex marriage ceremonies. “As a gay man,” he added, “I would like to walk down the aisle in a church and hear the celebrant utter the words 'I now pronounce you husbands'.”

The remarks brought those present to their feet in a loud cheer. “A lot of people said after the forum that I had their vote,” Oakley recalls, “but Louie had said that it usually takes quite a few ballots. But I was surprised how many votes I received on the first ballot. We did two ballots Friday evening and then we had to break. It was like a reality show when they interrupt the results for a commercial.”

When the balloting resumed on Saturday, it didn't take long for Oakley to become the third elected deputy. “When they put the results on the screen, I looked up but it didn't register. Then my friend said, 'You got it'. But it really struck me when Kaileen came over and gave me a big hug. I realized that what I had worked for was really coming true.”

Christie would have her own moment of drama. As the balloting wore on, she found herself competing against one candidate for the final spot—a candidate who had the same last name as hers. Caroline Christie's grandmother, Marge Christie, had stood for election in every ballot since 1976, winning or being first alternate every time. But this election would prove different. Marge Christie rose and announced to those assembled that she was withdrawing her candidacy, and embraced her granddaughter. Caroline Christie was elected. (The moment was captured in a video on youtube.com/dionewark).

“I was delighted,” says Marge Christie. “She is a very bright, energetic, interested person. I am absolutely delighted that she cares to be involved and is involved.”

The drama over the balloting had almost overcome Caroline Christie. “I thought about withdrawing at one point,” she says. “But Kaileen told me that if it were something I felt called to do I should stay with it.” She has a clear sense of her mission going forward: To help girls become church leaders, in the U.S. and abroad. “One of the issues that I am most interested in is how the church works on an international level,” she says.

The reaction to the election rippled quickly out to their home parishes, and not only among the youth. “I was so tired, I didn't go to church the next day,” says Oakley. “But my mom told me people in the parish joked they had had to arm wrestle each other to be able to announce what had happened.”

Soldwedel believes that the election sends a clear message to the youth of the Diocese of Newark, which joins a growing movement of youth activism (there were 25 deputies under the age of 30 at the 2009 General Convention, according to Crew). “If you want to be involved, you have to be there,” he says. “And it's OK to act into your faith. You have to know that if you stick your chin out you may get hit, but there is a faith community out there that will stand by you because we all believe in the same God.”

Oakley and Christie have a lot of work ahead of them to get ready for the General Convention in Indianapolis. “Caroline and I will go through it together and we are very excited,” says Oakley, who has also been elected to the vestry of his church. “The other deputies have been so welcoming about answering questions. I am confident that, with their help, I will be able to do my duties. The youth in the diocese are excited that they will have two young people representing them in Indianapolis.”

Just one small problem: When Christie and Oakley travel to meetings, because of their age, they will need chaperones. “We never thought of that before,” says Alston, “but it's a beautiful problem to have.”

“Hopefully other dioceses that think that youth aren't ready or aren’t interested in church governance will see what happened in the Diocese of Newark and be inspired. Everybody should be represented at the table and we are doing our part.”

Virginia Citrano is a former vestry member and junior warden at the Episcopal Church of the Holy Spirit in Verona, N.J. She also teaches the church's pre-school/kindergarten Sunday school class. During the week, she runs a hyperlocal news site, MyVeronaNJ.com. This article originally appeared in the Voice Online on March 16, 2011 and is reprinted with permission from the Diocese of Newark.


The General Convention of the Episcopal Church: http://generalconvention.org/gc 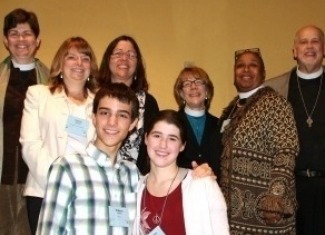 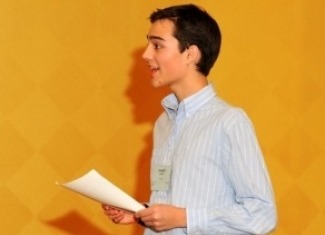