January 2002
Leadership in Times of Crisis

Faith Forged in the Fire

On September 11th, as my husband Larry and I were finishing breakfast, we heard a plane go over our house – too low and too loud for the usual air traffic approaching Newark Airport, 20 minutes away. We looked at each other in concern, and I glanced at the clock. It was a few minutes before 9 a.m.

By then, most of America knew what we did not yet know: that the plane that had roared over our city, like its hijacked companion, was aimed at the Twin Towers. My peace was shattered moments later, when my sister called in a tearful panic to be sure I was safe. After checking the news, Larry and I raced a few blocks to a low bluff overlooking the city skyline, joining the thousands around New York who watched in stunned horror as the towers fell.

Hoboken has become, in the past decade, one of Wall Street’s closest bedroom communities, and I felt certain that many of those whose deaths we were watching were our neighbors. Two memories are seared into my brain from that moment. I noticed a friend who works for a weekly news magazine with her notebook out, interviewing the distraught onlookers. For a nanosecond, I thought: “I should be doing that,” for I, too, am a journalist. But next to me, a terrified young mother was frantically trying to reach her husband by cell phone, as their baby cheerfully tossed his bottle onto the grass. All around us on that shaded overlook, people were in terrible pain – weeping, groaning, and clutching total strangers for support. I did not run home for a notebook and pencil; instead, Larry and I instinctively hurried to our church, All Saints Parish, a few blocks away on Hoboken’s main street.

A balancing act
For me, that sprint was the first step in a balancing act that continued for the rest of that surreal week. Our rector, Geoff Curtiss, had left the day before for San Francisco and was stranded there. For the first four days, the parish’s response to this ghastly wound would be the responsibility of its lay leadership and its part-time staff. But my employer, The New York Times, also faced a staggering challenge, bearing witness to a tragedy that had brought city life almost to a standstill. I needed, and wanted, to be part of that work.

The parish, fortunately, has a tiny but very creative staff. Laurie Wurm, our talented community development director, provided extraordinary leadership. At her initiative, the church’s doors were kept open around the clock on that awful Tuesday, as we provided simple food and shelter to countless commuters stranded in Hoboken by the mass transit shutdown. She organized nightly prayer services and, with parish volunteers, kept the church open for walk-in visitors.

The staff of our small parish day school, led by Betsy Deyo, was magnificent. The students were soothed and their parents were assured that the children would be cared for until they could be retrieved, however long that took. Organist Barry Oliver provided the comfort of music and our part-time business administrator fielded the phones in the office.

Indeed, when my husband and I first reached the church right after the attacks, Barry already had the doors open. After checking with Betsy and being reassured that the day school was responding appropriately, I found materials for makeshift signs announcing that the church was “Open for Prayer.” People had already begun to come in, the first of hundreds who would visit the sanctuary that week.

Then, I raced home to see if I could reach the newsroom. Soon, two Times colleagues arrived on my doorstep, unable to cross the river but ready to work. We quickly set up a tiny bureau in my husband’s office, receiving our assignments and setting out to do our work. When we had done all we could, my co-workers left for their suburban homes. And I went back to church.

Balm for the Spirit
What I found, that evening and throughout the week, was a balm for my spirit. Vestry members and other volunteers had pulled together, in our rector’s absence, to create a place of welcome and warmth. The fledgling committee system we had set up at a vestry planning retreat, held just the weekend before the disasters, was working. Our communications committee chairman kept vestry members informed, by e-mail, of the prayer service schedule. Our finance committee chairman took charge of the spontaneous donations we received, and made sure that bills were paid. Many vestry members found their work had been canceled that week, and their generous help allowed me to devote time to the newsroom.

And I know that we helped – for I was one of those who turned to All Saints for solace after long hours of sad, demanding work. I spent my days interviewing bereaved families and weaving their weeping anecdotes into stories on deadline. But whenever I walked into the doors of my church, I was embraced and comforted.

The sad but profoundly satisfying work of September 11th continues, for me, on both fronts. Under Laurie’s direction, the parish has formed a support group for eight Hoboken women widowed by the attacks. Our capital campaign, planned with such hopefulness during our vestry retreat, is confronting the same uphill slope that all non-profits are now facing. But our vestry continues to enjoy the unity and mutual respect that was forged in those first demanding days. And I continue to cover the fallout from the attacks, sustained every day by the love and encouragement I find within the parish.

Diana B. Henriques is a writer for The New York Times and a warden at All Saints Parish in Hoboken, New Jersey, where she lives. 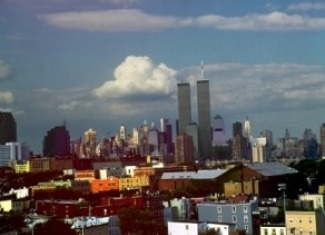