Stewardship is about life, the whole of life. It’s living the life of God, in fact – living more generously, more boldly, and more faithfully. Stewardship is everything. This is why we don’t have a stewardship drive at St. George’s in Valley Lee, Maryland, the dynamic and growing congregation I serve. Instead, we have an annual pledge drive: An appeal for people’s financial generosity.

Please don’t think us crass. It’s really the other way around.

At St. George’s we do stewardship day in and day out. It should go without saying that our Eucharistic worship reveals the abundant, self-giving nature of God. And we form our lives in God’s through sermons that deal with the whole of life, formation opportunities for all ages, sustained pastoral care, and church parties that bring together widely divergent people and call them, as one, the Body of Christ. That’s stewardship. What’s so special about that? Obviously nothing. Every church does that.

At St. George’s, though, we’ve been working on a right spirit. We celebrate and give thanks. Our leadership cares about the spirit with which we approach our common Christian life. Sure, we have green-eye-shade folks and Chicken Little’s, but our leadership is not motivated by money. When I first arrived and money (or the lack thereof) was the biggest source of anxiety, I moved the treasurer’s report to the end of the Vestry agenda, and told them why: we begin by listening to God and responding, regardless of money. If it was the other way around and we started with how much money we didn’t have, we’d never do anything but fret, let alone grow. We’ve also developed an independent finance committee. They’ve come up with very creative budgeting ideas because the Vestry has set the stage for mission-based conversations and, in turn, empowers the committee. That has set the tone with money ever since.

And, we don’t confuse stewardship with money. Financial generosity is one aspect of stewardship; talking about stewardship when you’re really trying to raise money is duplicitous and deadens its true meaning. Keeping the focus on the life of God and the call of discipleship matters more than anything else.

When congregations finally lift the veil and begin to talk about raising money, they often showcase an ominous, comprehensive, line-by-line Excel spreadsheet of a budget that on its own says nothing about the Body of Christ. Usually, the stewardship cheerleader gives the story behind the numbers. Some congregations attempt a narrative budget in which they present a pie chart of summary categories: outreach, education, administration, etc.

We tried all of that at St. George’s and it just didn’t work. For one, no one made a compelling case to me for the way a comprehensive budget reflects the mission of God. We fund things in budgets that are dead wood, and someone needs to be honest about naming these. And, every narrative budget ends up with two huge pieces of the pie: administration and personnel. Those are not appealing categories for raising money so costs may be redistributed – diocesan assessments are added to outreach and rectors are asked to account for the specific minutes spent on pastoral care or sermon prep.

At St. George’s, we’ve made our institutional operations teach the people of God what it means to live the life of God. A radically different budget is a necessary first step. We slashed our operating budget to the barest of essentials: energy costs, facilities expenses, modest administrative and altar guild stuff, and personnel. The annual pledge drive supports that operating budget, and we are audacious about claiming in real terms what it costs to have a physical plant and competent ministers. It forces our personnel, including me, to be pointedly clear about our focus, ministry, and commitment to the community. The budget is a lot shorter, so we can review every line item every year and ask whether it’s serving the mission of God as we’ve discerned. Once, I described this budgeting approach to a high-level diocesan staff person (someone known to wear purple), to which Purple raised Purple’s eyebrows as if that were the oddest thing Purple had heard, and wondered whether it would lead people to decrease their pledge. Not true. It’s the opposite: since implementing this strategy, the average pledge increased to nearly $2,000, from $1,200 where it was several years ago.

The increase in giving is based on an increase in vibrancy and participation. We didn’t so much remove line items from the budget but, rather, freed them to generate their own mission-potential. We encourage ministry groups to freely discern God’s call at that moment in our life, to dream big, and to help the congregation become more nimble and responsive. I wagered that the money would come, and would certainly come to those groups with the most compelling imagination and charismatic involvement of the community. It has. More money for ministries has been raised independent of the centralized, operating budget than was raised under the old system. Our outreach committee used to get a meager $1,300 in the old budget; now, they lead a fundraiser and bring in $6,000. But it’s not about money. It’s about a radically different church in which power is shared, discernment is constant, money is diffuse, and mission runs through it all.

And fundraisers? Officially, we have only one, our Crab Cake Festival. It’s really not a fundraiser but a FUNraiser – we create a festival atmosphere in which we celebrate one another and the heritage of southern Maryland. We’ve convinced (most of) the community that if we break even financially we’ll have accomplished our goal. It was especially surprising, when we made a lot more money than anyone thought possible.

As for the other fundraisers, even though they were motivated by the desire to do good and raise money, in reality they were driving more people away from the church than toward: they created too many chiefs, too many hurt feelings, too much burnout, and had too little to do with the mission of God.

We live with less money from fundraisers, although the income lost was slightly offset by expenses cut from the operating budget. We also left the idea of fundraisers on the table, useable by ministry groups if they want. It’s been nice to watch various ministry groups of the congregation – or a newly formed group that’s dreaming something – re-purpose these old events, turning them into FUNraisers, too. The money raised goes directly to their project or mission (with Vestry oversight and coordination), which lends a greater vibrancy to the work and has generated more participation from a wider range of parishioners. A win/win.

Stewardship needs re-framing. Our steady, institutional church, as well as our meaning-hungry world, craves the message that the God we know is abundant, generous, and in love with His world, and that there are women and men who live that way, too. For the sake of the world, we who call ourselves the Body of Christ need to live more robustly a generous life. If we are to become more courageous and less anxious stewards we also need the institutional church to work for us, not against. We need the church to become that “school for God’s service:” to teach God’s people what stewardship is and what it is not, to inspire with hopefulness and creativity the best capacities of our spirits to give and give generously, not because we must but because we may. And because we know how much more whole our lives become when we do.

Greg Syler is rector of St. George’s in Valley Lee, Maryland. He co-chairs the Collaborative Ministries Exploration Group of Region 6 of the Diocese of Washington and served as part of the group developing a summer camp program. 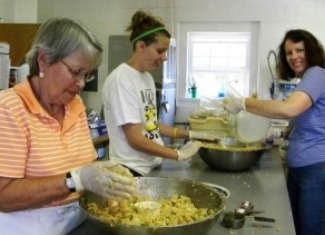