Living in a society engulfed in self-centered spending, debilitating debt, wracking fears, and relentless media encouragement to spend, spend, spend – why do we think our society will find it easy to give their money away to God or to anything or anyone else?

Too often, stewardship campaign chairpersons may perceive themselves as the “beggar” or “nagger” or “scolder” of the wider congregation. Might we instead suggest a self-perception of “coach” or “encourager” or “cheerleader?”

If you are working in stewardship or fundraising (or, as I am proposing –in both!) then you are in a ministry of presence-making if you do this right and by being in that ministry you are not raising money – you are changing lives. And that is a good thing. And when your rector gets cranky about complaints or your vestry shrinks back in reservations you just stand firm and remember your calling to be present to those congregants who need help to do what they know – deep down – is good for them.

Here’s a short parable to illustrate this notion of stewardship chairperson as coach.

When working at the YMCA I was about 30 pounds overweight. I was in my 20s, doing communications, marketing, and development work for 12 YMCA’s, a camp and conference center, and 39 childcare facilities. Each YMCA was different and each was a client of mine in a $12.4 million capital campaign. It was a time of great joy for me but also one of considerable stress. As a way to cope with the stress, I tended to move fast, sleep little, work long, and eat badly.

Given that I was a corporate YMCA leader, my boss and I had some conversations in which he gently suggested that my weight could be dealt with at the YMCA. He would model good behavior by saying a cheerful hello on his way out for his run.

Eventually I met with a fitness trainer from the downtown YMCA and asked for help losing weight. He listened with deep compassion and strength. He explained the basics of weight-loss exercise and then showed me my “road-master,” a rubber-belted running treadmill exercise machine that loomed in front of me like a medieval implement of torture. He handed me a towel and a water bottle and asked me to get on the machine. He pushed some buttons to program my exercise routine and pressed start. The belt beneath my feet began to move rather too fast for my liking. I was on level one and after only 10 minutes I was willing to confess to just about anything. “It was me! I was on the grassy knoll!” “Let me off this machine and take me away!”

My fitness trainer met me at 12:10 daily at my pre-reserved treadmill. He programmed the buttons and started the machine. And every day I ran and ran and ran. Gradually he increased my speed and length as my stamina increased and my frequency at the McDonald’s drive-through decreased. I was losing weight, and my body began to feel good again. I was sleeping well, eating well, and looked great in my clothes. I was clear headed and cheerful and my work improved. Every day he met me at that treadmill and every day he stood there throughout my work out.

Those early days were hard and painful and he never stopped encouraging me. He told me repeatedly that I was doing well, that I could do this. He kept telling me that I would one day end up thin and healthy. And I kept telling him that he would one day end up fired if he did not stop this machine and order take-out immediately. But he persisted and because he persisted so too did I.

Months later I was thin again. My fitness trainer, whom I hated at first for making me do what I said I wanted to do, never left my side. I wanted to quit so often. But he coached me, encouraged me, cajoled me, and by his presence, got me to do what we both knew was good for me. He helped me do the hard work of getting right with my body and my health.

Similarly, a good church fundraiser – lay or ordained - is just that…a coach! Like my fitness instructor, you help the people of your church to do a hard, counter-cultural thing. Your congregants may be angry with you and your team at first for kicking up all this dust about money in church. They may resent you ramping up the rhetoric about giving. They may hate the new things you are doing to move from a wimpy rector’s stewardship letter to a full campaign. They might get tired and want to quit all this talk of money in church. Some will even leave the church (though they are using stewardship as an excuse!) And just as I was short-tempered with my fitness instructor when he increased the speed of my treadmill, your congregants may be short-tempered with you as you move from a flaccid budget-centered stewardship season to a strong, healthy, vibrant conversation about money, giving, standards of living, choice-making, rule of life, and all the many other things which go into a robust stewardship campaign.

They will start giving more and more as you do better work in asking for money, telling the church’s story, and thanking people for giving. They will start out saying what most people say, “I am already giving as much as I can!” because at the time they truly believe that (and for a very few it is true!) But over time, as you get better and better at presence-making around giving and as they become better and better at seeing their own bounty – things will change and a new spiritual health will begin to dawn.

And remember that my weight loss affected not only my heart and my waistline but also transformed many other connected parts of my life – my sleep, my work, my play, my relationships, my energy levels. And similarly, when your congregation begins the process of transformation that is inherent in solid spiritual teaching and effective leadership in fundraising – then your congregants will be as transformed as Ebenezer Scrooge was on Christmas morning. And not only will they, as stewards be transformed – but also your resources for your church’s mission will be transformed, sending the smiles out in rings around your church like the rings of a stone tossed in a pool.

That fitness trainer did only one thing. He stood there. He waited with me just like Mary and John waited with Jesus on the cross. He told me I could do it when I thought I could not. He told me I could go one more mile when I was sure I could not. When I missed a day – he stood there…waiting…and word got back to me that while I was falling off the food wagon at McDonalds, he was waiting for me at that empty treadmill. I never missed another treadmill session. It was hard work and transforming work and so often I wanted to quit. But his presence making made the difference for me.

And when things get really hard and you despair – and you will – then remember Mary and John at the cross and ask Jesus for the strength to do for your congregation what Mary and John did for him.

[This article was originally published as a blog on the TENS website and is reprinted with permission. It has been shortened and edited for ECF Vital Practices.]

Charles D. LaFond is canon for congregational life in the Episcopal Diocese of New Hampshire and a TENS board member. His current ministry combines 25 years as a fundraiser and nonprofit management executive and a decade as a priest and monk.
Read more about Charles here. 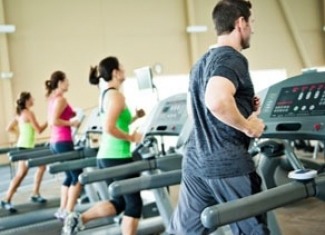