May 2013
Leadership in a Time of Crisis

Here I sit, watching as the last of the rain drips slowly from the gutters on the roof. The sunlight has begun to filter through the grey clouds that are lifting. Another half hour and the tornado watch will be over—looks like the storm will pass us by -- this time.

But I find my mind wondering back about a year ago when the tornadoes tore through Arlington [Texas] and I watched as on the news one after another of the neighborhoods where the people in my congregation live were visited by those twisting clouds of destruction. My eyes were filled with tears and I fell to my knees in prayer, “Lord protect your children. Save them from the Storm.”

As the initial shock wore off there was only one thing on my mind—was anybody hurt? Was everyone ok?

I contacted my husband: He and my children were safe—a little rattled from the storm drill at school but no damage there. Next I tried to reach the families with young children, and the elderly parishioners who live alone—two places where fear might take its greatest toll. Some were all right—others were not answering their phones.

There were 90 households to reach - too many people for me to call in a timely way. Then it dawned on me: I could ask the St. Alban’s vestry to help. I had a parish directory stored on my phone. I quickly divided it into nine sections and sent emails out to each vestry member with instructions:

“Keep working to reach these people until you know how they are. Then report back your findings. If there are those we have not reached within 24 hours, we’ll take other measures.”

I called the chair of our lay pastoral care team and shared my plan. Although she was in her home’s tornado shelter as the alarms were still sounding, she had reached her husband by phone and knew he was okay, so she started to call the members of the congregation who are elderly and I finished the calls to the young families. Everyone was okay.

Within nine hours we knew that all our regular parishioners were safe. By morning we had heard back from even our fringe members. Out of 152 members, no one was injured. No homes had taken damage. One car was touched—but nothing significant. All was well…

Next Steps
Now able to breathe and think again my mind began to clear. People in our congregation had been spared…how might we reach out to others who might need our help? Within 24 hours a letter was sent to all parishioners sharing that everyone was all right—and asking how we might serve the community around us that was hurting.

The next day I visited what was left of Arlington’s Methodist Church. It was Holy Week and they no longer had a building to worship in. St. Alban’s has no space to offer: We worship in the Theater Arlington– our congregation would almost fill all the seats on Easter morning—and then it would be time for the theater’s afternoon matinee.

Knowing what it is like to lose a building (we lost ours during the schism in the Episcopal Diocese of Fort Worth), I wanted to offer what support I could. Visiting with some Methodist leaders at their site, I learned they would hold their board meeting at Applebee’s that night. The nearby high school was letting them use the cafeteria for Sundays. But Easter Sunrise service would be on the church lawn.

I remembered our own beginning staff meetings at the Blue Cow Diner, pastoral visitations at Starbucks, and committees and Bible studies meeting in people’s homes.

Looking across the parking lot, I recognized another Methodist pastor, a friend of mine from across town. She is a trained UMCOR volunteer –the disaster branch of the Methodist church-- and she was there in her baseball cap and work gloves moving debris off the driving paths to make way for the work vehicles to move around.

She was beaming as we greeted on another. “Guess what I just learned?” she said, “the youth from this church have put out a call to the entire church to show up on Saturday here at the church parking lot in jeans and work boots, with shovels and work gloves in hand with this message: ‘We’re going into the neighborhoods around the church to help the families whose houses were destroyed by these storms.’”

And my heart melted, and I wept with my friend as I remembered that this is also how we had survived our own storm just a few years before.

Our Story
When the storms of dissension that had been brewing in our diocese for so long finally erupted in a schism that tore our church apart--we gathered with others and we took the challenge of our Presiding Bishop to heart when she said, “do not turn your focus inward at the pain you have borne. It will tear you apart. Turn instead your focus outward to the world around and help to heal a hurting world.”

And so at St. Alban’s we opened our eyes to see who it was that was in need nearby. We adopted this mission statement: “We are called to be the hands of the Lord in this place, open to all, reaching out to the community and the world.” We looked for ways to serve in a low-income elementary school, at the nearby homeless shelter, and at the local food pantries. And we committed at least 10% of our pledged income to go towards outreach projects—that way even if times were lean we would always be able to give.

Four years later, we still have no building, but our congregation has grown, our budget has grown, and our outreach ministries have grown with it. Outreach is still the heart of our parish, and now that we have children and youth, we are exploring ways to pass that vision on to them—or in reality to be inspired anew by their own generous hearts, as we seek to serve a hurting world together.

As I pulled out of the driveway of the Methodist Church that day, I saw a handwritten sign on a large piece of cardboard that I had missed when I first came in.

“The Building may be down, but the Church is still standing!”

And I found my heart spontaneously responding,

Summary of our Response to Crisis?

But, what about the buildings? One day we may be called to care for a building again—but for now, we’ve got our hands full just caring for the church, and the world. Melanie Barnett Wright is the Priest in Charge of St. Alban's Episcopal Church in the Diocese of Fort Worth, Texas, a congregation that has been meeting in the Theater Arlington since the split in 2008. Visit their Facebook page to learn more about this vibrant congregation. 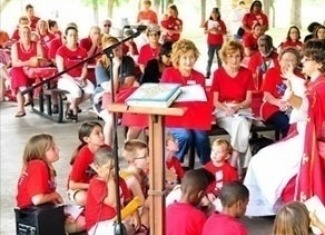