I expect the St. James neighborhood is similar to many urban neighborhoods across the United States. Walking the streets, I see and hear a rich mix of language and culture; at St. James we see and hear this same richness within our church.

As congregations learn more about their neighborhoods – and their neighbors, we find many of the commonly used labels to describe places of origin do little to help us understand the hundreds of cultures that might be part of the area.

One of the questions that should be asked when church members talk about Latino ministries is ‘who are the Latinos I am working with?,’ or the deeper question: ‘who are Latinos?’ It may seem an irrelevant question for some but sometimes people use the prism of ‘us’ and ‘them’ to qualify the ‘other’. The United States of America has a wide diversity of ethnicities and races yet many use the term ‘American’ when referring to people who are Caucasian or with lighter skin color, fluent English speakers, and people with European Protestant roots. Looking back to the historical formation of the country the panorama is an amalgam of cultures coming together in the same geographical area.[1]

Who are Latinos?
In 2010 I interviewed Christians from the Episcopal and Roman Catholic Church who are working with Latino populations in the U.S., as well as Latinos and Latinas from the first, second, and third generations in this country. With ignorance of what Latino means one of the topics raised by many of the people interviewed, it became clear there’s a need to widen the understanding of the term Latino and provide resources to help non-Latinos learn more about this diverse group of people.

The French coined the term Latin America around 1860 when Napoleon III was establishing an alliance with Mexico. The term Latin could strengthen the identity of the nations in the New World where Spanish, French, and Portuguese had settled.[2] The emperor of France saw their shared linguistic roots as a common ground to bring allies together and at the same time isolate the Anglo-Saxon colonies.

Diversity
From that period on Latin America was used to refer to a huge geographical extension of nations with different and distinct cultures. It is a large area of incredible ethnic complexity.

In Mexico, a majority of the population is descended from indigenous people and the Spanish who colonized Mexico. Culturally, the Mexican celebration of the Day of the Dead – with its candy skulls inviting people to eat their own death – embodies a practice unfamiliar to people from the United States precisely because its intimate inspirations are largely non-Western.

Argentineans living in Buenos Aires are ethnically more European than residents of Washington, D.C. Not only does a larger percentage of the population descend exclusively from European immigrants, but they also maintain more European contacts, such as dual Argentine-Spanish citizenship and relatives born or still living in Italy or England. And, the modern cityscape of Buenos Aires is very self-consciously modeled on Paris, and French movies have a popularity there unheard of in the United States.”[3]

Shared Identity
Brazilian scholars Leandro Narloch and Duda Teixeira raise the question: “What is in common between Amazon River’s people, Argentinean cowboys, businessmen in Mexico City, indigenous people from the islands in the Titicaca River, and voodoo followers in Haiti?”[4] Their answer shows that Latino is not only the Hispano from Central America but also a broader understanding of the term beyond language settings. What defines the Latin American identity today is not the Latin roots but history written through recent generations. Latin American countries share similarities such as mourning the tragedies suffered by indigenous peoples during colonization, people who were subjected to slavery, as well as the experience of oppressive dictatorships. Latin Americans also use local culture as a model of resistance against globalization and often bring up discourse against capitalism.

Latinos/as in the US
But who are the Latinos and Latinas living in the United States? For many years society, even the church, worked with Spanish speaking groups with the understanding that this is the group to whom Latino Ministries must be addressed. But in fact, as noted above, language cannot be the only determinant to identify the Latino population. Besides Spanish they speak Portuguese, French, English, and several other Indigenous languages. They are also people born in this country, Latinos and Latinas of the second and third generation who sometimes do not speak the language of their grandparents or who chose one or the other.

The church needs to switch the lenses used to look at the United States population and then address the needs of Latinos according their own peculiarities. There have been Brazilian families in Massachusetts since the end of the 19th century and even now, there are people who keep calling their descendants the Brazilians.

Across the United States there are cities including Los Angeles, New York City, and Miami where there are more people of Mexican, Puerto Rican, or Cuban origin than there are in all but the largest cities in Mexico, Puerto Rico, or Cuba. Together, Hispanic Americans comprise nine percent of the total American population, making them the country’s second largest ethnic minority. If present trends continue, Hispanics may become the largest American ethnic minority sometime in the 21st century, surpassing African Americans.[5]

Moving Past Fear
The fear of change coming from the outside is often what stops congregations from more fully embracing ethnic minorities. Most of the interviews I conducted revealed that Episcopalians have their identity rooted in the worship pattern expressed in the 1979 Book of Common Prayer.

Opening the doors to ‘others’ means that the way ‘we’ have of doing things may change because outsiders may not worship in the same way ‘we’ do on Sunday morning. For Latin Americans living in the United States there are many other ways of worshipping and serving God’s mission. These include the Quinceñaras, the traditions for The Day of the Dead, patronal feasts, and devotions to the saints.

Looking back to our early Christian roots, we are reminded that the nature of the Early Church abides in the diversity of cultures and languages. Pentecost marks the definitive event of becoming a Christian community: It is our duty to celebrate the differences that compose the body of the church. The challenge is to know how to live the diversity without losing the particularities. Fear of the unknown and of the stranger many times prevent the church from experiencing the Grace of God.

The Power of Stories
Sharing our stories – telling and listening – helps break down the walls that divide people in the church. Making people’s stories relevant for the healing and reconciliation of the Body of Christ is a powerful instrument for evangelism.

The expected result of sharing the stories of many Latinos and church leaders who are working with Latino Ministries in The Episcopal Church is that local communities will be able to enter the dialogue about multiculturalism and become more culturally sensitive in their congregations. The first step to break the walls of division and ignorance is to be open to listening to stories without seeking much clarification. How do these stories relate to the local context? What can the local church learn from those stories and how can they be transformed by the Holy Spirit to prophesize in dry places that need God’s Grace.

[1] Lewis Killian, The Impossible Revolution, Phase 2 (New York: Random House, 1975), 16. “The white Anglo-Saxon-Protestant remains the typical American, the model to which other Americans are expected and encouraged to conform”

Sam Dessórdi Leite is a priest from the Episcopal Anglican Church of Brazil currently serving as rector of St. James Episcopal Church in Oakland, California. An ECF Fellow, he is also working on his Doctor of Ministry (DMin) degree at the Church Divinity School of the Pacific. Sam’s focus is on issues in Latino Ministries for The Episcopal Church’s United States based dioceses. His current research is designed to identify ways to empower Latino Ministries that will help the Church engage in a true dialogue with the Latin American population. Sam has been very active on the provincial level with the church in Brazil, particularly in Christian formation, youth ministry, and liturgy. He is the Custodian of the Brazilian Book of Common Prayer and is Assistant Dean of Holy Trinity National Cathedral, Porto Alegre. Sam also served as Chairman of the National Worship Committee of the 9th Assembly of the World Council of Churches in 2005-2006. 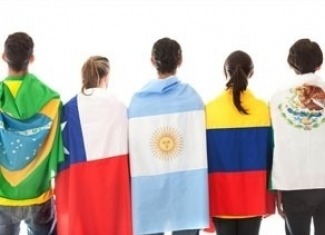