God Helps Us to See

When I was ordained an Episcopal priest, the community I was serving, St. Paul’s Episcopal Church in Waco, Texas, gave me a beautiful portable communion set. The small silver chalice, paten, host box, and glass cruet were all contained in a shiny mahogany case. I placed it in a visible spot in my office, where I could admire it. When I made pastoral visits to those who were homebound or at a nursing home, I proudly carried it, being careful not to get any scratches or dents on it. When I returned to my office, I would place it in that special spot, dust and shine it, and then sit back to admire it.

Years later, I was serving as the interim priest at Iglesia Episcopal San Francisco de Asís in Austin, Texas, about 30 miles south from Manor (pronounced “maynor”) where I had been sent to plant a church, At San Francisco de Asís I officiated at many weddings, baptisms, and quinceañeras. Late one Friday afternoon, a woman stopped by the church’s office, and frantically asked me if I could officiate her daughter’s quinceañera on Saturday (the next day!) at her home in a town south of Austin (even further from Manor!). She wanted her daughter to have a special blessing on her special day. I had a wedding and another quinceañera scheduled for Saturday, but in between my excuses, she insisted. So I irritably agreed, with a priestly smile of course.

That Saturday morning I decided that the easiest way to have Holy Communion at the quinceañera was to use my portable communion set. I grabbed it from the special spot in my home office where it sat as shiny and new looking as on the day I received it.

Walking from my car to the church office at San Francisco de Asís, my Libro de Oración Común under one arm, my vestments under the other, I felt my communion set slip from my hand. Everything seemed to go in slow motion: I saw the shiny mahogany case hit the hard parking lot surface, the hinges fall off, and chalice, paten, and cruet fly out. I couldn’t believe it! Amazingly, the glass cruet didn’t break, and the chalice and paten didn’t get too many scratches. Nevertheless, I was crushed. After the wedding and quinceañera at the church later that afternoon, I walked angrily to my car to drive to the woman’s house for the other quinceañera. It was a hot Texas summer day and I was sweating. “They better appreciate that I’m going through all this trouble to do this quinceañera!” I murmured under my breath.

As I maneuvered the maze like streets in an isolated trailer park, I saw colorful balloons in the distance. As I got closer I could see chairs, and a table set up to be the altar. Something happened to me at that moment; my heart was broken. I thought I was bringing the goods, the shiny things, the holy things, but it was this family who welcomed me with the Good News of that God who “so loved the world that he gave his only Son, so that everyone who believes in him may not perish but may have eternal life” (John 3:16). I realized that my anger for the broken communion set didn’t make any sense. I realized it had to be broken in order that I may share it, and the shiny things in it, freely. I realized that I had to be broken in order to share the Good News, and the shiny things that we as a church have, freely.

Why am I telling you this story? I’m telling you this story because it is foundational to the work that we are doing, and the culture and atmosphere that we have established at St. Mary Magdalene Episcopal Church in Manor, Texas (SMM). We understand that we are called to share those “shiny” things with all, to share what we have received from God’s generosity with all, no strings attached.

The majority of the people who met in my house in early 2010 when we began SMM had not attended a church service on a regular basis or at all. Most had rough backgrounds. We met in my living room, and the coffee table became the altar. The children would be attracted to the shiny things on the “altar” and often would reach to touch them, to open them. The parents would freak out, but I assured them that it was okay. It gave me the opportunity to teach what these shiny things were and that they were freely available to them, and that God is an approachable and generous God.

In August 2010 this group of Latinos/Hispanics (and my wife, Thi, who was born in Vietnam), the majority being first generation Latinos/Hispanics, and some who were undocumented, found ourselves setting up equipment in the cafeteria of the Manor High School, preparing the space to share the Good News we had received from God with the surrounding community. For seven months we gathered in my house, training our ears to the sound of a service where the liturgy, music, and sermon was done in both English and Spanish. For many in the group this was the first experience of this kind and it was uncomfortable. However, God’s generosity had broken us and we knew that adjustments had to be made to what we were accustomed in order that the Good News, and the Church’s shiny things, be made available to more people than just us.

It was this same brokenness that a couple years later pushed what was becoming a diverse community of SMM to set up and take down equipment, tents, tables, and chairs in a local park every day for a week for our Vacation Bible School. They endured the brutal Texas late afternoon July heat because they wanted to share what they had received, the Good News of God’s generosity. Let me remind you that these were people who did not attend church before. Even today, approximately 88% of those who have become part of the SMM community, did not attend church before, or had stopped attending for several years.

It was interesting that when we moved to our new church in December 2014, after meeting at the Manor High School cafeteria for four and a half years, people who had in the past been part of churches put on their “churchy” hats, which they had not worn while we met at the school. For them, it seemed that the atmosphere and culture that we had established at the school did not match our new surroundings. These members asked for changes such as a new dress code, a change in service times, what they believed to be proper for a consecrated church building.

These requests provided an opportunity to remind the entire congregation that SMM had been planted by people who did not attend church services and were not part of a faith community before, and who in the past had felt judged and not welcomed at church, that they were not good enough to have access to the “shiny” things. And, that it was important to remember that it is our shared brokenness – rather than what we wear, when we meet, or someone’s expectation of what is “proper”– that brings us closer to God.

Now that we have more “shiny” things (a beautiful church building, and offices and classrooms, which sit on a hill in a 23-acre property) which we have received from a God who is generous, we have an opportunity to share it all with all and announce, just like Mary Magdalene announced to Jesus’ disciples, “‘I have seen the Lord’”(John 20:18).

Alex Montes-Vela is the founding pastor of a multiethnic and bilingual community, St. Mary Magdalene Episcopal Church in Manor, Texas (a suburb northeast of Austin), which began in his home. After meeting at the Manor High School cafeteria for four and a half years, St. Mary Magdalene, a majority of whose congregants were new to any faith community, recently moved to its own campus. Alex is married to Thi, and they have three adult children: Thanh (a high school band director), Alissa (a middle school math teacher) and Laurita (a junior at the University of Texas). 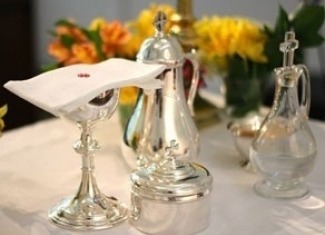