Buried among the hundreds of resolution at the recently concluded General Convention in Salt Lake City, and hidden in the line items of the The Episcopal Church’s budget was a modest amount of money set aside to promote stewardship across the church. Initially there was no money in the budget for stewardship, but at the last moment a symbolic amount was put in.

Several General Conventions ago, both the House of Deputies and House of Bishops gave overwhelming support to the following statement: “stewardship is the main work of the church.” And at every General Convention since, stewardship has been highlighted as fundamental to the ministry of the church. Something to that effect was memorialized at this Convention, but it was lost among all the other resolutions and activities that commanded more attention.

I believe that stewardship is indeed the main work of the church. Stewardship is all we do with all we have all the time. At its heart, stewardship is paying close attention to the gifts God has given us – and being clear as to how we invest those gifts with our time, our talent, and our money.

Stewardship was sidelined at this General Convention. Of all the prepared questions directed to the nominees for presiding bishop at an open forum, none were about stewardship. There was a daily Eucharist, but at first no provision was made for an offering to be taken and brought to the altar to be blessed (as required in the Prayer Book on page 361).

Stewardship nearly got lost at General Convention. It nearly gets lost in our own lives. There are other pressing matters to attend to. Momentous decisions to be made – and mundane tasks that often crowd out everything else.

Years ago I attended a church in another denomination in Memphis, Tennessee. Somewhere in the middle of the service, the pastor announced, “It’s offering time!” The entire congregation stood up and cheered. It was a moment in which the community could express their gratitude, and they did so eagerly. When I returned to my Massachusetts congregation I told the story of the Memphis church’s response to the offertory, and then I declared, “It’s offering time!” There was some outpouring of excitement, although I couldn’t really tell how much of it was genuine and how much was an attempt to humor me. I tried it again the next week, and it was clear from the silence – and some groans – that what plays in Memphis doesn’t have traction in a New England Episcopal Church. A key lay leader told me gently, graciously – and clearly, “it’s offering time!” needed a permanent rest. She said it felt like a gimmick.

“It’s offering time” may come across as a gimmick, but the impetus for it, the source of it – which is gratitude – is not. My reading of the Gospel tells me that gratitude needs to come first. In reality, resentment, disappointment, and distraction usually knock gratitude way down on the priority list. As people of faith, we are invited to discipline ourselves to express our gratitude at every opportunity: in the morning, at noontime, at the end of the day. We are challenged to figure out how we can express our gratitude, by saying and living “thank you,” by sitting at the kitchen table and figuring out how, and how much of, our money we want to give in gratitude.

The Bible says a tithe. The church has repeatedly said a tithe is good start. What happens in the moments of anxiety in congregations, usually around budget time, is that stewardship morphs from people’s need to give into the church’s need to receive. Gratitude gets trumped by obligation. And our giving devolves into an exercise of what we think we can afford, rather than opportunity to discover deeper gratitude and generosity.

My hope and prayer – for myself and the rest of us – is that we will take time this fall to take time and provide space to claim the gifts given us by God and consider how best to use those gifts to do God’s work in the world. Provide some space and time for this work at a vestry meeting. Provide some time and space for this work on your own time.

How we exercise our stewardship and how we allow ourselves to be drawn into the gift of gratitude, determines how we participate in healing the world. It takes some work. It is primary work. It’s the main work of the church. It takes time, and prayer. Stewardship can’t get lost; it needs to be brought from the sideline into the center of our souls and minds – so it can be the main work of our faith-driven lives.

Try This
In “Creating a Culture of Giving,” Angela Emerson offers congregational leaders a step-by-step process for crafting an annual stewardship statement to help guide their congregation towards realization of their mission and vision. This three part statement, considers: 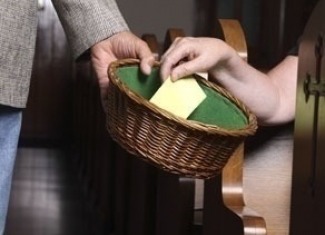