“Thriving churches focus on transformation of life – the personal journey of faith – and on mission[s] in the community.”
Tom Ehrich

Good things are happening at St. Paul’s Episcopal Church in Bellingham, Washington. Their church family is growing. Their children’s ministry is growing. As are their adult formation programs. And, as the church has grown, so have opportunities to bring Christ into the local community.

Better still, church members know about these ministries, thanks in large part to lay leaders willing to lay the foundation for, and do the initial work of collecting what they call “some of God’s bountiful blessings” that result from a life of stewardship. At St. Paul’s, stewardship is a journey, it’s about life, and it is seen as the way to God.

These good things didn’t just happen. They’ve been part of an intentional process of rebuilding following a split in the congregation seven years ago. The story is a familiar one: Differences over Episcopal theology led to the then priest and a number of parishioners electing to leave. What was different was there was no fight over the church building. Friendships and bonds of affection remained between former and continuing members. And, Charles Whitmore, the assisting priest continued in his role, providing a calm and non-anxious presence for the remaining members and preparing them for new clergy leadership.

Kathy Mintz, a newer member of the church, who serves on the vestry and finance committee, describes the split as “a crack that allowed for new growth.” With that growth came many, like Kathy, who were from a different – or no previous – faith tradition. In California, Kathy’s home prior to her move north, she worshipped at a Christian Missionary Alliance church in Los Angeles. When she couldn’t find a similar church home in Bellingham, she began to look for another. St. Paul’s came the closest to what she left behind.

“The first year I was at St. Paul’s I attended their ‘generations of generosity’ stewardship event,” Kathy recalled. “It was their use of scripture that let me know that these were a people who were serious about their lives of stewardship.”

How did this come about?

Following the split, the Episcopal Diocese of Olympia sent priest Jonathan Weldon, to guide the congregation in their search for a new rector. They later called him as their priest.
Grounded in the belief that the Church is renewed when all of its members recognize that they are commissioned for compassionate ministry in Christ’s name through the vows of Holy Baptism, Fr. Jonathan believes the work of the clergy is to support those ministries. With members of the St. Paul’s community in need of healing, Fr. Jonathan and Fr. Chuck set out to rebuild a transformative church, offering support and guidance to members committed to strengthening their faith and supporting each other on our spiritual journeys.

This approach might best be described by St Paul’s mission statement:

“Gathered by the Holy Spirit, we worship God and, transformed by Christ’s love, we go forth into the world to love and serve with joy.”

As the church was experiencing growth and a new vitality, it was also facing challenges related to this growth as well as financial support for its ministries. Many of the newer members were from different faith traditions and unfamiliar with the Episcopal practice of tithing and an annual pledge campaign.

Recognizing the need to consider and reflect on these challenges, the vestry invited Andrea McMillin, a priest then serving on the diocesan team of congregational development consultants to work with them during their 2014 retreat. Conversation centered on visioning related to what St. Paul’s could be and what was holding it back. Three areas of focus emerged: welcome, accountability, and effective communication.

Building on their commitment to effective communication, for the 2014 pledge campaign, the vestry identified three specific ways funds raised from pledges would be used. This information became a centerpiece of campaign messaging, from letters to messages from the pulpit. It worked. Pledges increased.

Building on the belief the annual appeal would be strengthened by adopting a narrative budget, Fr. Jonathan introduced this approach to the finance committee in the summer of 2015. Their silence spoke volumes.

At the next month’s meeting, Fr. Jonathan tried again, this time offering a detailed example. He also shared his idea and the example with the vestry, stressing the advantages of using a more descriptive process to help people see their pledge dollars at work.

As Kathy recalls, the message was “If we want transformative lives, we need to talk about the transformational aspects of growth.” And the way members' pledges support this work. She volunteered to help.

Guided by Fr. Chuck’s vision of a detailed ‘state of the church’ report showing not only how funds were used but also all of the various ministries taking placed, an approach began to take shape. Central to this process was finding a way to show these ministries, to connect giving with the blessings that result from a life of stewardship.

Presenting this information as a narrative story rather than a narrative budget, sprung from a conversation Kathy had with diocesan canon for stewardship and development, Lance Ousley. “He introduced me to the posters All Saints Episcopal Church in Pasadena created for their congregation’s ‘Your Pledge Dollars at Work’ campaign and also shared samples of a similar approach used by a Congregational church in South Carolina.”

Parish webmaster Ron Weitnauer soon joined Kathy and Fr. Chuck in this ministry, bringing his expertise in communications and marketing.

The biggest hurdle in this process was collecting the data or what Kathy describes as ‘God’s bountiful blessings.’ Recognizing the value of inviting all of the ministry leaders into this process, Fr. Jonathan and Fr. Chuck extended a written invitation, inviting them to join this journey of discovering and sharing the many ways St. Paul’s was engaged in transformation both within and outside of the church’s walls.

Kathy visited each ministry group and described the process of collecting data related to the work of a particular group. There were many questions and some resistance. And then, transformation began to take place within these ministry groups. Members began to think about their ministry’s role, discussing their purpose, thinking about or naming objectives, evaluating ‘why’ they approached their ministry in a certain way, and in some groups, making changes as a result of this self evaluation.

As Kathy was collecting data, Ron began to think about how to present it visually. “You can’t assume that the parish knows what is going on. We have grown quickly, and outside of a few dozen very active members, most simply do not know.”

His solution? “As you know, the first thing Episcopalians ask each other is ‘what service do you go to?’ So, I went to the 7:45 am service, which is a lot of our older parishioners, and asked around. Nobody knew that in the middle of the 10:30 service 25-30 little kids come streaming down the aisle from the Godly Play classes. A few years ago there were less than 10 kids in the program. We cancelled Vacation Bible School five (?) years ago due to lack of interest. This year we had to cut off registration at around 100 kids! So this is only one example of joyous news, and very inspiring to all. Time to get the word out.”

Working with the posters from All Saints Pasadena, as well as the collected data, the team decided to organize it around the themes of connect, inspire, transform, and send with a fifth category, supporting the ministries (buildings, grounds, staff, and clergy). As Kathy fed him the data, Ron worked to group it all into the five categories. “Then it was just grind it out and go back and forth (with Kathy and Fr. Chuck) on creating the graphics, wording, proofing, and publishing,” shared Ron. “Fr. Chuck challenged us to turn it into some large poster boards which were set up on easels around the Great Hall for a month or so.”

The finished posters were a visible symbol of the many ways the people of St. Paul’s were joining together in faithfulness and obedience to use their time, talents, and treasure to seek and serve God.

The posters (also offered as a printed handout and turned into a PowerPoint presentation for the annual meeting) served as a foundation for the other elements of St. Paul’s annual pledge drive: letters targeting three different groups of parishioners and messages from the pulpit. They also served a different purpose: providing joy as people gathered to view and share ‘aha’ and ‘I didn’t know’ moments as well as the sense of accomplishment and pride at the depth and breadth of their combined gifts of time, talent, and treasure.

Towards the end of 2015, there was some anxiety related to the number of pledges received and concern about not meeting budget projections. By the end of January 2016, they had received 110% of pledges, representing $7,000 more than the year before. With the approach of fall 2016, Ron shares, “I was talking with Fr. Chuck yesterday during coffee hour. Pledges are again up around 20% for this year. He had an absolute twinkle in his eye. Very cool.”

“God is faithful beyond what we can ask or think,” said Kathy, “God is honoring our faith, sometimes with money.”

Nancy Davidge is ECF associate program director, editor of ECF Vital Practices, and editor of the recently revised Vestry Resource Guide. A long-time member of Episcopal Communicators, and recipient of numerous Polly Bond Awards of Excellence, she also served on their board and as president.

Wondering if adopting a practice of sharing a narrative budget or story illustrating the impact of your church’s many ministries on parishioners as well as members of the wider community might make a difference in your annual or other fundraising campaign? As a first step, perhaps your vestry, finance, or stewardship committee might take a closer look at St. Paul’s 2015 annual report posters and/or the ones from All Saints Pasadena to become familiar with the ministries each chose to represent. Notice that while St. Paul’s adopted some of the All Saints language, they took the idea and adapted it to reflect their ministries.

Individually and as a group, reflect on what your leadership team might learn from, adopt, or modify from this approach. 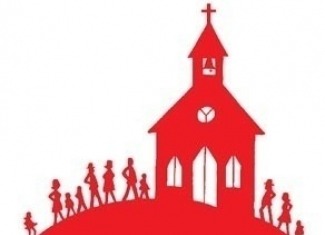