The Vestry Goes on Retreat

The vestry retreat is coming and so much is at stake in those few hours that have been carved into busy schedules to talk in an intentional and focused way about the business of the church. For weeks, in meetings and in hallways, clergy and vestry members alike have been saying, “well, we’ll talk about it at the vestry retreat,” and now the agenda for the retreat has ballooned into something unmanageable. It’s a common problem.

In educational program design work, which is a significant part of my responsibility at Duke Divinity School, we often say that the first rule of design is less is more. A day with four sessions will often prove more beneficial, formationally-speaking, than a day with twice that many sessions lasting twice as long, regardless of how good those sessions are. When there is space to breathe, people show up in a different, more life-giving, way. They find the room to absorb content and integrate it into their daily lives.

The same is true for a vestry retreat: Less is more.

So, my suggestion is that, in a vestry meeting prior to the retreat, you spend some time discussing everything that could be discussed at the vestry retreat and collectively decide the top two or three priorities for the retreat. The question for discernment here is: of all that could be discussed during the time, what is most important for the life and health of the congregation at this particular time in its history? While there may be additional smaller matters that can be cared for around the edges of the retreat, you will want the majority of the retreat’s time to focus on these large and specific topics that deserve two or more hours of consideration each.

Depending upon what the vestry chooses as its top priorities for the retreat time, it may be necessary or advisable to engage an outside facilitator to lead your retreat. If the priorities identified are particularly complex, controversial, or if “sides” have already formed in regard to the questions at hand, then it is generally helpful to engage an outside voice to carry the responsibility for the retreat. Outside facilitators can design an arc of retreat so that, if or when conflict arises, it does so in generative ways for the future of the congregation. Additionally, a good outside facilitator will prompt a vestry to wrestle with the difficult questions that they would prefer not to engage. An outside facilitator can also often provide content that can shape conversation and imagination for future work.

Outside facilitators, though, often cost a considerable amount, and so, the leadership of your vestry may decide not to engage a facilitator. If you choose not to, here are a few observations from my experience of leading vestries that can help you make the most of the investment of time, money, and energy that is a retreat.

First, I have learned from work with the Center for Courage & Renewal that, to make a vestry retreat a most generative time, it must be a safe and charged space. In other words, the retreat must balance my personal feeling that I can say what I need to say about the status and health of the church and the issues before it with my feeling of discomfort at being pushed by the opinions and ideas of others. When this balance is struck properly, people find that they are asked to engage meaningful, not mundane, questions, and the retreat time proves worthy of the investment of my time.

Second, attention needs to be paid to what might be called the arc of a retreat. How, in what order, and for how much time, should topics be addressed? As you think about the retreat, can you sense a logical flow to the agenda so that topics come at the times that are most beneficial for the discussion that will follow? There are a variety of “logics” that can be employed during a retreat. My personal favorite is to build the retreat this way: a survey of the past year for the congregation set against deeper trends in the congregation’s life, followed by a deep exploration of the current conditions of the congregation, ending with a lengthy conversation about the future of the congregation in the year and years ahead. Another possible flow is to consider which issues will generate the most lively – or divisive – conversation and schedule those discussions for the middle of the retreat with the most time, so that the simpler matters are cared for at the beginning and the end. This allows for early consensus and a closing consensus thus sustaining relationships that may be pushed or strained during tense discussion.

Third, my goal for any vestry retreat is that every member of the vestry has been able to say what he or she needs to say and feels that he or she has been heard. This is a different goal than the usual “we’ll write a strategic plan” or “we’ll design the capital campaign,” but this goal is a forward-looking one that sees the real point of a vestry retreat as building the relationships necessary for future collaborative work by investing every member of the vestry in a common vision of the future.

Finally, a good vestry retreat, frankly, is one that doesn’t feel like a one-day or two-day vestry meeting. If the retreat leaves people feeling that way, a good opportunity for a constructive time has been squandered. To prevent that, it’s necessary that the agenda isn’t just business but more expansive to include time for spiritual development, personal renewal, and team-building. Those elements are not ancillary to the point of the retreat; in any design, they should be at the heart of the retreat time. That is the work that ninety minutes on a Tuesday night once a month often precludes, and it is work worth doing.

Vestry retreats are considerable investments – of time, of money, of energy. Plan the retreat so that the return on those investments will be months of constructive, collaborative effort for the sake of the very witness of the congregation in the world.

Nathan E. Kirkpatrick is the managing director of Alban at Duke Divinity School in Durham, N.C. In this role, he designs educational programs, facilitates leadership development opportunities for clergy, denominational and institutional leaders, works with publisher Rowman & Littlefield to publish Alban books, and consults with senior church leaders around the United States and abroad. He has degrees from Wake Forest University and Duke University Divinity School and is a doctoral candidate at the University of Durham in Durham, U.K., studying trends and patterns in clergy formation. He was ordained to the Sacred Order of Priests in the Episcopal Church on Dec. 20, 2015, and serves as assistant to the rector at Church of the Advocate in Chapel Hill, NC.


Don't miss an issue of Vestry Papers! Sign up for your free subscription here. 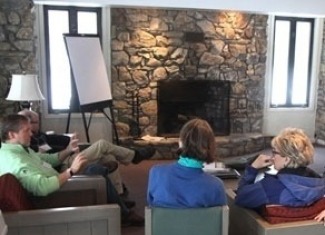