Sustainability in the Scrappy Church

Seminary can prepare you for many things but it will not prepare you to be a plumber, electrician, landlord, and/or handywomen. Serving as the priest-in-charge of Trinity Church, Los Angeles, I quickly realized I needed to be a “jack-of-all-trades” if I was to put out all the fires that arise when serving a scrappy church.

What is a scrappy church?

I often describe scrappy churches as those that sound like the emergency room at the county hospital: chaotic, loud and messy, with too much suffering and unmet needs and not enough nurses or doctors to tend to all the “patients” seeking help. The buildings often look like they have been abandoned. Everywhere you turn you see broken doors, rotten wood, bursting pipes, and falling roofs. And yet there is a certain magic to scrappy churches.

Anna Olson, rector of St. Mary’s Church, Los Angeles and former priest-in-charge of Trinity Church, describes scrappy churches as churches that survive and do ministry in contexts where models developed for middle class and affluent communities do not apply or make sense. Scrappy churches are frequently in communities where the neighbors are struggling to meet basic needs. They are usually found in gritty places, and can never hope to compete for the affections of well-heeled church shoppers looking for safety, convenience, program choices and smoothly run services.

Survival of the scrappy

Scrappy churches make creative use of the resources at their disposal, and engage the leadership of their local communities. For example, at Trinity we made a real effort to build relationships with our neighbors. This meant inviting them over for conversations on issues that affected both them and the church. After a couple of conversations, the neighbors realized that “church staff” meant a part-time priest and a part-time parish administrator. With so many needs and not enough people, many things fell through the cracks. One such thing was building and grounds. When our neighbors found out that the church was struggling to keep its campus clean, they took it upon themselves to organize monthly street and church cleanings. The neighborhood co-op paid for a gardener to service the church monthly and they bought paint to cover the graffiti on the church walls. The mom-and-pop store down the street donated vegetables for the annual thanksgiving lunch which the whole neighborhood was invited to. Sometimes they would also donate water and juice for the snack bags that the church gave out every day to their homeless neighbors. How do scrappy churches survive? It’s simple. Scrappy churches can only survive if they step outside their doors and build relationships with their neighbors. When the neighborhood sees that the church is out on the streets doing ministry and is committed to bettering the lives of people, even those who are “unchurched” and “non-believers”, people will commit their time and talent to a place they see is doing good work.

In short, scrappy churches survive because of the people who have been marginalized by society and the mainstream church, but have found a home and a place where they are full participants of the leadership - not just charity cases. Scrappy churches are made up of people who fit perfectly because they themselves are scrappy. They have been told by society and even other churches that they don’t belong. They have been dealt horrible hands by an unjust society, but they refuse to be victims. Instead they thrive, and by extension their church thrives.

A scrappy church is energized by the faith of its people, it has an outward-looking focus, it is flexible to change, and it serves its community. As I stated before, there is a certain magic that happens in scrappy churches, but it comes at a cost.

I do not want to romanticize scrappy churches because doing so would be a disservice to the people and the work they do. Many times, family relationships suffer because so much time is spent making things work at church. The level of burnout for both clergy and laity is high in scrappy churches. Until structural changes are made at the diocesan level, and the work of scrappy churches is prioritized, we will continue to have people who burn out and communities that suffer. Unfortunately, there aren't many resources out there for scrappy churches and the standard Episcopal expectations do not apply. If we fail to come up with some new wisdom around resourcing these types of ministries, we run the risk of losing leaders and churches that are transforming their communities with their love, perseverance, and service.

Nancy Frausto is the Episcopal Diocese of Los Angeles’ first Latina leader to have grown up in a Spanish Speaking Episcopal Church who has gone on to pursue ordination. She is the recipient of the Episcopal Church Foundation and Beatitudes Society Fellowship. In 2014, she was selected as one of the Future 50 Interfaith Leaders in Los Angeles to watch by the Interreligious Council of Southern California. Currently she is serving as the Associate Rector at St. Luke's Long Beach. She is a board member for Bloy House and has served in the board for Forward Movement.

Nancy completed her Diploma in Theology from Bloy House and was the recipient of the Thomas Crammer Scholarship for Distinguished Achievement in Liturgical Scholarship. She then received her Master of Divinity from the School of Theology at Claremont. 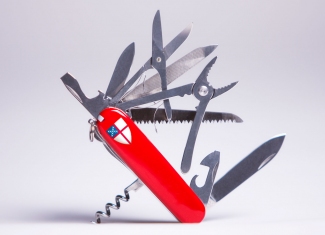