The room crackled with tension when I arrived. Members of the vestry sat on one side of the table; members of the Endowment Committee on the other. Silence ruled. At stake was a disagreement about how money from the endowment fund was going to be spent.

Each year the Endowment Committee asked for grant requests. They vetted the applications, made their best choice, and granted the money. The vestry had no input. Now, a new vestry wanted those decisions to be theirs.

In another instance, a church called and asked if I could attend a joint meeting of their vestry, Finance Committee, and Endowment Committee to explain how endowments worked. There was confusion about what constituted their endowment, how it was managed, how it could be spent, whether it was restricted, and who made what decisions.

Much of the work of the Endowment Management Solutions program of the Episcopal Church Foundation (ECF) begins with basic education – on matters of endowment structure, investment decisions, and operational “sticky wickets.”

Here are a few key points for effective endowment management:

Your role as fiduciaries

As fiduciaries, you have a legal obligation to manage your church’s endowment funds responsibly. The Uniform Prudent Management of Institutional Funds Act (UPMIFA) is a state law passed by every state except Pennsylvania that speaks to “true” or donor-sourced endowments for all non-profits, including churches. UPMIFA provides guidance to endowment committees regarding investing and spending from true endowment funds. Among other provisions, it names your core duties as fiduciaries:

Further, if you engage professional investment advisors, they too have a fiduciary responsibility. It is important for you to exercise due diligence in the selection process and then formally delegate responsibility for investment management, which the advisor formally accepts.

The roles of the vestry and the Endowment Committee

In the sample endowment policies that ECF provides to congregations, the vestry holds the ultimate responsibility for a church’s endowment. It grants authority to an Endowment Committee to manage the endowment and oversee distributions for agreed-upon purposes. It also names the members of the Endowment Committee.

The Endowment Committee makes sure that the money is well invested and that the rules are followed. It does not determine specifically how the funds will be spent. That is a vestry decision.

Understanding your role as prudent investors

Investment decisions begin with a written Investment Policy Statement (IPS) developed by the Endowment Committee and approved by the vestry. Typically, an IPS includes the following: the goals and objectives of the endowment fund; its time horizon, risk tolerance, and investment strategies; reporting requirements and performance reviews; and the respective roles of the committee, the custodian, and the investment managers.

As noted earlier, the vestry and Endowment Committee are fiduciaries. How they carry out their fiduciary responsibilities is judged by adherence to the IPS, not just investment returns. A good example of failure to follow an IPS can be seen in 2008, when a church invested in an 80/20 (equities to fixed income) portfolio decided it could no longer stomach the downturn in the market. It moved all of its assets to cash in January 2009, locking in its losses and missing out on a 26% increase in market value in 2009.

The goal of an Endowment Committee

Endowments are unique creations. They reflect the generosity of prior generations. They challenge the skill of the current generation to manage those funds responsibly. And they invite the current congregation to develop and sustain a vision for the future.

The Wheaton College Hymn, speaking of the prior generation who built the college, expresses the essence of endowment funds: “They builded better than they knew; they trusted where they could not see.” And the next verse … (imagine in the context of a church community):

“A hundred years pass like a dream.
Yet early founders still are we.
Whose works are greater than they seem.
Because of what we yet shall be
In the bright noon of other days,
Mid other souls and other ways.”

Ultimately the goal of an endowment committee is “to maintain the spending power of the endowment in perpetuity.” How do you accomplish that? Here are seven simple steps that will help you achieve that goal.

Step 3: Do your due diligence - Look for counsel regarding asset allocation, tactical positioning, diversification of assets, and performance over time as measured against standard indexes, risk controls, rebalancing, reporting, service, and fees.

Once selected, you should receive monthly statements and quarterly performance reports. Make sure the manager is complying with your IPS.

Step 4: Invest prudently - Diversify assets. Use professional managers. Avoid unnecessary costs — which means you need to understand the fees you are paying. Consider general economic conditions. Follow your IPS and review it annually.

Step 5: Spend prudently — develop and adhere to a total return spending rule -
Typically “prudent” means 3% to 5% of a rolling three-year average of the fund’s value.

Step 6: Link your spending rule to your investment strategy - The higher your annual draw, the more exposure you will need to equity assets. You need to balance risk tolerance with investment strategy while calculating long-term forecasts for return, inflation, and fees.

Step 7: Actively promote opportunities for planned giving on behalf of your church
Invested funds will grow incrementally; legacy gifts will add to your endowment exponentially.

ECF offers, at no cost, a set of sample endowment policies, a basic explanation of what an endowment is and does, and a memo on ways to give to an endowment as Word documents. To receive copies, please contact Ken Quigley at ken@episcopalfoundation.org. These can be easily adapted to reflect the details of your congregation’s particular endowment.

Kenneth H. Quigley is the Senior Program Director for Endowment Management Solutions at the Episcopal Church Foundation. He joined ECF in July 2005 and is responsible for marketing, customer service and account management for Episcopal entities that collectively invest their endowment and invested funds in the program. 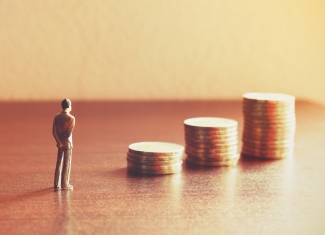