May 2019
Millennials and the Church

When I was a teenager, one of the first indications that I might have a calling to ordination was my discontent during sermons. The priest in our local church was, to my adult mind, unobjectionable. But my teenage self found her sermons so frustrating, that each week I would lecture my bemused family at great length about what she could have done better. Usually, I would rewrite her sermons entirely in a fit of ire during the week. It wasn’t the theology that I objected to, per se — it was how she said it. It was the way she communicated what should be the most exciting, moving topic in our world that left me flipping through the historical documents in the BCP.

There has been much said about the generational divide in other contexts. Generations affect how we approach stewardship, technological engagement, membership and even music. But generations also hear sermons differently — which becomes obvious if you’ve ever tried to make your way through one of the book of sermons recommended in the 39 Articles. No one has preached like that for a while!

First — let’s dispel some immediate fear. Sermons as an art form are not necessarily dead. While there is undoubtedly a place for well-done dialogue and discussion-based homilies, the basic, time-honored sermon format of a lone person talking is not foreign to millennials. Think of podcasts. Lectures may be evaporating a bit as a teaching strategy, but meanwhile, podcasts and audiobooks are experiencing a resurgence of popularity. So don’t worry that the sermon in its original format is on the way out. The format remains constant; but the style is changing.

For one thing, attention spans have changed. Podcasts and audiobooks are popular, but if you consider the way people consume them, it’s usually while engaged in some other activity. Listeners are multitasking — which has become more and more habitual (whether that’s a positive or negative is for another article).

So the task of the preacher now is not just to hold the congregation’s attention for a period of time, but to hold it undivided, which is a good deal harder. Unlike the podcast host, your audience is constrained from, say, driving a car while they listen to you or cleaning the house or entering data into a spreadsheet. Ideally, they are listening to your every word, fully engaged as the Spirit illumines the scripture through your preaching. All this means that your audience has a shorter attention span. The podcast host can hold forth for 45 minutes; you, the preacher, may get ten to twelve on a good week.

This means that the old three-point sermon doesn’t work like it used to. At best, a preacher can pull off a one-point sermon. In the words of a mentor, “Say one thing, say it well, then sit down.” To try to communicate more than one basic idea, one basic concept, is to overload the busy minds of your congregation. It’s not that they don’t want to listen to what you have to say or that they are disinterested. Personally, I deeply care about this stuff — but I can’t pay attention past a certain point, because nothing in my experience has trained me to do so.

Television shows cut to commercial every seven minutes, teachers in schools were trained to be as interactive as possible, and I’m used to consuming information in small, internet-ready pieces. In this time, the preacher’s job is to step into our frenetic world and speak some enlightening truth that can shape the busyness of the rest of my brain. You can buck this trend, but it’s a much harder task and a good deal less of what you want to communicate will be heard.

Language, like attention spans, can either enable younger people to hear your message or prevent any reception at all. Millennials, by and large, have grown up hearing gender-inclusive language. (It was a policy at my university to fail papers if they used man/men to refer to humanity — and I am an older millennial who attended a fairly conservative college.) Many of us also have grown up hearing gender-neutral language in referencing people in their jobs, relationships and conversation.

So to my ear and the ears of my peers, phrases like siblings or beloved in Christ instead of brothers and sisters, or spouses instead of husbands and wives sound more natural and normal. This may read like an attempt to be meticulously correct, but realize that for younger generations, it is language that accurately reflects our world. Humanity is not all male! Spouses are not just husbands and wives! When preachers use older language, it’s jarring to younger people and alienating, because it draws a line between the world they are describing and the world we know and inhabit. Language matters.

Similarly, examples matter. I once heard a sermon that was going along swimmingly, when the preacher said, “You know, it’s like how we all know exactly where we were when JFK was shot.” The people around me nodded; my face burned, and I tried to scrunch down in my seat. I have no memory of JFK being shot — that was 20 years before I was born. Because the preacher, speaking with the authority of the pulpit, was calling upon a common experience that excluded me, I felt I like I had gone from an included and welcomed member of the congregation to someone who didn’t belong.

This is easy enough to avoid. For starters, don’t assume that everyone shares your life experience. Not everyone in your pews has kids or is able to have kids. Not everyone is partnered or wants to be. Not everyone is able to partake in certain economic or cultural markers. Nostalgia here is also a danger. Know that while you and many of your congregations might hold fond memories of the days of Walter Cronkite and the Mad Men era, be careful about the nostalgia you use to spice your stories. Some people in your pews may remember those years as the time when women were severely limited and people of color had no rights.

I realize that is a severe warning, but the easiest solution is the basic screenwriting maxim — show, don’t tell. If you want to use an example from your own experience in a sermon, take an extra step and think about why. Why does that experience speak to you in this context? If you want to compare the week’s Gospel to raising kids, rather than saying, “Well, we all know how raising kids can be,” think hard about how you experienced raising kids. What emotion or thought do you connect with that experience? How is it like the Gospel here? Then say that. Unpack and explain your examples. Don’t just assume everyone in your congregation can follow you.

Trust the hearers and the Spirit

Ultimately, the job of a good sermon is an extended thought exercise. The preacher tries to break open the scriptures, so that the thoughts and feelings on the page become so real to the congregation that they are able to connect what they are hearing with the thoughts and feelings of their own lived experience — both individually and communally. As a preacher, I can only do so much of that work myself. I can use language that includes the congregation. I can unpack my own journey with the scriptures so everyone can empathize. I can do my best to focus the message so the congregation stays with me.

But in the end, the hearers, aided by the Holy Spirit, do the heavy lifting. The more the preacher is able to speak their language and include them in the homiletical journey, the more the listeners will be able to enter into the world of the text for themselves and the more receptive they will be to the movement of the Spirit in their hearts. A good sermon that speaks to all generations opens the door. It is still the Spirit that moves through it.

The Rev. Megan L. Castellan is the rector of St. John’s Episcopal Church in Ithaca, New York. She has written for outlets as diverse as Episcopal Café, Lent Madness, McSweeney’s Internet Tendency, and The (late, lamented) Toast, as well as contributed to several published books from Church Publishing. When not writing, she enjoys watching her husband play video games and her pets plan world domination. 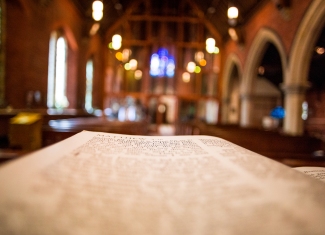