This article, the first of two, is an introduction to the kind of imaginative, strategic shift that is required for the Church to transition from institution to movement. Part Two will focus on the work of empowering others to join in solidarity.

You would be hard-pressed to find an Episcopal parish parking lot without “We are the Episcopal branch of the Jesus Movement” bumper-stickers on at least a few vehicles. Presiding Bishop Michael Curry’s vision has become a frequently invoked catchphrase in sermons, on the Episcopal conference circuit and on social media as a response to the question, “Episco what?”

But when we claim to be a movement, what, exactly, are we saying?

Many in and outside of the Episcopal Church regard the denomination as a social and civic institution. They see it as a Eucharistic country club, its liturgical smells and bells synonymous with the military pomp and circumstance of a state funeral or presidential prayer service.

Movement is a catchy moniker, and many in our culture are eager to lay claim to it. Its popularity, however, obscures the significant shift in identity that the Presiding Bishop’s vision denotes.

A significant shift in identity

Our world is experiencing radical change at a rate unprecedented in human history, and the institutions around us are in paralysis or even hell-bent on exacerbating the chaos. For Spirit-inspired and pragmatic reasons, we are now talking about how the Church’s primary means of expression is not as an institution, but as a movement. If the Episcopal Church is to be an agent of transformation in this world, we must be willing to move.

We know how to be an institution. We have a lot to learn about being a movement.

The Presiding Bishop’s adaptive language is an important first step toward this new identity. When we refer to ourselves as “the Episcopal branch of the Jesus Movement” and take seriously the call to walk in the Way of Love, we are subverting a static institutional identity in favor of a dynamic, reputation-risking, radically inclusive, justice-oriented, deeply disruptive way of being.

To live as movement requires is to go beyond language and retool our imaginations, resulting in a strategic shift in the way we operate. “Be transformed by the renewing of your mind,” the Apostle Paul urges.[1] Christocentric change emerges in and among those who nurture an expansive, playful, spiritual imagination. As Andre Henry – artist and theologian contending for a racially just world – writes and sings: “It doesn’t have to be this way.”[2]

Early Jesus followers were keyed into this vision that was nothing less than the total renewal and transformation of the world. They were considered a threat to the status quo, disparagingly known as “people who have been turning the world upside down.”[3] Today, agents of the Jesus Movement are called to offer a compelling story that will effectively counter the lies of supremacy.

But how do we do this? As we begin anew, we would do well to listen to those who have devoted their lives to learning how to move others to engage in nonviolent direct action in order to create social change.

Movement makers can learn from the groundbreaking research of Erica Chenoweth and Maria J. Stephan. They have quantifiably demonstrated that nonviolent movements are twice as successful as violent ones[4] in bringing about democratic ends, in large part because nonviolent revolutionaries are already living into the world that they seek to bring about. They are practitioners of the values they wish to see in the culture around them. This kind of integrity inspires others to join the movement. And the higher the levels of “active and sustained participation”[5] in the movement, the likelier it is to achieve its vision.

Successful movements refuse to be content with the world as it is. They embody the world they want, while strategically working toward a vision that is strangely and compellingly hopeful. They inhabit and live into that vision through tactics that are deeply disruptive of the status quo.

Gene Sharp, patron saint of nonviolent revolutionaries everywhere, wrote extensively about power and the capacity of nonviolent movements to overcome dictatorships and install democratic rule. In his seminal work, From Dictatorship to Democracy, Sharp wrote that some people who want the world to be different “assume that if they simply live and witness according to their principles and ideals in face of difficulties, they are doing all they can to implement them. The espousal of humane goals and loyalty to ideals are admirable, but are grossly inadequate to end a dictatorship and to achieve freedom.”[6]

Simply talking about being the Jesus Movement does not a movement make. First, we need a vision of Beloved Community that will inspire us. Then we need to be subversive and strategic followers of Jesus, working in solidarity with all who are oppressed for the sake of that vision. In this movement, we will need to learn how power works and that the people of God can shift what the late theologian Walter Wink called the “powers that be.” We will need to use tactics of nonviolent direct action (Sharp identified 198 of them) to undermine entrenched systems that do harm to God’s beloved.

As a sacramental people, we know something about this way of faithfully living in the liminal space between what is and what shall be. In the liturgy, we point to ultimate realities as already present and coming into being, even as the world around us is intent on keeping things as they are.

Jesus Movement people ought to be the most radical sort of revolutionaries.

After all, in Baptism we celebrate that each one of us is God’s beloved child, commissioned as an agent of the Risen Christ to seek Christ in every person and do justice in the world.

Every time we come to the Table, our communion with each other enacts the Beloved Community as God intended it, where all come in need of grace, where all are received as beloved, where all go forth strengthened to be Christ’s hands and feet in the world. As Augustine put it, “Behold what you are, become what you receive.” What if, every time we received communion, we took seriously this invitation of Christ to be changing people, open to the Spirit transforming us from within, so we might participate in Christ’s work of making the world new?

If we took Christ seriously, these sacramental acts would make the powers that be tremble. These are profoundly subversive practices, because they provide an alternative vision of the way things could be. As people of the Jesus Movement, we have the opportunity to weave our sacramental imagination together with strategic initiative. With a sacramental strategic imagination at work, we might have eyes to see communion and life emerging from the sites of division and death that are all around us. It is with this holy vision that we are empowered to boldly enact the ultimate realities of God’s reign in the here and now, and invite others to join us in this brave work.

The Rev. Lauren Grubaugh serves as Curate at Christ Church Cathedral, Indianapolis, an intercultural, multilingual parish devoted to spiritual formation, beauty and advocacy. As a priest, Lauren cultivates curiosity about the spiritual practices necessary for communities to become courageous and resilient agents of peace in an increasingly chaotic political and ecological climate. She’s a lifelong learner whose formal education has taken her to Virginia Theological Seminary, Fuller Theological Seminary, UCLA (B.A. in Spanish), and most recently, the Harvard Kennedy School, where she completed a course called Leading Nonviolent Movements for Social Change. Follow her on Twitter @laurengrubaugh.

2 Listen to the track here. Learn more about Henry and his work for an antiracist world on his website. His weekly newsletter, “Hope and Hard Pills,” is full of practical resources for antiracist living.

4 This research is presented in Why Civil Resistance Works: The Strategic Logic of Nonviolent Conflict.

5 From a talk given by Chenoweth at TEDxBoulder in 2013. Chenoweth has demonstrated that an oppressive government can be removed if 3.5 percent of the population of a nation is engaged in nonviolent movement. 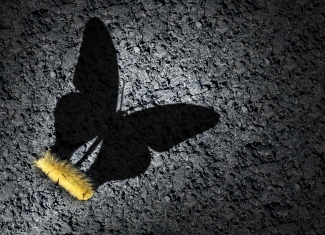