Prayer and Action In a Pandemic

When we learned that COVID-19 had hit the United States and people were dying from this deadly virus, I was heartstruck. I did not understand how this came about. I leaned to the Almighty, asking for wisdom and understanding. My first thought after the initial shock was: “How can we help others in the middle of this pandemic?” I know we can pray, and we do pray a lot. But as people of God, we needed to do more than that. We needed to act.

I felt this was a time when people needed to see a familiar face. They needed to see someone who cares for them and loves them. I saw such desperation and hopelessness in people’s eyes and their fear of being infected. I went out to the streets and began asking for donations of groceries. I felt compelled to do so, because the majority of the people we serve are undocumented. Many people are receiving help from the government, but there are big gaps for the less fortunate.

A grassroots effort to provide food and necessities takes shape

We began by finding a location where we could pack up groceries and pass them out to anyone in need. While we helped everyone who called and asked for help, my heart felt particularly drawn to the homebound elderly, the undocumented, the single mothers with babies and those home in quarantine with the virus.

I started posting on social media, asking for support. And people answered my call. We began to take groceries, diapers, formula and anything that anyone would donate to serve communities in the tristate area of New Jersey, New York and Pennsylvania. We had volunteer drivers take groceries to those we couldn’t get to. We were also able to get the Police Department in Norristown, Pennsylvania, involved. They helped deliver donated groceries to the elderly and people were so grateful. Seeing the police volunteering was important for the community. Every day we had new tasks and places to deliver the groceries and other items.

A month in, I received a call from a priest friend in Guatemala asking for help, and I began asking people to adopt families in that country. Thankfully, we were able to have many families adopted. We kept posting on social media – where we were going, who we were helping and the need, and we were able to assist many in these communities. It was entirely a grassroots effort, and grew to more than one hundred volunteers.

Taking prayer out to the community

After serving many people for about a month, we realized that we needed to do more. We began to pray for the communities. With a trailer and a caravan of cars, we drove to the different communities to bring hope to the hopeless. As I began praying on the trailer with a microphone and speaker, people came out of their homes with crosses in their hands. Some were crying. Some raised their hands, asking for healing. It was moving to see such desperate need, and not only for food but for hope. So many had lost jobs, and we needed to be the light in the midst of their despair. Many were afraid to come out, but I was not, because it was time to show the love of God, whether with groceries and handmade masks or by prayers for people. Everyone needs to feel love.

Generous hands and hearts provide for a vulnerable population

I spend many days preparing, getting everything together, picking up donations. I spend hours calling and texting people, asking for their help so we can help others. We have assembled a diverse team and are up early in the morning, praying and preparing. Although we are all serving, as pastor I also have to take time to listen to the many groups that come out to help. I listen to their pain and their needs. We have to make sure that our volunteers are also taken care of, because they are also in need.

We have a group that only makes masks, and they have made hundreds so far. These masks have been given to the people we see and mailed out to people all over the United States. Many people have donated money so we could buy food items on the lists that we created. Because we did not want food to go to waste, we asked the families we serve regularly to tell us what they like to eat and cook. Our groceries are packed with rice, beans, vegetables, coffee, milk, eggs, plantains, oil, sugar, cereal and everything they need to make breakfast, lunch and dinner. They are meant to last for at least two weeks. We also receive donations from supermarkets. We were given 500 boxes of diapers of all sizes by an organization and other organizations have given us baby food, toiletries and much more.

Things seem to be starting to settle down now as people start to go back to work. The first three months were nonstop. We went from serving 30 bags of groceries to hundreds every week. One Monday morning we served over 400 bags of groceries, not including boxes of fresh vegetables. We understood the need was greater in the communities we serve, because many people do not receive any government assistance. We continue to respond to calls and emails from those still living in dire need.

Overall, we have served thousands of families so far, including children. We have specific bags for children, and each child picks up their own groceries and vitamins. As a grandmother, one of my most touching moments has been to see so many children coming to pick up their little bags. The joy and gratitude in their faces are a tangible and visible sign to me that God is also smiling at us, even amidst a scary and isolating pandemic.

The Rev. Yesenia (Jessie) Alejandro, founder of Mothers Mission, has been working with communities throughout Philadelphia, its surrounding counties and Puerto Rico for over 25 years. A well-known activist in the city, Jessie's passion is to help and serve the elderly, children and families. As an outreach of St. Mary’s Episcopal Church Chester, donations to Mothers Mission can be made by contacting Rev. Jessie at 856-580-7174, or visiting this link. Follow her on Facebook at Jessie Alejandro or Instagram at Jessie Alejandro1. 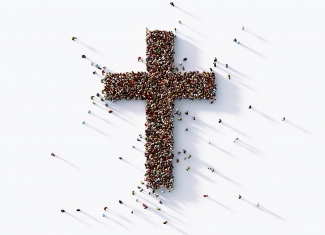