I find playing historical music to be liberating. Perhaps this seems a bit strange, since it often involves quite a bit of research and learning (if not re-learning) to play music composed for older forms of our modern instruments. When I first entered the world of historically informed performance (HIP), which seeks to be faithful to the approach, manner and style of the era in which a work was originally composed, I stressed myself out over how to do everything “correctly.” I wanted to make sure I was adhering to the right treatise from the right critic from the right country/town/region from the right time period. However, after learning techniques for applying my research to my performance, I found that the HIP method was more than just playing as an 18th century music critic would like. It was a method for reinterpreting music and for questioning why one way was “correct” while everything else was “wrong” or “in bad taste.”

In my formal training as a classical musician, I sought to break into the world of orchestral music. This involved winning an audition, a process that often entailed performing musical excerpts in a very specific way to signal to the judges on the other side of a large screen, that I knew how to play everything “correctly” and that I had studied with all the important teachers. This audition process turned much of music into a precise science rather than an art, and it has been the cause of burnout for many of my colleagues and friends.

When I started studying HIP techniques, I began to enjoy music again. Perhaps the most inviting aspect of music is that composers often left many details to the performer. For example, instrumentation was not always strictly specified. Many pieces known today as a “violin sonata” could have been titled “for violin, flute, recorder, oboe or treble instrument.” Because of this, any piece of music was fine enough for my instrument, and I could change things up if I felt like it. Another potential variation in instrumentation is the use of percussion. It was rarely specified in compositions, but many documents show percussion used in many different contexts.

Even in the colonial era in New Spain, European composers, who were more familiar with this practice of imprecise instrumentation, would document the music of the Indigenous musicians and even compose music for Indigenous instruments. This is quite different than some cross-cultural music I encounter today, demanding that everything conform to a specific chord structure or sound.

Another decision left up to the performer was how to play different musical parts. The music written down, particularly from the 16th-18th centuries, would often have little more than the notes. The composers would leave the questions of dynamics, phrasing, tempo, articulation or even ornamentation up to the performer. This factor has made me appreciate learning this music because it gives me the opportunity to suit the music to my own style of playing. Sometimes I can play a piece quickly, sometimes more slowly with more flourishes in between. Sometimes I can play my favorite part really loud for everybody to hear, or softly, so people have to come closer to listen in.

In addition to sticking close to the melody as written, much of this historical music allows for improvisation, something that many classical musicians are not well-versed in because of the 20th century obsession with playing everything exactly as written on the page. As an Indigenous Latino musician, I was raised in a music tradition rich in improvisation, and I learned to improvise in different styles. When I was training as a classical musician, however, I did not have many opportunities to use these techniques – at least not until I started playing HIP music. The HIP world has helped me bring my roots, roots that aren’t always recognized or celebrated in the Western classical music world, into my performance as a classical musician. I’ve enjoyed being able to add my own spin to different melodies when among friends and even on stage. I love the fact that communication between different musicians doesn’t just have to be imitating the dynamics or articulations, but it can also allow me to emphasize a melody with an extra flourish of notes.

In the past year, I have been able to apply my HIP techniques to music I’d performed in the past and to new music. Perhaps the most important thing was that I did not need the music I studied to be as detailed as when I played in the same room with other performers. Instead, I have been able to play music on the instruments I have at home and in the ways best suited to them. Although this was mostly with older music, I was able to venture into the world of more modern music again, keeping it well within my grasp, in the lockdown situation. I felt like I could question why modern music needed to be played in a certain way, too, especially since I was performing it for myself. This approach has helped relieve some of my anxiety around not having in-person rehearsals, reading sessions, lessons or performances.

Taking ownership and changing it up

As we move out of lockdown, I hope that I can apply these techniques to future musical projects, especially those that take place in church. Here are some things to consider:

First off, it is not mandatory for it to be sung with a choir and organ. That’s only one way to interpret the hymn. Maybe I can appreciate the melody by itself by singing it in unison. Many of our beloved hymns began as simple melodies before all the other parts were added. In particular, the older hymns (such as those set/written by Martin Luther) may have been popular dance melodies in the 16th century. Perhaps our new interpretation could be a bit faster or slower than normal. Maybe some percussion – clapping or drums or other instruments – could be added to the music.

Maybe I can add some different instruments. For many of our beloved church composers (such as Bach and Charpentier), hymns were compositions with different possibilities for instrumentation. Charpentier’s orchestra could have flutes, oboes, recorders, violins, organ and choir singing the exact same melody. Bach’s hymns could be for just voice and organ or horn and voice or only violins.

Maybe I can improvise with the hymn. If I am playing an instrument with other people singing, maybe I can add some notes here and there to connect different passages together. If the hymn follows a specific harmonic pattern, maybe I can improvise on the harmonies rather than the melody. It doesn’t have to wait for the fourth verse as a descant. Maybe I can try improvising over the melody sung really slowly, filling in the gaps with more and more notes.

In the music world, we may not always feel comfortable reaching outside of what we’ve been taught. Especially for us classically trained musicians, it can be difficult to break out of what’s written on the page or what our teachers have drilled into us. But we have a long tradition of musicians taking ownership of music and changing it up. Instead of confining ourselves to the box that we continue to reinforce, we can take a cue from our predecessors and reconsider how we approach playing music.

Ellis Reyes Montes is an accomplished musician and writer. He is a life-long Episcopalian from Houston, Texas, and pursues his passions in music and writing with the loving support of his family. He often leads music and liturgy around the Episcopal Church, and he is a Story Weaver with the Beloved Community StorySharing Campaign. In addition to researching and leading church music and facilitating story sharing, he performs with various ensembles around the country, and he maintains a blog, openlyepiscopalian.blogspot.com and a podcast, The Faithful Music Master, where he seeks to investigate the love of God for all of God’s creation. Whenever he is not writing or practicing/performing, he can be found studying languages, playing bridge, gardening or reading.

A few examples of HIP techniques and thinking

Tracks 1-3 on this playlist are from the opera, Alcyone, by Marin Marais. The tune of the first and last dance would be rewritten as the Christmas carol, “Masters in This Hall”. The music does not specify anything more than a treble and bass instrument, but, as this ensemble does, there’s percussion and improvisation on top of the melody.

Track 4 is a piece from the colonial era in New Spain. This piece is probably a dance from the Indigenous community or a syncretism of Indigenous and Spanish musical traditions. The notation is unclear about which instruments are to play or even the tempo, but this ensemble brings the music to life.

Track 5 is from Bach’s cantata, Nach dir Herr verlanget mich BWV 150, and it features at the start a rising scale from the voices, but then it passes onto the violins. A similar imitation happens at the end of the movement, with the violins playing the same thing that the voices sung before.

Track 6 is a famous piece, Pachelbel’s Canon in D, but performed at a livelier tempo. The original piece was probably intended as a dance, with the violin parts evoking the sounds of dance fiddlers rather than stodgy violinists waiting for a bride to get from one place to another.

Track 7 is the original setting of the hymn tune that would become the famous Passion chorale, “O Sacred Head, Sore Wounded.” Perhaps it’s jarring to use such an upbeat setting for the text that we often pair with the tune, but it is the origin of this hymn tune, and many (if not most) of our beloved hymn tunes have similar origins. 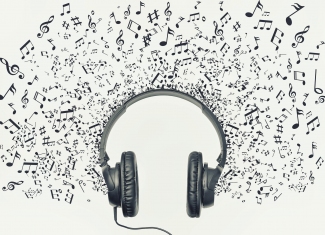