Stewards of the Earth

There was a landowner who put his top employees in charge of his holdings. He said to them, “Take charge of it – and take care of the place. Bring your families to live on the land, and enjoy its produce. Serve it faithfully, and from its care you will live abundantly.”

So the servants came on board. They lived on the land, and raised families there. They were as fertile as the land itself, and they grew in numbers. And it was theirs for the taking – to take charge of, to take care of, or to take advantage of – and with the land they served as their home, they would live in hope and abundance or in fear and scarcity. It was up to them.

What will they say when the landlord comes? How will they be with him? As servants entering into joy? Or as sad stewards with empty fields, exhausted resources and mistreated fellow creatures to show for their stewardship?

We are familiar now with the data and analysis that have exposed to our concern the phenomenon of climate change. It is a transnational challenge that faces us on a global front. Many of the crises and problems facing humanity on occasional or local bases connect to this root phenomenon: we live in the Age of the Anthropocene.

Human activity shapes geography, climate, biosphere – and even geology. We are making, through our collected and cumulative activities, a permanent impact on the landscape of our world: its ice and free water, its air and clouds, its land and growing things (including food for ourselves and all other animal creatures) – and hence, on the sustainability of life for ourselves and our fellow beings.

Recently I attended a meeting of the American Academy of Religion in San Diego. I met a Turkish seminarian from Istanbul, an exchange student in the United States, who told me he’d polled his fellow students, asking them, If you saw a cricket in your room what would you do? Ninety percent said, I’d kill it.

“And these were seminarians!” he exclaimed. “What became of compassion for all creatures?”

Remember our role in the Creation

Let us not make the Anthropocene the anthropocentric. Let us remember our special mandate as human creatures to care for the earth – not just to multiply and fill it, but to tend it. We are the stewards, the workers in the garden, of this green and gold and glorious, blue white planet. It is our home – not as owners, not as exploiters, but as chief tenants. We are the managers of the apartment house, so to speak, not the landlord.

We look forward to the return of our landlord with joyful expectation, but also some anxiety. Our anticipation is mixed with feelings of loss and grief – and even guilt. In our Christian hope we turn to that landlord and yearn for his presence.

As preparatory work for the hope that is born in us through faith, we must acknowledge our failures – perhaps irrecoverable, some of them – as stewards, even brothers and sisters, to earth and our fellow created beings.

But our Christian perspective, even in the kingdom of anxiety that is this world, is that we can do something still worthwhile, small and large, in our collective identity and our solitary pursuits, to move toward the day of his coming with rejoicing – a welcome made possible only because we do not stand alone.

God is indeed already with us – in our suffering and elation, our watchfulness and neglect.

What we face now with environmental catastrophe is unprecedented in scale, possibly, but not in moral quality or human impact. A famine up close is a hungry village, a starving face and a child with no solace. A forest fire or a drought is in aggregate a great disaster.

But again, up close it is the tragedy of each creature swept up and away by destructive forces. Each of us has stories to tell and promises to keep on the human level – efforts, token or tiny, that help us move forward as we confront the common foe. Together – as we band together – there are large things we can do even yet to make the world a better place.

Maybe the time of changing light bulbs is over as enough. But the time of the Anthropocene, as geologists call this, our human-fashioned epoch, has just begun.

Our place and role in creation

We too easily indulge in a self-delusion about the place of humanity in creation. We are deluding ourselves if we think our self-assumed pose of superiority to the rest of creation is something mandated in the Bible.

Genesis 2:15 (CEB): The Lord God took the human being and settled him in the garden of Eden to farm it and to take care of it.

In other words, we are both to cultivate the land and to take custody of it as servants of the Lord. We are stewards of the earth, caretakers and custodians.

We are God’s representatives, or images, in creation, so exercising that stewardship is a servant role, subservient to the true landlord of the universe. We have power to alter the world, but we depend on the earth and its life for survival.

Our “rule” is subordinate – submissive to God and God’s will for creation – God’s will, not our own.

Take care, take charge. Fill the earth, be fruitful and multiply, and replenish the earth. And delight in it.

The Rev. Dr. John Leech is Priest Associate at the Episcopal Church of Saint Matthew in Tucson, Arizona, and is a member of the Creation Care Council of the diocese of Arizona. 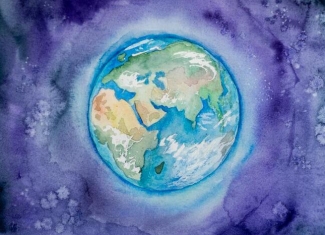