How the Pandemic Cured my ASA Obsession

This used to be my ritual every Sunday after worship: Finish chatting with congregants at coffee hour, walk back to the office, pick up the slip from the greeters with that service’s attendance numbers and write that number in the red record book. I often had my own guess as to what the number would be. The little hit of adrenaline that came when it was larger than the week before always felt good. Of course the reverse was also true. On sparsely attended days, I hated writing down that number.

My name is Alissa, and I used to be obsessed with Average Sunday Attendance, or as we professional church nerds call it, ASA. I am a parish priest and congregational development consultant. Working with congregations is a passion of mine, one I live out through my work as Canon for Congregational Development in my diocese, through working with hundreds of congregations in my years of directing and training for the College for Congregational Development and through side gigs with individual congregations. “Numbers never tell the whole story,” I am fond of saying to my clients, CCD participants and my own Bishop’s Committee. “But they do tell part of it. The numbers aren’t nothing!” I am here to confess to you that before March of 2020, I lived like the numbers were everything.

I have served as vicar of St. Columba’s in Kent, Washington for the past eight years. Prior to March 2020 I loved tracking my congregation’s attendance patterns so much that I kept my own spreadsheet. It included notes about how many kids were in attendance and how many newcomers had showed up. I scanned for patterns and compared Sundays year to year to discover trends. Over the years I felt as if my obsessive attention was rewarded. For the most part, before the pandemic, St. Columba’s numbers grew. Summers were always lighter, but every summer had higher attendance than the last.

There was the time it snowed on Christmas Eve and cut our numbers in half, but that was extraordinary. Anyway, I told myself, Christmas Eve isn’t a Sunday. About three years in, our ASA leveled off. I couldn’t sleep, sure that the dip in numbers meant all the energy, joy and vitality I cherished in my congregation was about to crash to an end. My mentor told me to relax. “Look,” she said, “sometimes a parish needs to spend a couple of months in their pajamas. It can’t be grow-grow-grow all the time.”

She was right. The numbers started going up again, my congregation kept being its lovely self, and I started sleeping through the night.

Then March 2020 hit. I remember the last week that people were in church. We had decided to get a jump on things, knowing that some of our folks were staying home. I had a parishioner streaming the service to Facebook, using my cell phone. Attendance was sparse – down by a third from where we’d been trending. Then the next week they were all gone.

We chose to livestream our Sunday service each week with a small and dedicated team. If you were to look at our record book you would see that for a long time I kept writing in numbers. Seven. Seven. Seven. I engaged in diocesan conversations with other clergy, trying to figure out what to track. Was it live views only? Clicks? Comments? That eyeball thing that comes up on Facebook when you are officially viewing?

None of it was the same. Sometime in the fall of 2020, we just stopped writing it down.

After the shock of preaching to a camera in a mostly empty room wore off, grief set in. It wasn’t all about the numbers. But I realized that the numbers had come to be the primary way in which I measured the vitality of my congregation. I knew that we were still a church, still vital, still connected and caring for each other, because the numbers went up. Parish ministry is charged with anxiety and uncertainty in the best of times, and I have never had the experience of being a parish priest in the best of times. I came to rely on the numbers as an anchor in the choppy sea of pastoring during this weird and wild season in the mainline church. Without them I was adrift.

In the world of congregational development there are lots of ways to measure development and growth. Some of these metrics are “lag” metrics and others are “lead” metrics.[i] Lag metrics are concrete measurements that show you something true about the past: How many people attended; what percentage of pledges were paid; how many years the HVAC system lasted before it busted and couldn’t be put back together again. Lead metrics are the things that you do to create the lag metrics, and they can be harder to figure out. The lead metric for a HVAC that lasts 35 years instead of 25 years might be professional maintenance, done regularly. The lead metrics on paid pledges might be a stewardship season that is firmly connected to spirituality, or instituting a culture of year round stewardship and financial transparency or simply introducing pledge cards for the first time.

When it comes to attendance the lead metrics seem to vary widely from congregation to congregation, depending on that particular faith community’s context, culture, history and countless other variables. You can generate basic questions like: Is your building inviting? Do your congregants know how to talk about the transforming power of God they experience in church? Does your website accurately reflect the feel and ethos of your place? The answers to these questions and others are the lead metrics that produce attendance, at least in part. But there are other, less controllable dynamics also at play – things like who is moving in and out of your neighborhood, or whether or not there is a global pandemic.

The most important metric

As a bit of fun during the 2021 Epiphany season, St. Columba’s parishioners decided to “flamingo” each other. We bought four flocks of plastic pink flamingoes and stuck them in four different congregant’s lawns, with instructions to take pictures and then go secretly flamingo another parishioner. Unsuspecting members of our community would awaken or come home to bright pink birds in the midst of the dark grey Pacific Northwest winter. Folks loved it. Some created a flamingo box for apartment dwellers who didn’t have a lawn. Elders did it and took selfies, families with kids did it and posted videos. Many pets were roped in to pose for pictures.My congregation loved this way of having fun and staying connected while still safely distanced. It was a lead metric – an opportunity for fun and connection that was seized upon by the whole community.

I watched the selfies and sneak attack flamingo videos pour in and realized I’d been wrong about which metric mattered most. It wasn’t how many people watched online worship, or how many returned in person once that was possible again. It was never the number that got written down in the book. The most important metric was how my people loved each other.

Before the pandemic that love was most visible when we were together, a thing that happened most often on Sunday mornings. During the pandemic we found other ways to connect and love on each other – buddy groups that checked in regularly, zoom baby showers, younger parishioners taking over the food bank when it wasn’t safe for retirees to do it, drive up radio church in the parking lot on Christmas Eve. And the flamingos, of course. These lead metrics, which had been so difficult for me to grasp and see before the pandemic were now all we had. It was more than enough.

We’ve been back to worshipping inside on Sunday mornings for almost a year now. I did start writing numbers in the book again. The numbers aren’t nothing, but I am much more deeply aware that those numbers are a representation of the deep connection, love and hope that is birthed and renewed in my congregation. They are not the only representation, however. And it is the love, not the number, that needs to be nurtured.

The pandemic took so many things from me as a pastor and priest. I could list them, but if you’re reading this, you are a congregational leader and you know. You took those hits, too. But here is the gift this awful time of loneliness and distance has given me: I can see past the numbers now. I’m free to see the people and the love: The Body of Christ in action.

[i] For a deeper discussion of this metric dynamic, see the book “Faithful Metrics” by Peggy Brooks.

The Reverend Canon Alissa Newton is the Vicar of St. Columba's Episcopal Church in Kent, Washington, Canon for Congregational Development in the Diocese of Olympia, and the co-author of Vital Christian Community: Twelve Characteristics of Healthy Congregations, set to be released by Church Publishing this fall. 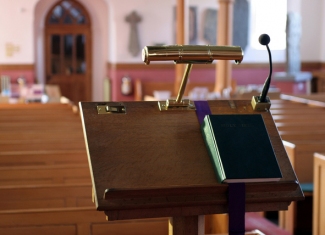