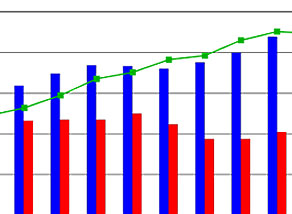 In all the talk about church growth and new ways of doing church, there’s one statistic that’s impossible to quantify: the number of people impacted by a parish’s online ministry.

For some time now, the gold standard for measuring church growth has been Average Sunday Attendance (ASA). Go to any clergy conference and you’ll hear rectors tossing out their ASAs with great bravado. The assumption, of course, is that size matters and bigger is better. Though, if their ASA is dropping, you’ll hear the classic corollary: “It’s not about the numbers.”

In reality, ASA as a standard unit of measurement is a relatively recent phenomenon. For generations ”communicants in good standing” was the normative measure of a congregation’s size. The national canons of the Episcopal Church still use this term, though it’s fallen out of contemporary usage.

It was only until more and more parishioners started signing up for what I like to call the “one or two Sunday a month plan” that ASA became a clearer measure of congregational size. For instance at my own parish, St. John’s in Hingham, MA, our ASA was 245 last year. Of course in a given month we would see a lot more than 245 people — while there is a core group that attends every week others come once or twice a month. Using ASA gives the best “snapshot” of the number of attendees on an average Sunday.

I’ve been thinking a lot about what isn’t included in these numbers and I keep coming back to online ministry. Just as online relationships are real relationships, online ministry is real ministry. Parishes that put effort and intentionality into social media and online communication with parishioners and others are reaching many people beyond the number recorded in the service register each week.

Even when people can’t make it to church, they read or listen to sermons online, they’re inspired by spiritual links in the weekly e-news, they feel connected to the community through pictures or videos posted via social media. These are all ways that a parish reaches out and touches people who identify themselves as “members” of the community.

But many parishes, through official channels as well as the personal online ministry of their clergy (social media, blogs, sermons, things like, um, Lent Madness), reach many people well beyond the local community. This is also a critical part of ministry to the wider community — keeping God in the public conversation — which I believe all Christians but especially clergy have a responsibility to uphold.

The thing is, it takes a new congregational mentality to support this type of ministry. It’s not always quantifiable and the parish doesn’t “benefit” in the traditional sense. So it takes an open-minded congregation to recognize that this is all ministry – especially when it impacts those who will never officially join or even step foot inside the church building.

This is a new model of being the church and it naturally brings pushback from those with a more traditional, congregational, consumer-driven mindset. “Why waste time on Twitter when you’re mostly reaching people who will never pledge to the parish?” I sometimes hear. Or “He has time to write his monthly syndicated newspaper column but he can’t visit Edna in the nursing home more than once a month?”

My congregation is likely sick of hearing me say, “We are called to share the gospel, not hoard it.” It’s one of my mantras for ministry. But sharing the gospel means doing so in creative ways that transcend the way we’ve always done it. It means reaching out and sharing the Good News with others even if they will never become members of our own local tribe. As Christians, one of our mandates is to sow a lot of seeds. The internet allows us to do this in ways and in places never before imaginable. And just because we can’t quantify or monetize this approach doesn’t mean we shouldn’t engage it.

So this is a call to push past the opposition you may encounter and continue to share the Gospel of Christ with reckless abandon. The Church is changing, the methods of communication have changed, but the essence of Christ’s message endures.

This post first appeared October 15, 2013, on Tim's Clergy Family Confidential blog. It is reprinted with permission.