Giving Away the Church

“Giving from Our Abundance” sounds like a tired stewardship campaign slogan, but what might happen if a church did this? What might be the result of giving away something of great value, even while being limited in other areas? A congregation that has been blessed with gifts must share.

In Minnetonka, Minnesota, an affluent suburb of Minneapolis, the need was to replace or upgrade the local food shelf, Intercongregation Communities Association (ICA), which worked out of a condemned house. There was no privacy for clients and food storage space was limited. When the Rev. Jim Cook, former rector at the Episcopal Parish of St. David’s, toured the ICA building, he was embarrassed; he could not accept that this was the way the community treated people going through hard times. Great things have happened from this tour, both for ICA and for St. David’s.

By early 2004 ICA had looked for a practical and affordable building for four years, but was unsuccessful. The mayor of Minnetonka had been helpful to ICA, speaking to member congregations and urging them to find a solution. This was the situation into which the Rev. Jim Cook stepped with St. David’s.

St. David’s has served the Minnetonka area since 1950 from four acres of donated land. Average attendance is about 200, and there are about 200 pledges; growth in both has been steady since the late 1990’s. Outreach has long been a hallmark of the parish. Some projects have been supported for decades, and new ones are continually tried.

Blessed with land
Could this parish which was blessed with land, but which always felt limited by money, be part of a solution for the food shelf? The wardens began discernment. Was sharing property going too far? Would this move inhibit future growth opportunities? Since St. David’s was struggling to meet the budget, was it fiscally prudent? The wardens decided that none of these were stoppers.

Before taking the proposal to the vestry, Cook and the wardens evaluated what was necessary for this project. They sounded out church leaders for support and talked with food shelf leaders, who had looked for a building on practical, affordable sites and were unsuccessful.

Cook had been talking for some time with parishioners who might be challenged by a legacy gift. He found a couple, Judie and Mark Jones, lifelong residents of Minnetonka, longtime parishioners, and volunteers for ICA. They agreed to fund the shell of the building; ICA agreed to give an equal amount to finish and landscape the building.

Energy and determination
With these four key elements in place the wardens proposed to the vestry that St. David’s build a food shelf building for ICA. The idea was well received, with little dissent. The long range implications of the project did concern the vestry. Over several months the vestry came to a clear decision: the will of the parish was to find a way to house ICA, an important ministry of the church since ICA’s founding. The food shelf fit within the current mission plan and there was energy, even determination, for the project.

The vestry faced many decisions on the project. Some were easy — would the value of what St. David’s was giving to ICA count against the diocesan apportionment? The consensus was that the Bishop would not agree. The terms of the lease, the lifeblood of the relationship, were hammered out delicately. The length of the lease, who was responsible for maintenance, hours of operation, and other obligations were considered. A vestry covering the spectrum of the congregation was valuable. Cautious voices pointed out pitfalls, and gung ho voices urged finding a solution. Both were essential.

Communication with the parish was critical. All discussions and decisions were as transparent as possible. Great decisions were being made; there was no reason not to share information. Vestry members were urged to listen constantly to the congregation.

Another element came into view — the neighbors. St. David’s sits on a cul-de-sac. Over the years the church property has become surrounded by residents who like a quiet street, except for Sunday mornings.They became fearful at the thought of traffic, and perhaps worse, the types of people drawn to a food shelf. The city urged that the neighbors be consulted. Meetings were painful, but beneficial. The neighbors forced the planners to consider the details, making the project better by their demands.

Problems were solved
The project took off. Many church members donated professional skills. From lawyers to architects to developers to public relations, the parish and the project profited from wide participation. People with the right skills were in the right positions to solve problems.

By December 2005 the plans were drawn and the parish had affirmed the vestry’s decision for the project. The City Council approved the plans in March 2006. ICA moved into the 10,000 square-foot building in March 2007. Staff and volunteers relish the privacy to interview clients — who arrive on an average of every fifteen minutes five days a week — the warehouse space to store products efficiently, and the aura of the building which says to clients: “We care about you.”

St. David’s has changed from this project: The parish broke through the fear of limitations. We continually refer to the ICA Center at St. David’s as a signature mission.

It is a gift to the community which also says something to the community about the parish. In order to keep up with our new neighbor we have begun a capital campaign to spiff up our building.

We have also begun the transition process to find a new rector, as the Rev. Jim Cook has assumed a new post. We lost a rector who urged us to take on a huge project, but we gained a sense of accomplishment in completing it. A church which prides itself on its outreach efforts gets to give what it has in abundance. In this case, it was land. In return, we have a newfound drive for more of God’s work. 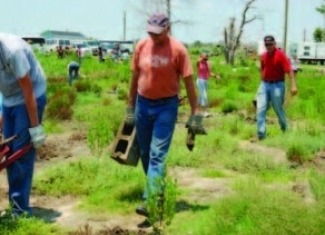 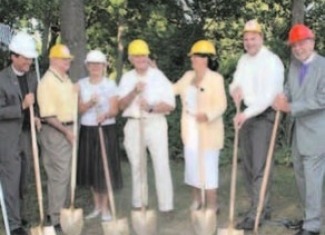