Each holiday season, members of St. Timothy’s Parish in Danville, California set aside part of their busy Christmas preparation schedules to provide gifts to the area’s needy families as part of the Adopt-A-Family outreach program. The Monument Crisis Center in Concord, a local relief organization, provides lists of families with specific needs; donors can choose to buy gifts for families who would not receive them otherwise.

About ten years ago, parishioners noted that many families requested bicycles for their children and themselves. For many, bikes served as their primary transportation to school and work. Donors, wanting to meet this need, were faced with the potentially expensive prospect of buying a lot of new bikes. While used bikes could fill the need, the condition of donated bikes ranged from shiny and barely ridden to rusty and barely usable. A simple question arose – who might repair these bikes and make them useable?

First to take on the bike repair challenge was Helen Coleman, a member of St Timothy’s who had experience working at a bike shop while in college. She and some older members of the congregation began by pumping up a lot of tires and doing whatever repairs they could.

This is how “Adopt-A-Family Bikes” began. Dave Struck, who also repaired bikes during college, became involved, and was soon joined by a handful of dads. The group worked in the basement of St Timothy’s with tools, degreaser, rags, and some parts. Included in this group was Rand Mahoney, whose family had just recently begun attending St. Timothy’s. On a couple of nights, his son Ryan (then eight years old) joined him.

“At first, I just hung around and waited for my dad,” says Ryan, who is now 15 and a sophomore at San Ramon Valley High School. “Then I started to help out with simple jobs like holding parts. I just wanted something to do, but I started learning a lot about bikes and how to fix them. Pretty soon I was begging my mom to let me go to “Bikes” on school nights and weekends. I liked being with my dad and the other guys, but I really liked seeing how old broken greasy bikes could be changed into gifts for kids who really need them.”

Year by year, the program has grown: in the number of agencies requesting bikes, the number of volunteers, the space required to work on the bikes, and the number of donated bikes. Last year Adopt-A-Family Bikes served at least nine agencies, occupied a large donated empty retail space in a local shopping center, and was able to distribute over 250 bikes thanks to the over 50 volunteers who cleaned and repaired them. In addition to St Timothy’s members, many of the volunteers come from the local community. Dads, moms, co-workers, scouts, sport teams, foster kids, local bike shop employees, and seniors (even an 85 year old!) have worked side by side often at odd hours trying to fix up as many bikes as possible to meet the Christmas distribution deadline.

Each year, Adopt-A-Family Bikes has been financially self sustaining. Bicycle donors are asked to contribute five to ten dollars to help with expenses for parts and materials. Most parts are bought at cost or donated from local bike shops. Local retail management groups donate the space for the temporary repair shop and a donated truck is used to deliver the finished bikes to the agencies that receive them for distribution.

Ryan describes his experience helping distribute bikes two years ago. “My parents let me skip part of a day at school to take part in handing out bikes at Monument Crisis Center. It was so cool to see bikes I had worked on and then see the faces and hear the stories of the people who got them. There was so much excitement about how the kids would love their bikes or how the bikes would help them. Working on the bikes was fun, but handing them out was the best.”

It is clear that involvement in the Adopt-A-Family Bike program has had a profound effect on Ryan. “I’ve gained valuable mechanical knowledge about bikes from the experienced adults I worked with. I’m sure that working with them as a team has taught me a lot too. This year I am planning my Eagle Scout project to include Adopt-A-Family Bikes and I plan to involve many scouts and more volunteers. This is a project that has benefits on so many levels.”

Ryan sees great benefit in how he has developed strong working and personal relationships with people who give a lot of time and energy to help others, and is thankful to have such great role models for himself and the other young people who volunteer at “Bikes.” He also mentions other benefits, such as plenty of refreshments and food donated by some of the volunteers.

“Adopt-A-Family Bikes is really a lot of fun. There is a lot of camaraderie and a great sense of accomplishment. I love to take people to the shop and show them the rows and rows of shiny clean beautiful bikes ready to be given away. It’s really a great feeling. I am blessed to be part of this outreach program at St Tim’s, and to see how it has grown each year.”

Ryan Mahoney and his dad are actively involved in the Adopt-A-Family Bike program at St. Timothy’s in Danville, California. Now a high school sophomore, Ryan, who started volunteering with “Bikes” when he was eight years old, is a member of the Boy Scouts of America and is incorporating Adopt-A-Family Bike into his Eagle Scout project. 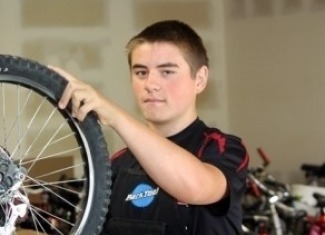 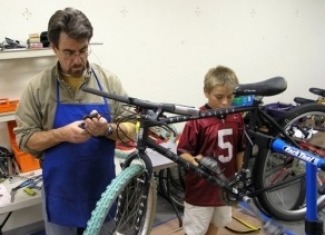 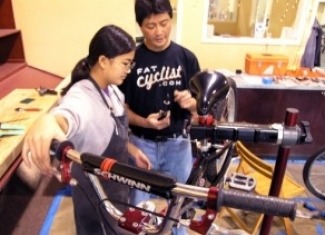 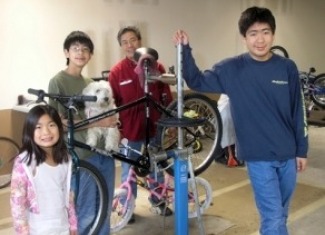 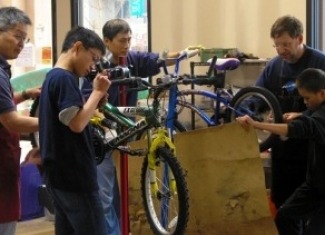