A Snapshot of our Urban Neighborhood

"The hardest thing to see is what is in front of your eyes."
- Johann Wolfgang von Goethe

St. Mary’s Mariposa is a 104-year-old congregation in a densely populated urban neighborhood of Los Angeles. It started as a neighborhood church - specifically an outreach to the large Japanese immigrant population that lived in the neighborhood prior to World War II. The neighborhood, which includes a lot of rental housing, has changed continuously over the century of St. Mary’s existence, always housing many new immigrants. The current population is mostly Latino and Korean.

Most of St. Mary’s long-time members, some of whose families have been in the church for several generations, and including the entire Vestry, now live in more suburban areas of greater LA, and spend little time in the St. Mary’s neighborhood other than on church property.

Seeking to reconnect with its neighborhood, St. Mary’s has made significant strides by starting a service in Spanish, as well as by hosting a Head Start preschool program.

The photo project was designed to give the Vestry the opportunity to take a closer look at our neighborhood. It was not intended to lead directly into strategic planning, but rather to shift our perspective and open our eyes to creative possibilities and creative ways of looking for God at work in our neighborhood and God’s call to us as a parish.

We did this in the context of a one-day Vestry retreat. People arrived around 9:00 am and shared some breakfast snacks. Because of a fun run scheduled near the church that day, many of us had already seen more of our neighborhood than we had planned on by the time we got around roadblocks and made it to church! Even that frustrating adventure was made a little easier by knowing that our mission for the day was to see the neighborhood with new eyes.

We read Romans 12 together and had a brief reflection using the mutual invitation process. The rector offered a short reflection about the call to “weep with those who weep and rejoice with those who rejoice.”

We then headed out in groups of 2-4, each group with a camera. The groups were invited to make their own routes, take about an hour, not stray too far, and take pictures of anything they found interesting along the way. A couple of people who had lived in the neighborhood as children were encouraged to show their groups their former homes and/or any sites they remembered, and to note what was there now. The groups were invited to pay particular attention to things that were beautiful, ugly, surprising, or poignant. We reminded one another that God is already at work in our neighborhood, and that we are invited into that work.

As the groups returned, someone was available to load their photos onto the computer. The groups were then invited to take a few moments of silence in the sanctuary to pray and reflect on the experience. As they returned to the parish hall, people helped themselves to a potluck lunch, and chatted informally about what they had seen.

Once the photos were all loaded (organized into albums by group) and most of lunch had been consumed, each group was invited to narrate its own slide show. The formats varied. Some groups chose just a selected few sites to photograph. Others had taken many pictures along the way, documenting pretty much everything they saw. Some people had chosen themes, and photographed things that fit into those themes. The diversity of approaches kept it interesting.

The Vestry then sat as a group, with the slideshow playing silently on endless repeat. We talked about themes that had emerged, things that had surprised us, questions that arose from what we had seen. We talked about follow-up steps to learn more about the surrounding community, and made plans to share the pictures and reflections with the rest of the congregation.

For the congregational slideshow, the photos were organized to illustrate five or six themes that the Vestry identified. The audience included several people who currently live in the neighborhood, and a number of people who had lived there over the years. The discussion was lively, and we learned a number of things from both the newcomers and the old-timers.

Since our retreat last fall, the Vestry has continued to discern ways to invite engagement between the congregation and the neighborhood, beginning with prayer and Bible study. This experience led us to questions related to our neighborhood. Our follow up has included looking at demographic data from our immediate neighborhood. Using the resource healthycity.org we discovered a couple of significant things:

I’m happy to report that at our 2012 Annual Meeting, the congregation elected a young, bilingual Latina from the neighborhood to the Vestry. With this important step, the Vestry continues on its journey to prepare and include new congregational leaders from among the local members and to more forward in the process of becoming (once again) a neighborhood church. 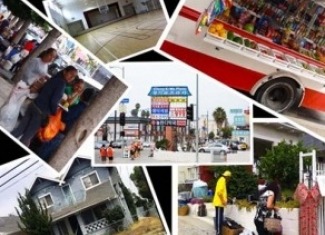